What an Earthquake Taught me About the Meaning of Life 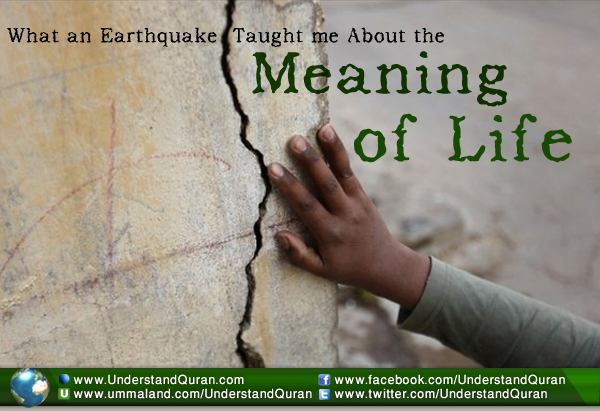 And we will surely let them taste the nearer punishment short of the greater punishment that perhaps they will repent. [Quran, 32:21]

When I look back to my past I’m astonished at how I changed entirely. I was a totally liberal-minded person, very far from religion. I had no concept of prayer or recitation of Al-Quran. I was entirely a man of enjoyment, wasting time in the company of friends and even strangers.

I was born in the area of Azad Kashmir, a state of Pakistan. My early years were passed there and I got my early education from a local school. I wasn’t an outstanding student. There was a religious environment at home but no obligation to do anything. I sometimes prayed but only to copy my parents.

I was working on my master’s degree when a drastic earthquake struck the area. It was the morning of the eighth of October, 2005, when more than 80,000 persons died and the living were all in the same condition, whether rich or poor— homeless and helpless.

God had put the people to a test; I saw the so-called rich begging, I saw the peoples who were much poorer behaving in a very thankful manner towards God; they were begging from God alone, seeking help from Him.

This earthquake had a profound and unforgettable effect on me. For one thing, it convinced me of the goodness of the Muslim Brotherhood. In the struggles that followed, I found myself remembering it again and again and considering Allah (swt).

When I completed my Master’s degree I had a longing to serve humanity but no idea how to go about it. I began my career as an intern with a leading NGO. Right after completion of internship I got an opportunity for a job with the largest Islamic charity in the world. After five years of service I had some conflict with management and resigned.

There followed some difficult years. My challenge was that I had a degree in computer science but no experience related to my education. I got government work and was soon faced with the reality that employers expected a degree of subservience from their workers which should only be given to Allah (swt). I knew in my heart that this was wrong and made a decision not to seek this kind of job any longer.

Moving Towards Confidence in Allah (swt)

Within a few days of having made this decision, I received a call for a job in the capital as Manager of IT. That was my first step towards confidence in God. Miracles started happening with me, but my eyes still weren’t completely opened.

After three month of that job, the project was closed and I was again jobless, but I continued to trust in God. I looked to the life of Prophet Muhammad (saws) and saw that there was no job in his life— he had done business only. So I started my own business with the partnership of a very competent friend. I was managing and marketing and my partner was designing products and delivering.

Drawn Towards the Quran

We both worked hard in that business for a long time without succeeding. I slowly came to terms with the reality that God’s plans were better for us than my own.

During our struggle the month of Holy Ramadan came. I planned to spend this Ramadan as per Sunah and Quran. I returned to my prayers again after a long absence, perhaps for the first time so firmly and regularly. I began to experience forgiveness, thankfulness, humility, and understanding. When I reciting from the Quran I started weeping uncontrollably.

I spent ten days in itikaf. These days gave me, I confidently state it, a new lease on life. It was the most unique feeling to know that I was the guest of the God Who covers the universe, who is creator of all creations, He who has the endless powers. I think it can only be experienced; it’s much too difficult to describe this feeling in words.

After these happiest and most peaceful days I started to understand the Quran.  There was information, wisdom, authenticity, commands, ways forward, trust, planning, management, social relations, public relations, law of state, law of home, and laws for relations. Modern research is all explained well in the Quran.

After this outstanding relation with the Holy Quran, while doing research on the internet for some an old friend got connected with me on a social media website. He let me know about a software house where I might explore my personal IT skills. I contacted them and the next day they called me about a job of Business Development Manager for IT projects. From there I got an opportunity for another job; someone contacted me from Canada and I got paid training to do web projects management, development, budgeting, and financing, and many thing for which peoples pay hundreds of dollars to learn.

We plan many things that fail and but Allah (swt) still makes things happen for us. The best things in my life were not planned by me but rather entered to my life, opportunities that were relevant to my skills, education, and experience.

This is all because of the Quran and its teachings. We just need to have trust in God; He always gives the reward.

My request to all Muslims is, please read the Quran and understand it; we have the solution to every problem there. If we don’t find any solution then God will tell us in His own way.