5 Beautiful Ayaat From the Quran 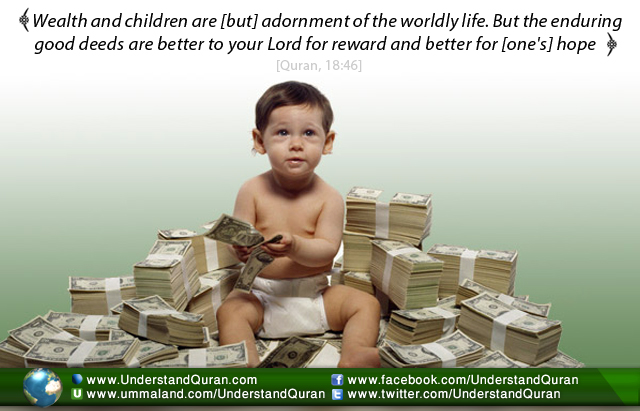 And when My servants ask you, [O Muhammad (saws)], concerning Me – indeed I am near. I respond to the invocation of the supplicant when he calls upon Me. So let them respond to Me [by obedience] and believe in Me that they may be [rightly] guided. [2:186]

Look closely at the ayah. Allah doesn’t say, ‘When My servant asks you about me, say to them I am near.’ It is as if He removes any other person from the conversation and addresses you individually, personally. He is talking directly to you and directly to me. ‘I am near, just call on me and I’ll answer you.’ Can you feel the love that the King of the kings is expressing towards you?

Wealth and children are [but] adornment of the worldly life. But the enduring good deeds are better to your Lord for reward and better for [one’s] hope. [18:46]

Zeenah is something which is ornamental, increasing beauty of something else, but by itself useless. All the worldly possessions which we love are nothing but ornaments. The real useful thing is your deeds which will last eternally.

Human beings are hasty by nature. This is especially true nowadays. Just look at any of the roads in your city during daytime. People are hurrying by, walking in full speed, cars honking as if your life or death depends on overtaking another car. When browsing the net, we become restless when our downloads take a few extra minutes to complete. When waiting for the lift, we press the button several times as if it will make the lift suddenly realize, ‘Oh that guy is in a hurry!’ and run towards us. And in all that hurry we forget about what’s most important – what we’re earning for the Hereafter.

Allah is the Light of the heavens and the earth. The example of His light is like a niche within which is a lamp, the lamp is within glass, the glass as if it were a pearly [white] star lit from [the oil of] a blessed olive tree, neither of the east nor of the west, whose oil would almost glow even if untouched by fire. Light upon light. Allah guides to His light whom He wills. And Allah presents examples for the people, and Allah is Knowing of all things. [24:35]

It is not allowable for the sun to reach the moon, nor does the night overtake the day, but each, in an orbit, is swimming. [36:40]

Every creation of Allah submits to Him in its own way. The sun and moon submit so precisely to the will of Allah that we can calculate time using their movements. They never vary from their course by one second. The night never overtakes the day – they alternate in cycles ordained by Allah. Why does the Quran talk about these things? Why does Allah talk about nature? Not to give us a lesson on geography, but rather on life. If the sun and the moon can worship Allah so smoothly, we can’t we do that? Allah can make us achieve what He has given to the sun and the moon, but we need to put some effort to try to reach there.

*In order to understand the subtle meanings of the Quran, reading translations is not enough. We need to learn Arabic. Start at UQ Academy with our course Learn 50% of the Quran in 9 hours.