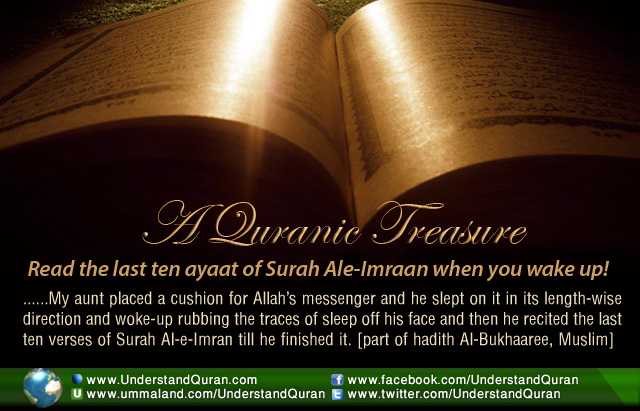 Is the first thing you do when you wake up to grab your phone and check your messages? If so, you’re missing out on an extremely beautiful set of ayaat in the Quran, thus missing a great opportuity to revive a sunnah of the Prophet salallahu ‘alayhi wa sallam in your life!

Get ready to discover a true Quranic treasure and be motivated to cherish it in your routine from now on,  in shaa Allah.

In this week’s central ayah Allah ‘azza wa jall says: Indeed, in the creation of the heavens and the earth and the alternation of the night and the day are signs for those of understanding. [Quran, 3:190]

Ibn Abbas radi Allahu anhu narrates:  One night I stayed overnight in the house of my aunt Maymoonah, and said to myself, “I will watch the prayer of Allah’s Apostle.” My aunt placed a cushion for Allah’s Apostle and he slept on it in its length-wise direction and woke up rubbing the traces of sleep off his face and then he recited the last ten verses of Surah Ale Imraan till he finished it.  Then he went to a hanging water skin and took it, performed the ablution and then stood up to offer the prayer. [Full hadith found in Al-Bukhaaree and Muslim]

Instead of diving quickly into the worldly life, recite the last ten ayaat [Quran, 3:190-200]  first thing when you wake up and you will get rewarded for reviving a sunnah and hasanaat for reciting the Quran, in shaa Allah!

It might take some time to make it a habit, but at least aim to do so each morning, without getting discouraged if you didn’t.  And don’t forget to rub your face with your hands when you wake up, it is a sunnah as well— what an easy reward to gain.

This is an ayah which made the Prophet salallahu ‘alayhi wa sallam cry. Ibn Umar radiyallahu ‘anhu asked ‘Aaishah radiyallahu ‘anhaa: Tell us about the most unusual thing you witnessed from the Messenger of Allah. She cried and said,  All his matters were amazing. On night, he came close to me until his skin touched my skin and said, Let me worship my Lord. I said, By Allah I love your being close to me. I also love that you worship your Lord. He used the water-skin and performed ablution, but did not use too much water. He then stood up in prayer and cried until his beard became wet. He prostrated and cried until he made the ground wet. He then laid down on his side and cried. When Bilal came to alert the Prophet for the dawn prayer, he said, O Messenger of Allah! What makes you cry, while Allah has forgiven you your previous and latter sins? He said:O Bilal! What prevents me from crying, when this night, this ayahwas revealed to me,Verily, in the creation of the heavens and the earth, and in the alternation of night and day, there are indeed signs for men of understanding. Woe to he who recites it but does not contemplate it [Ibn Marduwyah]

If you truly look at the plants, the trees, colours, scents, the light and darkness you will know there is only one Creator. Remember your purpose in life when you are distracted by work, play and family: to worship Him alone and strive for His pleasure above all.

Those who remember Allah while standing, sitting or (reclining) on their backs, and reflect in the creation of the heavens and the earth, (saying): ‘Our Lord! You have not created this in vain. Glory to You! Save us, then, from the Fire. Our Lord! Whomever You cause to enter the Fire, him You indeed bring to disgrace, and there will be none to succour the wrong-doers. Our Lord! Indeed we heard a crier calling to the faith saying: “Believe in your Lord”; so we did believe.
Our Lord, forgive us our sins, and wipe out our evil deeds and make us die with the righteous.  [Quran, 3:191-193]

Now you are looking at everything around you and you know it is all created for a reason and because mankind is given this sense of reasoning, it is only logical we will be asked about what we did with our wisdom. Now you will soon feel a strong conviction the after-life is a reality and you will be asked about your deeds. It is time to make dua: Subhanaka, fa qinaa ‘adhaaban naar – Glory to You! Save us, then, from the Fire!

Allah ‘azza wa jall then mentions another supplication containing three beautiful parts:
Rabbana faghfirlanaa dhunubanaa – Our Lord, forgive us our sins, and cover them.
Wa kaffir ‘annaa sayyi’aatinaa – and wipe out our evil deeds, so they do not even appear in your book of records anymore.
Wa tawaffanaa ma’al abraar – and cause us die with with al-abraar, join us with the righteous.

Recite these beautiful supplications from your heart!

3. Be motivated by the promise of Allah.

Our Lord, and grant us what You promised us through Your messengers and do not disgrace us on the Day of Resurrection. Indeed, You do not fail in [Your] promise. And their Lord responded to them, “Never will I allow to be lost the work of [any] worker among you, whether male or female; you are of one another. So those who emigrated or were evicted from their homes or were harmed in My cause or fought or were killed – I will surely remove from them their misdeeds, and I will surely admit them to gardens beneath which rivers flow as reward from Allah , and Allah has with Him the best reward [Quran, 194-195]

This world is a place of struggle. Paradise is to relax. Know whatever happens, however low you feel or whatever the hardship you encounter in this life and when all people seem to break your trust: Allah made you promises and He will keep them. When you feel weak in willpower to worship or do good deeds, get your act back together by reminding yourself that Allah will never allow one minute of work you did for His sake to be lost, your reward is stored with Him.

Be not deceived by the [uninhibited] movement of the disbelievers throughout the land. [It is but] a small enjoyment; then their [final] refuge is Hell, and wretched is the resting place [Quran, 3: 196-197]
But those who feared their Lord will have gardens beneath which rivers flow, abiding eternally therein, as accommodation from Allah . And that which is with Allah is best for the righteous [Quran, 3:198]

Allah knows that can be hard for you to see the pleasures, so-called freedom and wealth of the disbelievers around you, while you might be struggling to lower your gaze, pray on time and eat halaal. Here Allah ‘azza wa jall timely reminds you life is only temporary and your Hereafter will be full of eternal pleasure, while that of those who didn’t submit to Him will all end in this world. Think about this when you feel jealous!

5. Never compromise your deen for dunya.

Even though describing the Jews and Christians who recognized Islam and did not hide the knowledge they had; you can learn a valuable lesson here.Never ‘hide’ the ayaat or commandments of the Quran by not practising what you know, just because it brings you inconvenience in your job or social circle, just to suit yourself or please others.

6. The keys to success: patience, steadfastness and taqwa.

O you who have believed, persevere and endure and remain stationed and fear Allah that you may be successful [Quran, 3:200]

Al-Hasan Al-Basri said: The believers are commanded to be patient in the religion that Allah chose for them, Islam. They are not allowed to abandon it in times of comfort or hardship, ease or calamity, until they die as Muslims. They are also commanded to endure against their enemies, those who hid the truth about their religion. [Tafseer ibn Katheer]

Allah ‘azza wa jall gives you a beautiful, comprehensive conclusion: be patient in both easy and hard times, keep your focus, know that life is temporary – remember all the promises in the former ayaat.
Be brave against the enemies of Islam and think about Allah at all times!