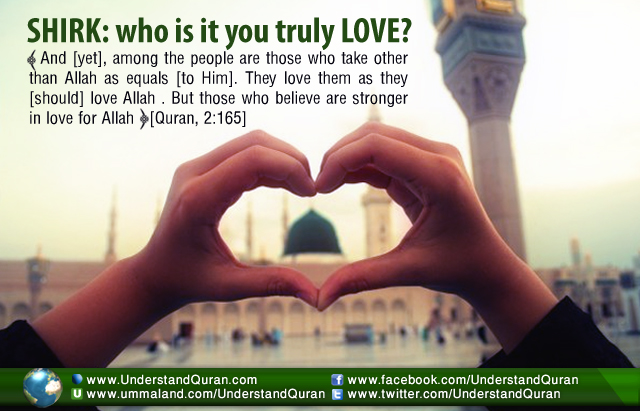 It’s a scary question, but do your actions show you love something else more than you love Allah ‘azza wa jall?

In this week’s central ayah Allah says: And [yet], among the people are those who take other than Allah as equals [to Him]. They love them as they [should] love Allah. But those who believe are stronger in love for Allah. [Quran, 2:165]

How complete is your tawheed?

Rape, abuse, and murder are among the most horrible crimes, and even though they are terrible, the crime of shirk is of a completely different severity, because with shirk you are directing an injustice towards the One  who provided you with everything you could possible need.

The word shirk in Arabic means regarding someone as the partner of another and in sharee’ah terms it means ascribing a partner or rival to Allah. Allah says: Then do not set up rivals unto Allah (in worship) while you know (that He Alone has the right to be worshipped) [Quran, 2:22]  And the Prophet salallahu ‘alayhi wa sallam said: Whoever dies claiming that Allah has a rival, will enter Hell. [Al-Bukhaari, Muslim]

Now, you probably know what major shirk is— for example praying to statues, invoking others than Allah and so on. And you would never do this, right? However, there are other types of shirk which a lot of us slip into. Why? Because in our daily lives we get attached to seemingly halal matters (spouses, children, jobs) and start loving things like we should only love Allah ‘azza wa jall.

For example you would never say, “I love my husband more than I love Allah,” but if you cannot live without him and he becomes your reason for existence, you are in very dangerous waters. “I love my career more than I love Allah.” Would you ever say this? Yet some of our actions show the opposite: some people gladly take a job which pays extremely well but which means they are not allowed to pray any of the prayers. Some people commit suicide because they cannot have children, and this desire becomes their reason for being.

Who are you loving the most with your actions?

The scholars have categorized shirk into different types: ash-shirk ul akbar (major shirk), ash-shirk ul asghar (minor shirk) and ash-shirk ul khaafee (hidden shirk). This is a very broad topic and requires study, however to increase our productivity instantly we will look at some common daily life examples of shirk so you can learn how to avoid them.

1. “Let me ask this peer or saint to help me . . .”
Some people believe that other people are able to bestow mercy, forgive sins, overlook bad deeds, and give blessings like only Allah can. These people are sometimes called peers, saints, or awlyaa and their followers sometimes even invoke them. This is a form of major shirk and means you are ascribing to someone other than Allah something that only belongs to Allah, like Lordship, the sole right to be worshipped, and the divine names and attributes. Only Allah is the source of mercy, forgiveness, and blessings.

2. “Who says you should wear hijaab? I mean it’s not a law here . . .”
Obedience to any authority against the order from Allah is a type of major shirk and is called  shirk-at-Taa’a. An example is a state that makes it illegal to wear the hijaab or have a beard. Allah says: They (Jews and Christians) took their Rabbis and their monks to be their lords besides Allah….The Prophet salallahu ‘alayhi wa sallam said: They (i.e. Rabbis and monks) made legal things illegal, and illegal things legal, and they (i.e. Jews and Christians) followed them; and by doing so they worshipped them. [ Ahmad, At-Tirmidhi, Ibn Jarir] How many Muslims nowadays have an aversion against the sharee’ah?

3. “He is my idol!” With numerous TV programme’s cultivating pop stars, provoking song lyrics and movies people start  admiring, looking up to and loving singers and actors. Shirk-al-mahabbah means that you show the love which is due to Allah alone, to others than Him. This type of shirk also means loving those who Allah hates or hating those who Allah loves. Allah says:  And of mankind are some who take (for worship) others besides Allah as rivals (to Allah). They love them as they love Allah. But those who believe, love Allah more (than anything else)…[Quran, 2:165] Saying ‘He is my idol!’ might seem innocent, but it is a huge problem in the ummah, when you see Muslims preferring listening to music over prayer and loving and imitating singers and actors who disobey Allah!

4. “I swear on my mum’s life!” Venerating people or things in a way that does not go as far as ascribing lordship to them, is an example of minor shirk. Minor shirk includes everything that may lead to major shirk, or that is described in the sunnah as shirk but doesn’t reach the extent of major shirk. An example is minor shirk in words or statements. How many people say: “ I swear on my mum, I wasn’t there!” The Prophet salallahu ‘alayhi wa sallam said:  Do not swear by your fathers, or by your mothers, or by rivals to Allah; and swear by Allah only, and swear by Allah only when you are speaking the truth [Abu Dawood] How many people swear as a habit? Stay away from swearing on people or things and gently advised others to!

6.“ Are they looking? Let’s give some more charity!”
From the types on minor shirk is riyaa’ (showing off). This is an action performed to receive praise or any wordly gain, rather than doing it for the sake of Allah. For example someone who only gives extra charity because people are watching and he wants to seem generous in the eyes of people: he or she does a good deed while loving people praise him/her for it; this is riyaa and it nullifies the deed in which it took place and you get no reward for it. However, it does not nullify any other deeds, like major shirk does. Another examples is beautifying your prayer when people are there. The Prophet said: The thing I fear most for you is ash-shirk ul-asghar. The Sahaabah then asked him: ‘What is the small shirk?’ He replied: Ar-riyaa (showing off).

By now you must realize the scary presence of shirk in many daily life situations and you want to know how to protect yourself, right? The Prophet taught us a crucial supplication:
اللَّهُمَّ إِنِّي أَعُوذُ بِكَ أَنْ أُشْرِكَ بِكَ وَأَنَا أَعْلَمُ ، وَأَسْتَغْفِرُكَ لِمَا لَا أَعْلَمُ
Allaahumma innee a‛oodhu bika an ushrika bika wa ana a‛lamu, wa astaghfiruka li maa laa a‛lam, which means: O Allah, I seek refuge with You lest I should commit shirk with You knowingly and I seek Your forgiveness for what I do unknowingly [Ahmad] Memorize it, really use and convey it to others in shaa Allah!

Praying you will benefit and as Ibraheem ‘alayhi sallam said: . . . and keep me and my sons away from worshipping idols [Quran, 14:35]