3 Aspects of the Islamic Work Ethic 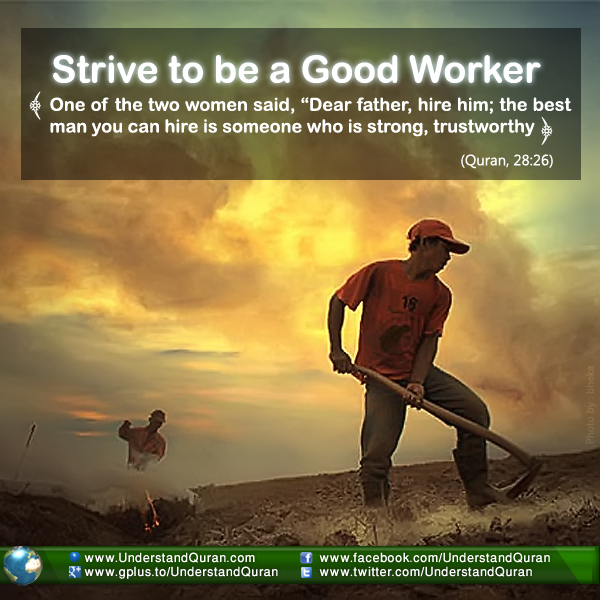 Unlike what stereotypes and prejudices teach the world about Islam, this religion does not excuse laziness. It is quite impressive to examine the concept of work from an Islamic point of view. In fact, there is quite an emphasis on work in the holy Quran. With 360 mentions in different surahs, work (‘amal) has a tremendous value in Islam. Our religion is based on an ideal of practice— thus it is a religion of action!

During the past three months I put the this idea under the microscope. I moved from theory to practice when I accepted a summer job in a factory where I met N.A., a thirtyish electronics engineer and the manager of the workshop where I was employed. I soon saw that N.A. was the model of a hard-working Muslim— clearly a walking example the three aspects of Islamic work ethic: 1). the self, 2). others, and 3). Allah (swt).

1. The worker’s relationship to himself or herself

The Prophet  said: ‘Verily, Allah loves that when anyone of you does something he does it perfectly.’ [Al Bukhari]

Order, discipline, and accuracy— these were the three main things I noticed as soon as I entered the ambience of the workshop. There was no room for laziness! These values, set and maintained by N.A., come under one heading: Itqan (perfection). It was a prime example of what I like to call “healthy perfectionism.”

Once I asked him “what is your principle in work?” He simply answered: “Perfection, even though it’s unreachable— we must do our best to get close to it.”

II. The worker’s relationship to others

The Prophet Muhammad (PBUH) said: ‘Your employees are your brothers upon whom Allah has given you authority, so if a Muslim has another person under his control, he/she should not overburden them with what they cannot bear and if you do so, help them in their jobs.’  [Al Bukhari]

Islam promotes respect, kindness, and loyalty. These elements create an environment where  everyone can enjoy their rights and also where everyone can execute their tasks perfectly. Moreover, equality is  essential to establishing a tolerant group spirit at a workplace. N.A., for example, didn’t like to be called “Mr.”— he wanted to be seen as an equal with the workers.

I remember the director of the plant telling N.A. that he didn’t trust N.A.’s workers, and he accused us of clumsiness. N.A. responded by standing up and answering him, “If you don’t trust my people then you don’t trust me.”

Hard work is one of the most important traits of Muslim men and women alike. A person who seeks Allah’s bounty through hard work is most highly praised, and for that reason work is considered a type of worship.

The prophet (saw) said: The believer dies with his sweat on his brow. [An-Nasai]

To have sweat on one’s brow indicates labour and hard work. When interpreting this hadith, it is clearly shown that the efforts a person makes are taken  into consideration by Allah  once he or she dies, along with his or her other deeds, sins, and virtues. And this  is not haphazard, because Allah already ordered us to go after rizq (bounty, wealth):

And when the prayer has been concluded, disperse within the land and seek from the bounty of Allah , and remember Allah often that you may succeed. [Quran, 62:10]

I remember that N.A. was  always the last to leave the workshop. He never rested , keeping an eye on everything and everyone. He also used to spend hours and even days trying to fix problems. I always admired his patience and his love for his job. And to top it all off, with all the hustle and the bustle around him, he remained a practicing Muslim.

Are you aware that these very ethics are the reason behind the flourishing economy of several countries? Can you believe that these ethics were set 1400 years ago in the Quran and sunnah?