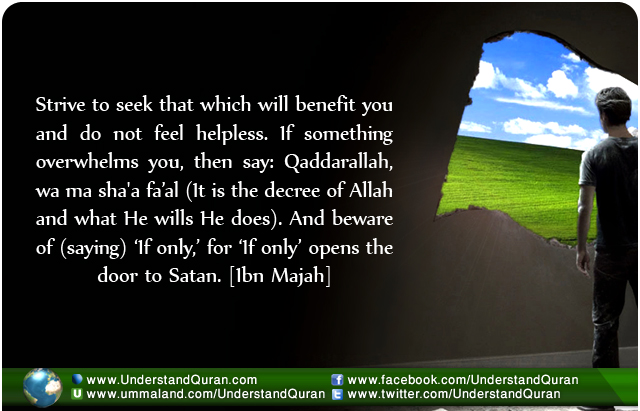 Perhaps you have heard of the myth of the Alchemist’s stone that can turn any ordinary metal into gold. As Muslims, we don’t need a magic stone to turn our messes into golden opportunities. The formula for doing that was provided to us by our beloved Prophet (saws):

However, if you have ever suffered from depression, you’ll know that it is extremely hard to be patient or grateful during such a phase. The cold dark nothingness that grips you gets control over your mind and your life in such a way that there is very little you can do to help yourself. And most of it is often a physiological rather than a psychological ailment. So how to convert this horrible nightmare into an enjoyable experience?

And he [Yaqub] turned away from them and said, “Oh, my sorrow over Joseph,” and his eyes became white from grief, for he was [of that] a suppressor. [12:84]

Stop taking blame on yourself for something out of your control, and half your problem is solved in sha Allah. In order to help you with that, imagine that a friend of yours in the same state as you’re in. They are terribly depressed and sad. How would you treat that person? Would you bully them and tell them it’s all their own fault, or would you try and console them, hug them and make them feel better?

As much as possible, cut down your obligations, tasks, chores etc. Remove as much stress as you can without actually shunning from your core responsibilities. Give yourself a break. Spend time doing the things you want. Don’t feel guilty to watch TV all day if you feel like it. Remember it’s all part of getting better in sha Allah.

Step 3: Make Use of ‘Do-Nothingism’

Dr. David Burns, a specialist in CBT therapy for depression, has coined the term ‘do-nothingism’ in his book, Feeling Good. This is experienced in all regular depressive episodes. You just don’t feel like getting out of bed. Your work starts piling up, and soon it seems like a huge unsurmountable mountain, thus adding even more to your depression. You become more and more hopeless by the day, hating yourself for being so ‘lazy’. In order to make use of this passive phase, remind yourself that you’re not in control of your life anyway. Whatever has happened, happened by the will of Allah. The Prophet strictly forbade us from saying ‘if only’.

Strive to seek that which will benefit you and do not feel helpless. If something overwhelms you, then say: Qaddarallah, wa ma sha’a fa’al (It is the decree of Allah and what He wills He does). And beware of (saying) ‘If only,’ for ‘If only’ opens the door to Satan. [ibn Majah]

So when you think of the ever-increasing pile of chores, say: Qaddarallah, wa ma sha’a fa’al. When you’re feeling too much burden, when you’re in a situation where every attempt of yours is failing to make a way out, rely on Allah. It was Allah’s will that you came in such a state, and all the preceding events that led to it were from His decree too.

He has given this as a test for you, to see whether you let yourself become crushed under the load of self-blame, or whether you throw that load away and lean on Him for support and relax. Having tawakkul really feels very like leaning on an extremely comfortable couch and just relaxing, your heart filling with Allah’s love, for Allah says: ‘Indeed, Allah loves those who rely [upon Him].’[3:159]

He also says: And whoever relies upon Allah – then He is sufficient for him. [65:3]

So let go of all feelings of worry and self-blame, and rely completely of Allah. Let Him take care of the situation.

If Allah should aid you, no one can overcome you; but if He should forsake you, who is there that can aid you after Him? And upon Allah let the believers rely. [3:160]

Step 4: Convert your pain into pleasure

When we’re depressed, we seek out for sympathetic people who’ll listen to us. Most often, we’re disappointed, because most people won’t understand, or can’t give you enough time, or will have cares of their own. But Allah is al Haleem, so why not share with Him? He is always there, waiting for you to talk to Him. Moreover, He understands you better than yourself.

There are such amazing duas for depression in the sunnah of the Prophet that it’s almost worth it to fall into depression just to know these duas.

Dua is one of the best and at the same time easiest acts of worship. Get a print-out of these duas. Pin it near your bed, and say the ones you like any time you want, standing, sitting, lying, crying. Soon you’ll find that you are experiencing an amazing situation – an awareness of Allah, a sense of connection with Him. You’ll start feeling His presence [by His knowledge]. Ibn al Qayyim describes this building of relationship with Allah:

It is possible that a person has a need of something, so he earnestly prays and requests Allah for it until the sweetness of asking and imploring Allah is opened for him. So he enjoys being humbled before Him and trying to draw closer to Him, and he cuts off any relationship or hope for good from anyone else – all of which would never have happened had it not been for his need— to such an extent that he wishes to continue in this state, and prefers it over the actual fulfilment of his need.

Some of those that have recognized have stated: ‘Sometimes, I have a need [from] Allah, so I ask Him earnestly. Then I find that the door of dialogue opens up for me, and I recognise Allah more, and feel humbled before Him, due to which I prefer that the answer to my prayer be delayed, so that this state may continue!’ [from the book Dua the Weapon of the Believer]