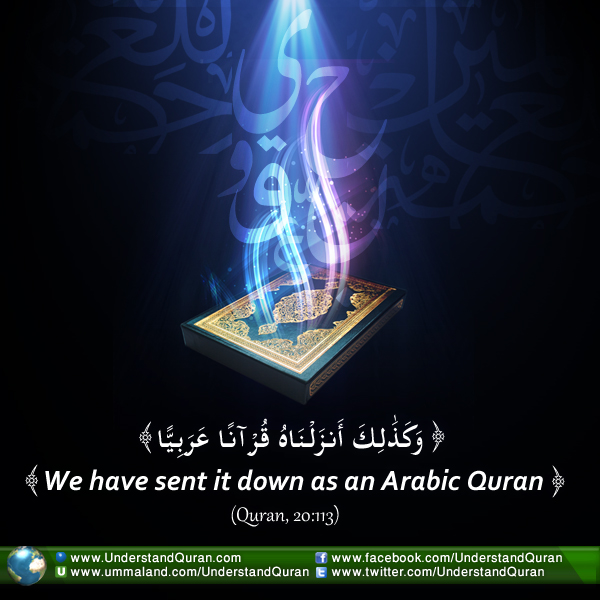 Reading translations of the Quran does help a lot in understanding its meaning, but the unquestionable fact is that translations are simply not enough. They touch only the surface of a vast ocean of meanings. You miss out on a lot of what Allah (swt) is saying to you. You get the feeling that something’s missing, and what’s missing is the power, the miracle that the Quran imparts only to those knowledgeable in Quranic Arabic.

If we don’t know Arabic, we don’t really understand what that thing is which is missing. Here are a few examples of disparity between Quran and its translations.

Al-iltifat a sudden change in the pronoun of the speaker or the one spoken to. There are some iltifat that cannot be conveyed using English translation. Here is an example:

The word al-Insan is singular, denoting that every single human being is individually in loss. But when it comes to extricating oneself out of that loss, we need the help of others and be a unified community. So in the third ayah all the verbs are plural. This is impossible to grasp in translation.

In Arabic as well as in English, a noun denotes stability, permanence, while a verb represents action.

There are some uses of nouns in the Quran whose translation into English will be cumbersome, and so they are translated as verbs.

And those who disbelieve and deny Our signs – those will be companions of the Fire; they will abide therein eternally (khalidun).” (2:39)

A better translation of the word khalidun would be the eternal abiders.

The opposite is also true.

And [mention] when We said to the angels, “Prostrate before Adam”; so they prostrated, except for Iblees. He refused and was arrogant (istakabra) and became of the disbelievers. (2:34)

This word is probably not translatable into English. The correct Arabic for was arrogant would be kaana mustakbirun.

Apart from the singular and the plural, Arabic has an extra number – the dual. It is especially difficult in English to distinguish between dual and plural pronouns and verbs, especially they change rapidly in a sentence:

But Shaytan caused them [dual] to slip out of it and removed them [dual] from that [condition] in which they [dual] had been. And We said, “Go down, [plural], as enemies to one another, and you [plural] will have upon the earth a place of settlement and provision for a time.” (2:36)

In English, the sentence structure is more or less fixed – the subject comes first, then the verb, and finally the object. But Arabic is more flexible regarding this. For example, in surah al-Fatihah, Allah (swt) says:

But elsewhere He says:

In the first ayah, al-hamd comes in the beginning, but in the second ayah the order is changed. This is done do denote exclusivity or to draw attention.

In Arabic, the plurals for an ‘aqil (something that has an ‘aql or intellect, such as human beings and jinns) are different from those for ghayr ‘aqil. Look at the pronouns in the following ayah:

It is impossible to distinguish between the “them”s and “these”s. The pronoun in “all of them” refers back to the names, and names are of course ghayr ‘aqil. But then Allah says He showed “them” to the angels, and the pronoun He uses is ‘aqil. That means that when Allah showed this group of stuff to the angels, some humans or jinns or angels were included in the group.

Tabassum M is a student of MA in Islamic Studies at IOU and an intermediate level student at al-Salam Institute. She also has a degree in Mechanical Engineering and is interested in psychology, sociology, history and current affairs, sharing her reflections at the blog sections of IIPH and Ibana. Contact: tabassum_mosleh@hotmail.com