4 Ways the Prophet Explained the Quran, With Examples (English translation) 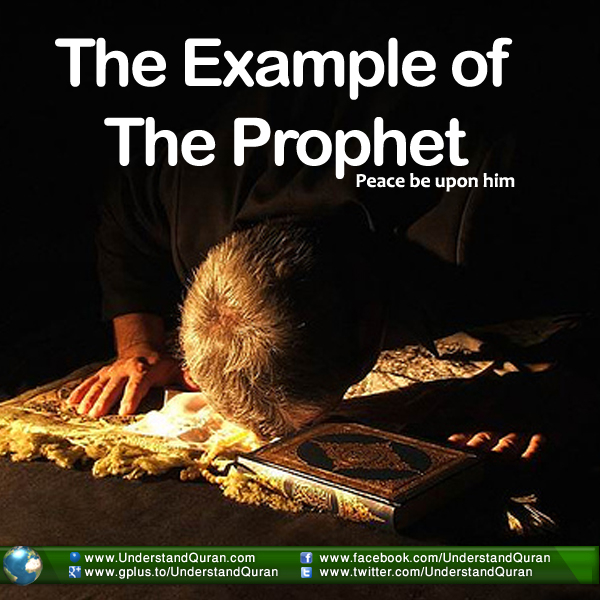 The role of the Prophet (sa) didn’t end with the conveying of the verses of the Quran. He taught his companions, and through them he taught us, the importance of the verses, their usage, and how to implement them in practice. Allah (swt) says:

It is He who has sent among the unlettered a Messenger from themselves reciting to them His verses and purifying them and teaching them the Book and wisdom – although they were before in clear error. [Quran, 62:2]

“Teaching” is vaster in meaning than mere conveying. It involves giving the students the text, then explaining the meaning and demonstrating with examples, and then helping them put the lessons into practice.

Here are four ways in which the Prophet (sa) explained the Quran.

Sometimes the Prophet (sa) would recite a verse and then explain its meaning. At other times, he would say something profound, and then back it up with a verse from the Quran.

‘A surah has just been revealed to me.’ He then recited (Surah al-Kawthar). Then he asked: ‘Do you know what Abundance (al-Kawthar) is?’ They replied: Allah and His Apostle know it better. He said: ‘It is a river of which my Lord, the Exalted, the Majestic has promised me to give in Paradise.’ (Abu Dawud)

‘No people go astray after having followed right guidance, but those who indulge in disputes.’ Then he recited the Verse: ‘Nay! But they are a quarrelsome people. [43:58] (ibn Majah)

Sometimes, when the Companions were confused about certain words of the Quran, they would ask the Prophet (sa) to explain it to them.

When (the following) was revealed: It is those who believe and confuse not their belief with Zulm (wrong) (6:82) – That bothered some Muslims, so they said: ‘O Messenger of Allah! Which of us has not wronged himself?’ He said: ‘It is not that, it is only Shirk, have you not heard what Luqman said to his son: O my son! Do not commit Shirk with Allah. Verily Shirk is a tremendous Zulm (wrong) (31:13).’ (Tirmidhi)

Sometimes the Prophet (sa) was asked questions by disbelievers, often in order to ridicule him – questions about which no revelation had yet come. Allah (swt) gave their answers, beginning with the words: “And they ask you . . .” (Note that not all of these questions may have come from disbelievers)

As I was going along with Allah’s Apostle (ﷺ) in a cultivable land and he was walking with the support of a wood, a group of Jews happened to meet him. Some of them said to the others: Ask him about the Soul. They said: What is your doubt about it? There is a possibility that you may ask him about anything (the answer of) which you may not like. They said: Ask him. So one amongst them asked him about the Soul. Allah’s Messenger (ﷺ) kept quiet and he gave no reply and I came to know that revelation was being sent to him, so I stood at my place and thus this revelation descended upon him: ‘They ask thee about the Soul. Say: The Soul is by the Commandment of my Lord, and of Knowledge you are given but a little.’ [17:85] (Muslim)

Sometimes the Prophet’s speech reflected the Quran even without any direct reference to it. That’s natural for the Prophet, since his whole life was absorbed in the Quran.

Indeed, those who have believed and done righteous deeds – the Most Merciful will appoint for them affection. [19:96]

This was explained by the Prophet in greater detail, though he didn’t refer to the ayah itself:

We find the Prophet following the Quran in every sphere of his life. A more evident example of his direct implementation of the Quran is when surah al-Nasr was revealed.

Aishah (ra) narrated: ‘The Prophet (ﷺ) used to say frequently in his bowing and prostrations: “Exalted are You, O Allah, our Lord, and by Your praise [do I exalt you]. O Allah! Forgive me.” In this way, he was acting on what was explained to him in the Holy Qur’an.’ (Sahih al-Bukhari)

The verse referred to is the following:

Then exalt [Him] with praise of your Lord and ask forgiveness of Him. Indeed, He is ever Accepting of repentance. [110:3]

Learn Tajweed in the English language at Understand Quran Academy.

Tabassum Mosleh is a freelance writer and a student of IOU and al-Salam Institute. She likes playing with animals, watching natural beauties, reading novels and researching interesting topics on psychology, sociology, history and current affairs. She shares her reflections at the blog sections of Understand Quran Academy, IIPH and Ibana. Contact: tabassum_mosleh@hotmail.com