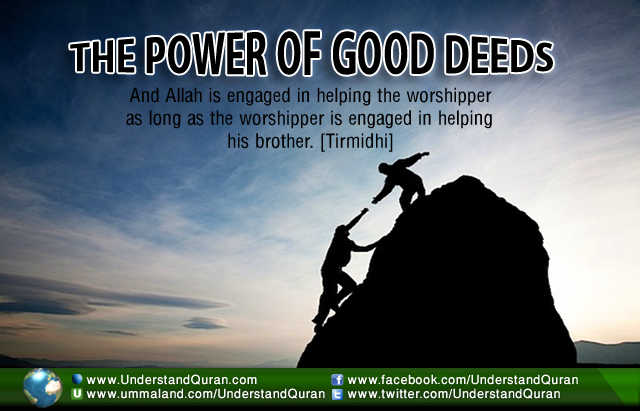 We observe in the lives of many of the pious predecessors that whenever they found an opportunity to do some good they would make the most of it. In the hadiths of our beloved Prophet we find examples of deeds that take very little time and effort to accomplish.

In our busy lives, there are nooks and corners of free time– a few minutes of  waiting in the bus queue, half a minute on the lift, etc. These could be used efficiently if we only took the time to learn a few of these easy-to-do deeds mentioned in the sunnah. Let us look at some of these now.

Whoever relieves a Muslim of a burden from the burdens of the world, Allah will relieve him of a burden from the burdens on the Day of Judgement. And whoever helps ease a difficulty in the world, Allah will grant him ease from a difficulty in the world and in the Hereafter. And whoever covers (the faults of) a Muslim, Allah will cover (his faults) for him in the world and the Hereafter. And Allah is engaged in helping the worshipper as long as the worshipper is engaged in helping his brother. [Tirmidhi]

It takes very little to help our fellow brothers and sisters. It may be leaving your seat in the commuter for an elderly person, or helping someone carry their suitcases at the airport. Even a smile can make someone’s day. Look out for simple things to do for others in your daily life.

The Prophet said, Your smiling in the face of your brother is charity. [Tirmidhi]

Smiling is contagious; if you smile at someone, you feel good inside and want to smile more often. The same is the case for the person you smile at. It’s become such a rarely heeded sunnah that when two Muslims cross each other on the street, they go out of their way to avoid eye contact. Let us break this bad habit! Surprise the other person into smiling, and they’ll perhaps do the same for the next person they meet. Thus you can push the first domino in a chain of good deeds.

There are many adhkars that take so little to do that we take them lightly even though they are immensely rewarding and beneficial to our spiritual health. Revive these adhkar in your daily life. Some examples:

For him who says: ‘Subhan-Allahi wa bi hamdihi (Allah is free from imperfection, and I begin with praising Him, and to Him),’ a palm-tree will be planted in Jannah. [At- Tirmidhi].

If your parents are alive, congratulations! You have a door to Jannah open right there. Take advantage of it by doing something to make your parents happy every day, even if it’s only something small. If they are not alive, make dua for them everyday. You owe it to them.