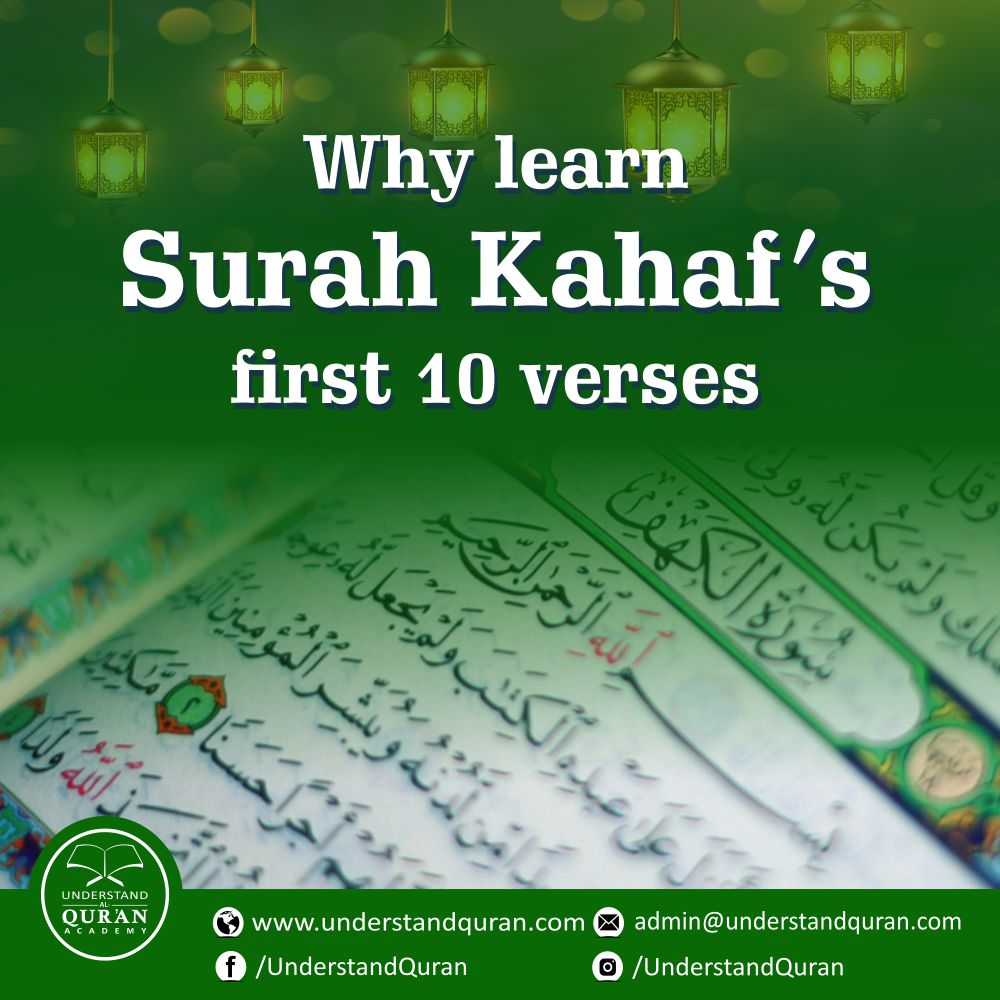 1) Because Prophet (ﷺ) asked us to

He only asked us to do what he did himself. So consider it as a sunnah as well (not just the way of prophet (saw) but of so many companions, successors and so on). I have never come across memorization of any specific surah/ayaat except for this. “If anyone learns by heart the first ten verses of the Surah al-Kahf, he will be protected from the Dajjal.” [Muslim] Though memorization of some surahs is just plain obvious (like Surah Fatiha for the validation of your prayer), but Surah Al-Kahf’s memorization has been specifically talked about. Since Prophet (ﷺ) was so concerned about us (as mentioned in the sixth verse), following his advice is the least we can do.

2) Because memorization is important

Most of us think of memorization as an extra deed, but the following hadith clarifies how hollow your soul is when you have nothing of the Quran in your heart. He who does not memorize any part from the Qur’an he is like the ruined house. [At-Tirmidhi] You might ask, why memorize in the 21st century when we have the Quran preserved by Allah and there are millions of copies and apps for it right at our fingertips, machine memory practically supplanting brain memory? Because to take a verse to heart is to know it by heart. Memorization provides us with knowledge of a qualitatively and physiologically different variety— you take the verse inside you and you know it at a deeper level than if you had simply read it off a screen. What you have in your heart is more easy to access and apply to your life in spontaneous situations. You won’t have to open the copy of it or turn on your mobile for that. Quran holds so much wisdom in it that keeping it in your heart will make you a wise person as well.

3) Because you will be raised in ranks if you memorize

The more you memorize, the higher the rank. Recite and rise up and be increased in reward with every Ayah. [Tirmidhi] Memorization doesn’t only mean to save it in your heart but also to absorb it deep within. So much so that Quran could be seen on you. People could tell, just by looking at you, that you have memorized the Quran or a part of it. The character of Prophet (ﷺ) was the Quran, as narrated by Aishah (RA).

4) Because memorizing is a source of peace and tranquility

In a world full of turmoil, we could all use a moment of serenity. “A man was reciting Surah Al-Kahf and his horse was tied with two ropes beside him. A cloud came down and spread over that man, and it kept on coming closer and closer to him till his horse started jumping (as if afraid of something). When it was morning, the man came to the Prophet, and told him of that experience. The Prophet (ﷺ) said, “That was As-Sakina (tranquility) which descended because of (the recitation of) the Qur’an.” [Bukhari]

5) Because memorizing teaches you the fundamentals of Islam

6) Because memorizing increases your Imaan (faith)

Surah Al-Kahf has many stories in it that teach you so many practical lessons to implement in your daily life. But the first ten verses help you to develop a strong connection with Quran because there is no possibility of deviation in it (as mentioned in the first and second verse). How do we know that Islam is the ultimate truth? It’s the Quran. No matter how languages evolve, cultures change or standards twist, this one book will never change. No matter how many winds swirl, the whole forest may fall to the ground, but this tree shall stand still, embed in its ground. There’s a war being raged against it. War of values before the war of Dajjal is upon us. We have something we can hold onto because it will stay the same till the end of time. So if you want strength, you come to this book. You want to just fear Allah and not Dajjal or anyone? This book has an answer. It will increase your Imaan (faith) inshaAllah.

7) It gives you a goal to achieve in this world.

This worldly life is a test for all of us (as mentioned in the seventh verse) as to how many among us struggle towards the best of deeds. Not the most but rather the best. Allah is not looking for quantity but quality. Contrary to our belief that hardships are a test from Allah, here Allah tells us that the adornment of this earth (wealth, beauty, spouses, children, fame etc.) is also a test for you. Whoever uses these blessings in the best of ways, receives the glad tidings. The best of rewards are for the best of deeds.

8) It’s a shield against Dajjal (Antichrist).

Prophet (ﷺ) warned us ahead of time that— Between time of the creation of Adam (AS) and the Resurrection Day, there is nothing greater than the trial of Dajjal (the Antichrist). [Muslim] When I see the situation in some parts of the world nowadays, I usually think it can’t get any worse. But it will. That’s why Prophet (ﷺ) used to seek Allah’s refuge from Dajjal in his prayer. When any one of you utters Tashahhud (in prayer) he must seek refuge with Allah from four (trials) and should thus say: “O Allah! I seek refuge with Thee from the torment of the Hell, from the torment of the grave, from the trial of life and death and from the evil of the trial of Masih al-Dajjal (Antichrist).” [Muslim] He will be a combination of every tribulation, man has ever known. Trial of wealth (what owner of the two gardens suffered), power (taught through Dhul-Qarnayn’s story), knowledge (as learned in Musa (AS) and Khidr’s story) and faith (what people of the cave went through). Prophet (ﷺ) said: . . . Those of you who live up to his time should recite over him the opening verses of Surah Al–Kahf, for they are your protection from his trial . . . [Abu Dawood]

9) To be companions of Prophet Isa (AS)

Imagine Isa (AS) repeating what he said once to his Hawaariyyoon (disciples)— Who are my supporters? my companions for the sake of Allah? and you answering— we are supporters for Allah. But for that, you need to survive the Fitna (trial) of Dajjal and to protect yourself, you need to first memorize Surah Al-Kahf’s verses and then live them as well. But you may say that you won’t be living until that time. First of all, who knows? Time is in Allah’s hands. He may stretch it or shrink it and the hour may be upon us while we are unaware of it. Secondly, if it doesn’t happen in your time, your later generations will be faced with that trial nonetheless. So, to teach them these verses, you need to know them first yourself. Don’t you wish that the believers whose faces will be wiped by Isa (AS) (who will tell them their status in Paradise), are among your generations? Something that will raise your ranks in Jannah as well inshaAllah. Think ahead as Ibrahim (AS) did. Allah indeed accepts the Du’aas but for that we need to put some effort too. Back in our ancestry, maybe there were companions of the Prophet (ﷺ) or may be prophets themselves (after all we all are from Adam (AS), Nuh (AS) who was Adam-e-Thaani) and may Allah make our generations, down the line, as one of the Hawaariyyoon.

The tenth verse is a wonderful Du’a which those young people of the cave (who Allah presented as role models for the youth) made. So, every time you recite these verses, you make this Du’a also, asking for Allah’s special mercy (since the word min-ladunka is used, which is superior to words min-doonika or min-indika— all meaning the same in English but in Arabic, each of them has a specific meaning). Grant us mercy, very close and near to You, our Rabb, that comes especially from Your secret vaults. Guidance, forgiveness, and provision.

1) Listen to these verses on repeat, till they roll on your tongue automatically. Listen to them while traveling, driving, cooking, cleaning etc. 2) Once you are done with the listening part for few days or hours (depending on every individual), keep the Quran in front of you to see the text while you listen to the verses. Listening also helps keep your Tajweed right. 3) Don’t forget memorizing the translation with it for better understanding. 4) Train your brain with impression. Be impressed with the text. Stop and picture a scene in your mind to make the impression stronger. 5) Associate – Link the text to something you already know. 6) Repeat with your tongue (aloud) – The more you repeat, the more you remember. 7) Don’t say to yourself that you can not memorize because of your bad memory. Because to improve a bad memory, you need to memorize anyway. Believe in yourself that you can! Battle the bad with the good. 8) Once you have memorized them, recite them in your prayer. Break them down to five verses each Rak’ah for ease. Practice makes a person perfect. 9) Make someone take your oral test. 10) Last but not least, don’t worry because Allah will save it in your heart InshaAllah. Just trust Allah and do it. “And We have certainly made the Quran easy for remembrance, so is there any who will remember?” [Quran, 54:17] May Allah help you all with the memorization of it. I would love to know which one of you memorized it, in the comments below.   About the author: Samina Farooq is an engineer by qualification, a Qur’an student by occupation, a photographer by eye, a writer by heart, a Muslim by soul.