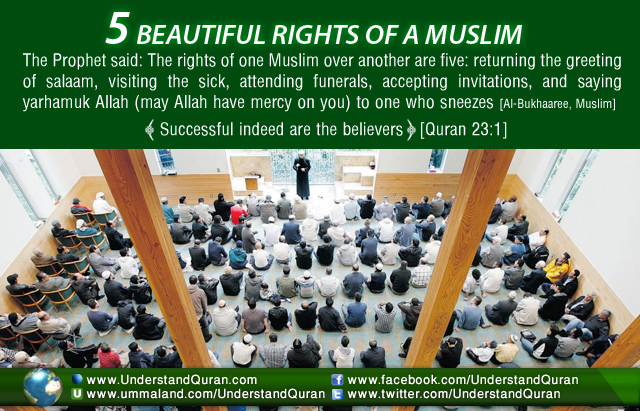 Did you know that there are specific rights that we as Muslims have over others? If you do know these rights, do you do your best to fulfil them in your daily life?

The Prophet salallahu ‘alayhi wa sallam said: The rights of one Muslim over another are five: returning the greeting of salaam, visiting the sick, attending funerals, accepting invitations, and saying yarhamuk Allah (may Allah have mercy on you) to one who sneezes. [Al-Bukhaaree, Muslim]

Some people ask: will we be sinning if we don’t fulfil the five rights in the above hadith? The answer is that there are many rights we as Muslims have over another, some of them being individual obligations (fardh), which means that if you do not fulfil them you will incur a sin upon yourself. Other rights are communal obligations (fardh kifaayah), meaning that if some people do them, others are not obliged to do so.

1. Return the salaam!
This is obligatory if the greeting of salaam is given to you individually. If someone says assalamu ‘alaykum to a whole group; then it is obligatory upon the group, which means one person of the group can return the salaam and the sin is waived from the others, but if all of them respond, they have all done what is required [explained in al-Mawsoo‘ah al-Fiqhiyyah]. So replying to the salaam is the bare minimum.

Why not revive the sunnah and gain huge rewards by initiating the salaam? The Prophet said:  You will not enter Paradise until you believe, and you will not believe until you love one another. Shall I not tell you about something which, if you do it, you will love one another? Spread salaam amongst yourselves.[Muslim and others]

Action: tell others about the rights of other Muslims to return their salaam and encourage others to initiate the salaam!

Action: The beauty in Islam is that we should not only visit the sick we know, but also those we don’t know, as we are doing it for the sake of Allah and His reward. Form a group in your community of those  who visit the sick, and teach children the reward.

Revive the sunnah by saying these supplications:
1. La ba’s, tuhoor in sha Allaah (No worry, it is a purification, if Allah wills). [Al-Bukhaaree]
2. Ask for the person to be healed three times: The Prophet visited Sa’d ibn Abi Waqqaas and said: ‘O Allah, heal Sa’d,’ three times. [Al-Bukhaaree, Muslim]
3. Place your right hand on the sick person and say, as the Prophet did:  Adhhib al-ba’s Rabb an-naas, wa’shfi anta ash-Shaafi, laa shifaa’a illaa shifaa’uka shifaa’an laa yughaadir saqaman (Take away the pain, O Lord of mankind, and grant healing, for You are the Healer, and there is no healing but Your healing that leaves no trace of sickness). [Muslim]

3. Attend a Muslim funeral.
This is also a communal obligaton, but you should motivate yourself to attend a funeral by considering this great reward:  (A believer) who accompanies the funeral procession of a Muslim out of sincere faith and hoping to attain Allah’s reward and remains with it till the funeral prayer is offered and the burial ceremonies are over, he will return with a reward of two Qirats. Each Qirat is like the size of the (Mount) Uhud. He who offers the funeral prayer only and returns before the burial, will return with the reward of one Qirat only. [Al-Bukhaaree]
Note: the reward for praying the funeral prayer (janaazah) is for both men and women, however women should not follow the funeral procession to the graveyard.

Action: Learn how to perform the janaazah prayer and be alert to funeral processions happening in your community. When you hear of a janaazah, share the announcement so both the deceased, the family, and the attendees of the janaazah prayer can gain benefit, inshaa’Allah. The more believers praying for a deceased person the better. When you hear the news of death read the supplication from the ayah: Who say, when afflicted with calamity: Innaa lil-llaahi wa inna ilayhi raji’oon (Verily, to Allah we belong and to Him is our return. [Quran,2:156]

Action: It is recommended that before attending a wedding we enquire about the situation, i.e. that we ask if there will there be free mixing of men and women, if music be played, etc.

5. YarhamukAllah!
The scholars differ if it is obligatory (fardh), a communal obligation (fard kifaayah) or a sunnah to say Yarhamuk Allah (May Allah have mercy on you) to one who sneezes.
The stronger opinion is that it is obligatory on the one who hears the sneezer praise Allah (by saying “alhamdulillah”), because the Prophet said: Allah likes the act of sneezing and dislikes the act of yawning, so if any one of you sneezes and praises Allah (says alhamdulillah), it is a duty on every Muslim who hears him to say to him yarhamukAllah) [Al-Bukhaaree]

Action: Encourage others to say ‘alhamdulillah’ when they sneeze and make sure you respond with yarhamukAllah; and teach children this habit. When you say yarhamukAllah, the one who sneezed should respond with: yahdeekumAllah wa yuslih baalakum (may Allah give you guidance and improve your condition) as instructed by the Prophet and reported in Al-Bukhaaree.

O Allah, enable us to fulfill the rights of others and encourage others to do so, ameen.

Note: In another narration the Prophet added the right of giving sincere advice: The rights of one Muslim over another are six.” It was said: What are they, O Messenger of Allaah? He said: “If you meet him, greet him with salaam; if he invites you, accept the invitation; if he asks for advice, give him sincere advice; if he sneezes and praises Allaah, say Yarhamuk Allaah (may Allaah have mercy on you); if he falls sick, visit him; and if he dies, attend his funeral [Muslim]