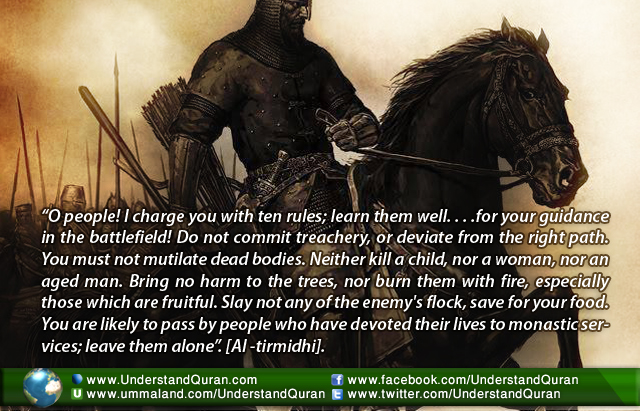 Lately I had a conversation with a non-Muslim about how Muhammad (saws) wasn’t as “holy” as we affirm. When I asked him about his sources, he replied, “Well, it’s all over the news and social media.”

This small chat made me think: What if I weren’t a ‪Muslim, had never met a Muslim, and all I knew about ‪Islam and Muslims was what I’d seen on TV? How would I feel?

We need to work to abolish these stereotypes about Islam and Muslims and to show the world what Islam really is. But our responses must reflect the teachings of the gentle and merciful character of the prophet.

Let’s have a look at two of the more widely held myths:

Myth #1: Muhammad married multiple women to satisfy his own desires.

Muhammad married 11 women. However, most of them were either widowed or divorced. Many of these marriages took place in order to help the divorced and widowed women. Other marriages were entered into to strengthen political bonds.

The social structure of the time was not hospitable to widows or women living alone. And in the society of that time (1400 years ago, in the middle of the desert ), these marriages were regarded as acts of nobility and kindness. Marriage was considered an act of protection and compassion, not only as a source of pleasure.

Islam protected women, as it does today. As one example, one of the prevalent customs in that society was to banish “wives” into limbo by declaring them to be their husband’s “mothers,” (the practice was called Zihar). Islam abolished this practice by allowing divorced women to remarry, thus restoring women’s position and prestige within the society.

Early accounts also indicate that the Prophet’s dealings with his wives were based on love, affection, respect and dignity, others in the society were expected to follow his exemplary behavior.In a hadith, Muhammad (saws) said : the best of you are those who are the best to their wives .[At-Tirmidhi].

Also, The prophet’s first marriage, to Khadija, was based on mutual love and respect. She died in her mid sixties, and he was to mourn her until his own death 13 years later.

Myth #2: Muhammad was a prophet of war.

Muhammad (saws) was a pacifist par excellence. He had a strong aversion to violence except to defen the innocent; he constantly proclaimed, for example, his willingness to declare war for the sake of defending the Jews in Medina and Christians in St. Catherine’s Monastery. In Addition, for 12 years,Muhammad (saws) was passively resistant to the physical harassment organized against him and his followers in Mecca. There was a constant urge from Allah, shown in the Quranic verses, to pay no attention to the attacks.

Keep to forgiveness (O Muhammad), and enjoin kindness, and turn away from the ignorant. [Quran 7:199]

Yes, Muhammad (saws) went to war— after, as I mentioned previously, 12 long years of putting up with emotional and physical harassment, and only at the permission of Allah (swt).

Permission [to fight] has been given to those who are being fought, because they were wronged. And indeed, Allah is competent to give them victory. [Quran, 22:39]

Thus, the permission—not commandment— to fight is given in the interests of defense.

[They are] those who have been evicted from their homes without right – only because they say, “Our Lord is Allah.” And were it not that Allah checks the people, some by means of others, there would have been demolished monasteries, churches, synagogues, and mosques in which the name of Allah is much mentioned. [Quran, 22:40]

This verse is citing one rule of war, which is that fighting must protect temples, churches, synagogues, and mosques— ergo, universal religious freedom!

In a hadith Muhammad (saws) also commanded the following uncompromising rules of war:

O people! I charge you with ten rules; learn them well… for your guidance in the battlefield! Do not commit treachery, or deviate from the right path. You must not mutilate dead bodies. Neither kill a child, nor a woman, nor an aged man. Bring no harm to the trees, nor burn them with fire, especially those which are fruitful. Slay not any of the enemy’s flock, save for your food. You are likely to pass by people who have devoted their lives to monastic services; leave them alone. [Al-Tirmidhi]

Thus, the rules of war set by Muhammad (saws) give the green light only for defensive fighting, while they strictly prohibit inflicting harm on humans, animals, or property.

In the end, no wonder that this man is the most influential man in History according to Michael H. Hart’s The 100: A Ranking of the Most Influential Persons in History. (1978)

The Quran emphasizes that Muhammad (saws) is “aught but a man” [Quran 17:93], a messenger of Allah who came during a time of moral confusion and disorganization. He challenged the established system with a new perception of social justice. Muhammad (saws) came with a message of unity, a message that asserted that we all have one lord which is Allah (saw), and above all a message of peace.