10 Tips for Relating to Non-Muslims 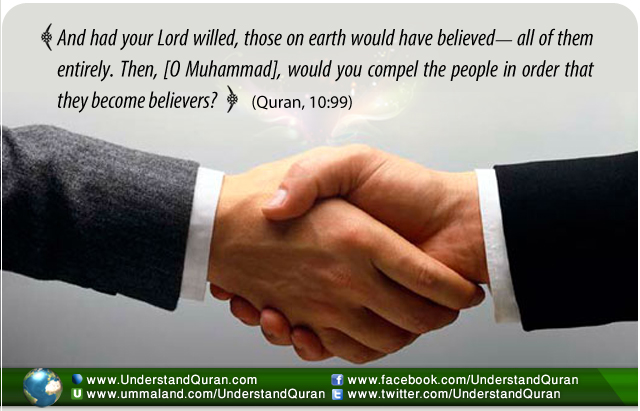 Many non-Muslims have a bad impression of us— they think of Muslims as a bad community with strange thoughts, or, at worst, as terrorists. Why do they think of us like this? Who has portrayed us in such a bad way, and why are we silent and unable to prove ourselves?

The main reason is our attitudes toward other communities and our ways of dealing with them. The Quran has beautifully shown us how to deal with non-Muslims, so let’s focus on what it has to say.

I have seen many Muslims trying to thrust non-Muslims into the fold of Islam, but it’s a bad move that can create the wrong idea. It is only Allah who grants hidayat, and He grants it to those who are paying attention, not to those who are heedless.

There is no compulsion in religion. Certainly, right has become clearly distinct from wrong. Whoever rejects the devil and believes in God has firmly taken hold of a strong handle that never breaks. God is All-hearing and knowing. [Quran, 2:256]

We tend to give a higher priority to Muslims than to others. But Islam insists we avoid such acts and maintain justice in everything. No matter whether they are Christians, Jews, Hindus, or whatever, we must treat them justly and allow them to enjoy their rights without restrictions.

O you who have believed, be persistently standing firm for Allah, witnesses in justice, and do not let the hatred of a people prevent you from being just. Be just; that is nearer to righteousness. And fear Allah; indeed, Allah is Acquainted with what you do. [Quran, 5:8]

When we are in discussion with non-Muslims we shouldn’t try to emphasize our points by arguing; instead we should try to be as gentle as possible by keeping in our minds that we are doing all this for the sake of Allah.

And do not argue with the People of the Scripture except in a way that is best, except for those who commit injustice among them, and say: We believe in that which has been revealed to us and revealed to you. And our God and your God is one; and we are Muslims [in submission] to Him. [Quran, 29:46]

The most vital characteristic that should be adopted when dealing with non-Muslims is kindness, because it’s most often kindness that brings a change in the minds of non-Muslims toward us. At the very least, smile!

Allah does not forbid you to deal justly and kindly with those who fought not against you on account of religion and did not drive you out of your homes. Verily, Allah loves those who deal with equity. [Quran, 60:8]

Nonetheless Allah has commanded us not to be kind to non-Muslims who plot evil against us.

It is only as regards those who fought against you on account of religion, and have driven you out of your homes, and helped to drive you out, that Allah forbids you to befriend them. And whosoever will befriend them, then such are the Zalimun (wrong-doers those who disobey Allah). [Quran, 60:9]

Islam is not a religion of conflict, rather it is a means of creating peace all over the world. We are never encouraged to abuse non-Muslims in any way— even breaking their idols is considered to be a bad act in Islam.

Abuse not those to whom they pray, apart from God, or they will abuse God in revenge without knowledge. [Quran, 6:108]

Laughing sardonically is also considered a form of abuse. So do not laugh when they say something pertaining to their religion.

6. Help them when they are in need.

No matter what religion they belong to, we must help them when they are in need. It’s a weak point among us that we think helping them would lead us astray, but it will never lead you to such a situation if you act as a real Muslim. The more you show your attitude as a true Muslim, the more they will be attracted towards our religion, and this will pave the way for them to escape the darkness in which they reside.

And if any one of the polytheists seeks your protection, then grant him protection so that he may hear the words of Allah. Then deliver him to his place of safety. That is because they are a people who do not know. [Quran, 9:6]

As Muslims, it is very important to think before we act, so be wise when speaking with Non-Muslims; do not jump at once and make them feel irritated. Pay your fullest attention when they speak. Even if you feel bored in their company, do not express it with your words or actions. Earnestly listen to them, and if you need to clear up any misconceptions in between, speak directly and politely. If you do not know, direct them to a well-known website or to an Islamic scholar.

Call to the way of your Lord with wisdom and goodly exhortation, and have disputations with them in the best manner. [Quran, 16:125]

Sometimes conflicts emerge between us and non-Muslims, but do not show your anger when this happens. Just turn away and leave, for that is the best thing a Muslim can do on such occasions. Even if you happen to meet them later, do not show anger, resentment, or annoyance towards them.

Show forgiveness, enjoin what is good, and turn away from the foolish (i.e. don’t punish them). [Quran, 7:199]

9. Treat them with respect.

The main problem that persists between us and non-Muslims is that we mostly fail to treat them with respect. We think that it isn’t so good to do so since they are disbelievers, but it’s important to give proper respect to their rights. If disbelievers were to be treated disrespectfully, Allah wouldn’t have sent our Prophet as a mercy to all of humanity.

Some of us try to cheat non-Muslims, thinking that they will believe us because we are Muslims. This is really very bad behavior, because Muslims are not to cheat, but rather to be honest with everyone. They don’t judge us by our words as much as by our actions.

Woe to those who give less [than due], who, when they take a measure from people, take in full. But if they give by measure or by weight to them, they cause loss. [Quran, 83:1-3]