To Be or Not to Be—Modest 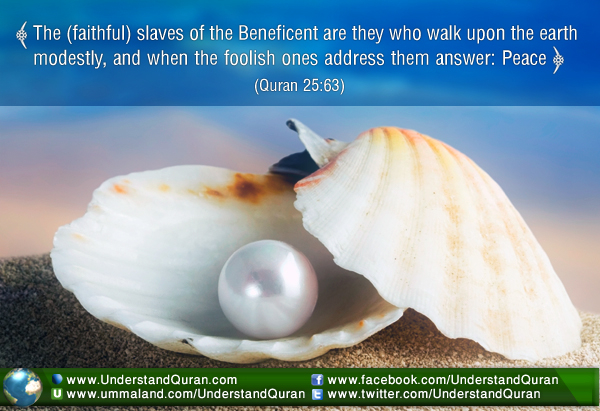 We struggle day to day with the temptations of Shaytan. If our hearing, sight, and speech aren’t impaired, we must remain strong and— through modest character and love for Allah (swt) and all of His creations— show the world how Islam is the true way of life.

The word haya’, or modesty, is derived from the word al-hayah, which means life. What do we get from this? That a person who has no haya’ is like a person who has no life. It was recorded by al-Bukhari and Muslim that: Al-Haya’ is part of Iman and Haya’ doesn’t produce but goodness.

Allah (swt) knows us better than we know ourselves. We can’t hide anything from Allah (swt), so it’s best to try to avert negative thoughts with the remembrance of Him. The more you contemplate negative and harmful things, the more dangerous these thoughts become, since they may lead to ill speech or actions.

Did they not know that Allah knows their secrets and their private conversations and that Allah is the Knower of the unseen? [Quran, 9:78]

Words in the form of gossip, backbiting, and slander can often be the cause of much pain. Avoid hurting others and harming your own soul; talk gently and respectfully and, as the old saying goes, if you have nothing nice to say, say nothing at all. Always remember Allah (swt) and know that he hears your every word. Aren’t you ashamed when you realize that the Magnificent is hearing filth spewing from your mouth?

And be moderate in your pace and lower your voice; indeed, the most disagreeable of sounds is the voice of donkeys. [Quran, 31:19]

Allah (swt) loves those who are kind and who act in a respectful manner towards all, ourselves included. Just remember that we’re the face of Islam— do we really want to act like fools and be rude, shameful, or lewd? The best way to change the hearts of those who don’t believe is by being modest, forgiving, and patient, even when wrong has been done.

Men and women alike should dress in a way that’s modest and doesn’t show the figure or too much skin. Intention is important here, as in many countries it can be difficult to find affordable clothing that is pleasing to Allah (swt) but not to other men and women.

The best thing to do in regards to dress is to look in the mirror ask yourself, “Can I pray to Allah (swt) wearing this?” If the answer is no, make the necessary changes in order to please Allah (swt) and to protect yourself from wandering eyes and thoughts.

A Message for Believing Men

In many societies today men and women must work and go to school together and also live with others who have differing faiths and even with those who have no faith. Allah (swt) reminds you that you must be strong in resisting the temptation to build relationships with “friendly” women, no matter how pleasing they may seem to the senses.

Say to the believing men that they should lower their gaze and guard their modesty: that will make for greater purity for them: And Allah is well acquainted with all that they do. [Quran, 24:30]

The Prophet Muhammad (saws) recognized this difficulty and was known to have said, I have not left behind me any fitnah (temptation) more harmful to men than women. (Narrated by al-Bukhaari, Muslim). The best action to take is one that our beloved prophet (saw) would have taken: be modest and avoid the temptation. A smile and casual conversation may seem innocent, but we should avoid these things so that we can protect ourselves from major sin.

A Message for Believing Women

Be modest in dress by not showing your figure and skin. Don’t display a flirtatious nature or act in a way that brings attention to your attributes, and remember Allah (swt) is the Hearer, Knower, and Seer of all that we do. (You can read inspirational stories of other Muslimahs and their struggles with hijab here.)

Being modest only leads to goodness, as men will avert their eyes and you won’t be objects of temptation or lust. Be proud to be a muslimah and seek Allah (swt) and his protection and guidance. Let us be a point of inspiration for other women who feel they must use their treasure from Allah to purchase respect and happiness at a shameful price. Let us show the world that we are strong, intelligent, and compassionate women who love and obey only Allah (swt)!

Modesty of Angels and Jinn

The modesty of angels and jinn was simply yet beautifully explained to me by our brother, and in shaa allah he will be blessed by Allah (swt) for his eagerness to share his knowledge.

Jinn are a creation of Allah (swt) and He has given them free will and the choice to either follow Islam or to reject it as has been given to humans. The rules regarding modesty apply to human kind and Jinn kind, and the Jinn will be judged alongside man and held accountable for any corruption they spread in the lands.

Angels are the creation of Allah and have no choice of their own. Their sole existence is to perform whatever acts Allah (swt) ordains for them and to record and report the actions of man with no delay. The angels are humbly submissive and modest at all times, as this is how Allah (swt) willed them to be. Let the modesty of the angels be an example to us.

Alhamdulillah, the Quran gives us the guidance we seek that will help us on our journey in this life to be modest; Allah (swt) gave us the best of examples through our beloved prophet Muhammad, peace be upon him, whose humble and modest character was the force that inspired change for thousands of people who embraced Islam.

I will leave you with words of our Creator; through Allah Him only will we be shown the truth and guided to the straight path, in shaa Allah:

Vanessa M. is studying health and natural healing and ambitiously hopes to strengthen the imaan of the ummah through writing.