The Spider in the Quran (Understand Quran Online) 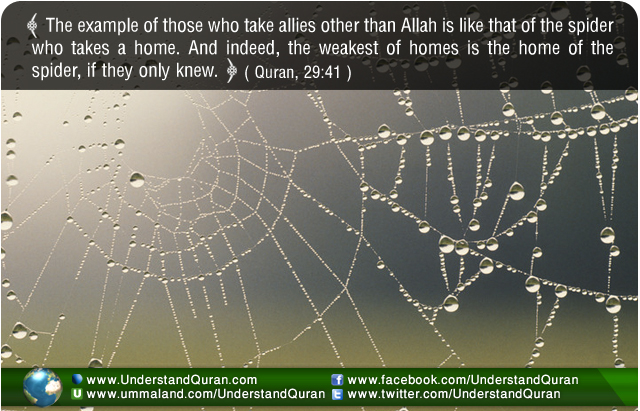 Allah the Exalted gives many different kinds of examples in the Quran in order to explain to us various lessons. He says (translation of the meaning):

And We have certainly diversified in this Qur’an for the people from every [kind of] example; but man has ever been, most of anything, [prone to] dispute. [18:54]

…. and that those in whose hearts is hypocrisy and the disbelievers will say, “What does Allah intend by this as an example?” Thus does Allah leave astray whom He wills and guides whom He wills. And none knows the soldiers of your Lord except Him. And mention of the Fire is not but a reminder to humanity. [74:31]

Some of these examples are quite straightforward and amazing. For example:

And present to them the example of the life of this world, [its being] like rain which We send down from the sky, and the vegetation of the earth mingles with it and [then] it becomes dry remnants, scattered by the winds. And Allah is ever, over all things, Perfect in Ability. [18:45]

But there are some examples that are highly intriguing. There are several layers to their meanings, and it they need heavy pondering and even research in order to extract their wisdom. Allah says,

And these are the examples We give for mankind; but none will understand them except those who have knowledge. [29:43]

Once you extract the wisdom of these examples, you’re awed by what you find. Let us look at one such example.

Allah talks about the disbelievers mentioned in the Quran and the nations whom He destroyed. Then He gives the following metaphor:

The example of those who take allies other than Allah is like that of the spider who takes a home. And indeed, the weakest of homes is the home of the spider, if they only knew. [29:41]

Indeed, Allah knows whatever thing they call upon other than Him. And He is the Exalted in Might, the Wise. And these examples We present to the people, but none will understand them except those of knowledge. [29:42-43]

The primary meaning of this example is obvious. The spider makes homes by means of fine silk webs that it produces. It’s very flimsy and easy to destroy. One strong draft of wind can blow it away. That is the similitude of those who call upon deities other than Allah. These deities are false and therefore provide no real support to these people, and in the Hereafter they will not save them from the Hellfire. Allah says,

The second meaning which can be derived from the verse concerns the word ‘bait’. It can mean ‘house, apartment’ etc., or it can mean ‘family, home, household’.

The interesting fact is that the female spider does not make a good home. In fact, it sometimes eats its husband if it gets hungry. This feature is called sexual cannibalism, it occurs only in arachnids and a few other insects, and it very rarely occurs the other way round, i.e. a male eating a female.

A point to be noted here is that Allah uses the word ‘ittakhadha’ when He says ‘takes a home’, not ‘bana’ meaning ‘builds a home’. This word has been used in another place in the Quran in the meaning of ‘taking a wife’:

And [it teaches] that exalted is the nobleness of our Lord; He has not taken a wife or a son. [72:3]

This may be an indication in favour of the second meaning which I have presented above.

If the second meaning can be depended upon, then what Allah is saying is this: the similitude of those who call upon other than Allah is like that of the spider who takes a cannibal as a wife. What he is calling for is destruction.

In order to understand the subtleties of the Quran, learn Arabic at Understand Quran Academy.