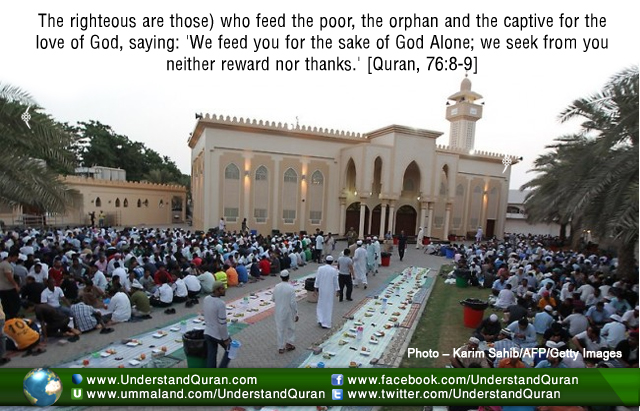 We often think of food as just being fuel for the mind and body. With the right intentions, everything in this world, including food and drink, can also be nourishment for the soul. This Ramadan, consider pondering the barakah of the food and drink from which we will be abstaining for 18 hours a day in the United Kingdom— and see the magic of less being more.

What is your response if a non-Muslim colleague at work or university asks you about Ramadan and its purpose? Here are some aspects to ponder.

First and foremost, fasting is worship prescribed like a medicine by Allah the Almighty.

O you who have believed, decreed upon you is fasting as it was decreed upon those before you, that you may become righteous. [Quran 2:183]

We are all familiar with regular meetings at the mosque and dear ones frequenting our houses more often in Ramadan, sharing the feasts of samosas and pakoras. This should regularly become a communal activity, given the following hadith:

Salim bin ‘Abdullah bin ‘Umar said: “I heard my father say: ‘I heard ‘Umar bin Khattab say: “The Messenger of Allah (saws) said: ‘Eat together and do not eat separately, for the blessing is in being together.’” [Sunan Ibn Majah, English reference, Vol. 1, Book 29, Hadith 3287]

We all worry about the food running out when people do come over: take reassurance from the following hadith; Allah will put barakah in your efforts (now when has the food actually ever run out? Alhamdulillah!):

The importance of looking after neighbours, both Muslim and non-Muslim, has been stressed by the Prophet (pbuh). Imagine how powerful, heartfelt, and sincere the dawaah will be when sharing iftaar meals with neighbours.

Narrated by  Ibn ‘Abbas told Ibn az-Zubayr (Allah be pleased with him), “I heard the Prophet, may Allah bless him and grant him peace, say, ‘A man is not a believer who fills his stomach while his neighbour is hungry.’ [Al-Adab al-Mufrad Al-Bukhar, IV 61, 112]

When we hear of the suffering of our brothers and sisters who are enduring trials of famine we sometimes remain almost indifferent, as they seem so distant from our own lives.

Fasting fosters unity within the ummah, beyond ethnic boundaries. Now picture this: in the gruelling heat, 2 year old Ayesha whimpers in the cradling arms of her forlorn, weeping mother, her stomach bulging with fluid due to malnutrition, her limbs barely skin and bone. Creating this scene nurtures a greater feeling of empathy and upset, as we are able to reflect upon the impact of a lack of food and water both on the individual as well as the family. A tear may even flow from the eye.

What greater way to imbue a sense of responsibility and unity in this ummah than to actually experience their plight, albeit on a much smaller scale. Alhamdullilah, most of us are spurred on with the blessing of a delectable meal at the end of the day. During the final hours of the fast, reflect upon those who are less fortunate. This may encourage us to support our brothers and sisters regularly in whatever way we can to save them from their perpetual hunger.

The Prophet Muhammad (peace be upon him) said: “Feed the hungry, visit the sick and set free the captives.” [Sahih Al-Bukhari, Volume 7, Hadith 552]

(The righteous are those) who feed the poor, the orphan and the captive for the love of God, saying: ‘We feed you for the sake of God Alone; we seek from you neither reward nor thanks.’ [Quran, 76:8-9]

Let fasting be the cure for excess, extravagance, and selfishness. We all remember having eaten to our hearts and stomachs and chests content: it was just too much! Remember the hadith of the Prophet (may peace and blessings be upon him):

Miqdam bin Ma’dikarib said: “I heard the Messenger of Allah (s.a.w) saying: ‘The human does not fill any container that is worse than his stomach. It is sufficient for the son of Adam to eat what will support his back. If this is not possible, then a third for food, a third for drink, and third for his breath.” [Jami` at-Tirmidhi 2380, Vol. 4, Book 10, Hadith 2380]

In the Quran, we see a dialogue between the occupiers of Heaven and Hell, asking what made the latter enter Hell:

What has brought you to this burning abode? They will answer, ‘We were not amongst those who worshipped God (out of arrogance) and nor did we feed the needy . . .’ [Quran,74:42-44]

Note how feeding the needy is placed in priority right after the prayer.
And again in Surah Al-Ma’oon:

Have you seen the one who denies the [Day of ] Judgement ? Then such is he who repulses the orphan and encourages not the feeding of the needy . . . [Quran 107:1-3]

Abu Huraira reported: The Prophet, peace and blessings be upon him, said, “A prostitute saw a dog lolling around a well on a hot day and hanging his tongue from thirst. She drew some water for it in her shoe, so Allah forgave her. [Sahih Muslim 2245]

So, this Ramadan, make the intention to please Allah, to share the khair, however small you may feel it is, with Muslims and non-Muslims, brothers and sisters, near and far: see how, inshaa Allah, sacrifice transforms into magnificent, exponential returns, both in this life and the everlasting hereafter.

May Allah accept our good deeds and multiply them eternally, delete our mistakes and sins and improve us for the better each day. Ameen!

This article was inspired by Sheikh Alaa Elsayed (may Allah bless him and his family) at the Twins of Faith Conference, London, hosted by Mercy Mission World on 15th June, 2014.