Move On or Turn Back? (The Road to Righteousness) 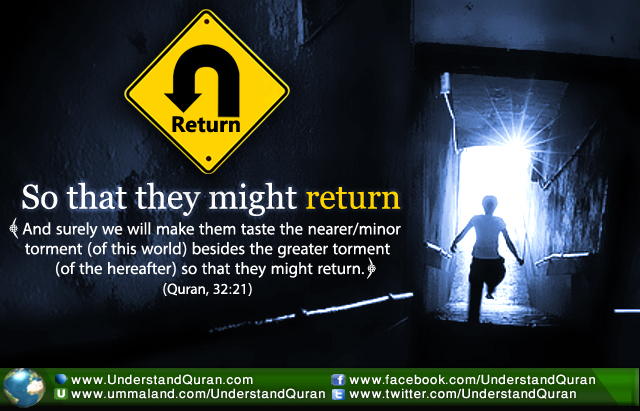 Move On or Turn Back? (The Road to Righteousness)

Whenever I see someone in difficulties or suffering some crises in life, I want to remind them that Allah does not do things haphazardly or without any purpose. All He wants for us is success and more success!

That is why sometimes great troubles are faced by his most beloved people— so that through their patience and perseverance Allah might raise their status in Paradise even more.

But how can we tell whether we are doing our best or not? Maybe on the outside we are good but there are some hidden sins which are only visible to Allah and He knows that if we persist in them then it will eat up all our goodness and deprive us of our place in Paradise.

When a problem comes we should ask forgiveness from Allah for all the sins we know we’ve done and even those we don’t know. And then we should also pray to Him to make us aware of our wrong ways so that we can put them right.

Taubah, or repentance, cannot be complete without correction, and correction can only be done through recognizing our errors.

Our Beloved Prophet (saws) said: The one who continuously asks forgiveness from Allah, then Allah will make a way out for him in all problems and will give him ease in all difficulties and will provide for him sustenance from where he could not even imagine. [Narrated by Abdullah bin Abbas]

To Sin is Inevitable, to Repent Essential

As humans we are prone to mistakes. To sin is inevitable, but Allah loves the sinner who takes account of his deeds and then repents sincerely and takes great care not to repeat his errors. Therefore to sin is not a problem in itself, but it becomes a serious problem when we start making excuses for ourselves and justify going against the wishes of Allah.

For example, two people could not wake up for fajr salah, yet when they did wake up, one of them is filled with guilt and a feeling of loss and tries to wash it away with wudhu and prays the compensatory salah, asking forgiveness from Allah and promising not to miss it ever again. Then he goes about his activities with a greater awareness of Allah, saying astaghfirullah whenever he remembers that he has not prayed on time because his heart is humbled by the realization of his own sin.

But the other person casually gets out of bed and replaces his guilt with excuses like oh I was so tired, I slept so late, my back hurts so much, or how could I get up so soon and then putting aside any further thought of what he has missed. He is taken over immediately by his worldly goals. He gets ready, has breakfast, and goes off to work, not even caring that He has sinned against the same lord who gave him this food and all the other luxuries of his life.

Who do you think will be more beloved in Allah’s eyes? It’s not that the first person will never sin again, but every time he makes a mistake he comes even more close to Allah and does even more good deeds to make up for his loss. How will anyone make up for the loss if they don’t even realize the loss?

Therefore it is by Allah’s extreme compassion and mercy that if the road we have taken in life does not lead us to success then He puts some speed-bump in the way or some other road-block in the form of an illness, financial crises, or other trials so that we slow down and read the huge sign posts warning us to turn back because this way leads to fire and destruction and a never ending torment.

But what happens most of the time? We just try to remove the obstruction so that we can move on with life, not caring about the clear warnings those signs telling us to take a u-turn.

As Allah warns us in the Quran: And surely we will make them taste the nearer/minor torment (of this world) besides the greater torment (of the hereafter) so that they might return. [Quran, 32:21]

May Allah enable us to turn back to the path that leads to success and happiness. Ameen.

Shaheen Nawaz is a housewife and mother of three. She blogs at theseekerspath.com where she wishes to spread the message of Allah to the world. Her writings are also being published by the Islam channel of helium.com, where she writes by the name of Umme Adil.