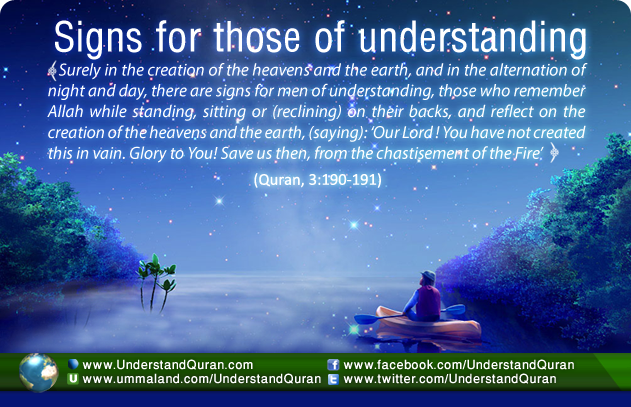 Towards the end of these beautiful verses is a dua. The first thing that struck me when I read the translation of this dua was this: How can anyone think of Hell when he is busy admiring the beauty of Allah’s creation?

I would have been awed and thrilled while looking at the stunning beauty of Allah’s creation— I wouldn’t have even thought about Hell! Hell in contrast to the beauty of this world is such a scary place. But Allah mentions that it is only the people of understanding who would make this dua. So I decided to give this dua some thought.

Some Thoughts on the Connections Between Creation and Hell

The Noble Quran mentions the Thamud people who were shown the miracle of the she-camel. Prophet Salih (peace be upon him) instructed his people that this she-camel was a sign from Allah. They were asked to allow this she-camel to drink from a pond and were told that nobody should interfere with her. But it is reported that the people of Thamud violated this condition and were thus punished by Allah.

Here Allah created an animal and asked people not to exploit her but rather to live their lives along with this creation of Allah, the she-camel. It was created as a test for the people— a test of their obedience to Allah’s commands.

In the face of it, the command to not interfere with the drinking of the she-camel from a pond sounds quite straightforward and simple. But according to some notes mentioned in the tafseers it was prevailing conditions that made the test very tough.

Some people had monopolized natural resources like water and pasture and were thus denying the rights of the poor and needy. The test was to see if the people honored every other person’s (and animals’) rights.

Isn’t this true of our tests in schools or interviews as well? The questions on the test papers or in the interviews themselves are easy; given enough time and some searching tools, we can always find the right answer. But the circumstances, the conditions of time limit, and the fear of uncertainty about the right answer makes the test tough.

When we admire Allah’s creation we realise the number of benefits that Allah has bestowed on us. The free and clean air, water, land, fresh fruits, animals, good health, wealth, relatives, neighbours and time, apart from all the other things that we can think of, is an unending list of gifts.

Once we recognise how many things Allah has given us, it immediately dawns upon us that almost every item on this list comes with some conditions about how, where, and when to use them. This is exactly the same condition that was presented to the people of Thamud.

So I concluded that we need to admire Allah’s creation and realise that it has all been created as a test for us. The moment one hears the word “test” the immediate thought that comes to his mind, is that he should not fail.

We should certainly do our best to excel in this test and pass with highest honours. But the main thing lingering at the backs of our minds should be to “not fail.” What would be the most obvious prayer we would make when we appear for this test? This one: O Allah, save me from failing this test. Save me from The Hell Fire!

The Way Out of the Woods

This test might look like a daunting task and it certainly is. But by Allah’s mercy we have been shown the way to overcome this difficulty as well: You alone do we worship, and You alone do we turn to help [Surah 1:5] Allah reminds us in this ayah that if we remain obedient to Allah, He Himself will provide the help to overcome all difficulties and pass this test. For it is He who creates and manages the circumstance of this very test!

Are You of the People of Understanding?

Now, let us read that dua again, and ask ourselves why we are not making this dua? Allah called the people who made this dua the people of understanding. They understood Allah’s signs. They handled their lives with care, so much that they could actually see the unseen world through the seen world. It is the unseen world that is the truth and more real than the world that we see.

Sarfraaz Ahmed: I am not an aalim (religious scholar). I am a student of The Noble Quran. Here I list down some of my thoughts that came to me while pondering on this beautiful ayah and dua. I wanted to share these thoughts with others.