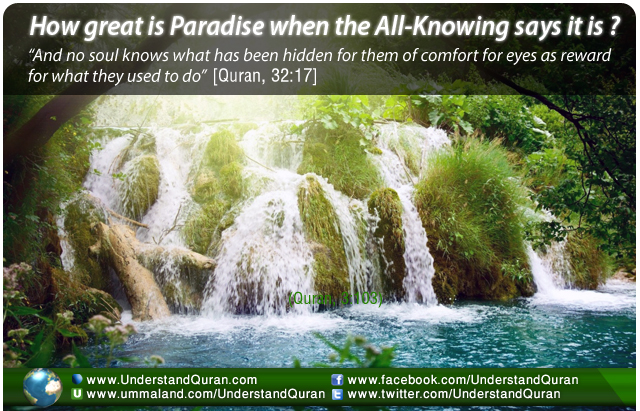 Are you ready to revive your hope to the fullest and face daily life fresh and strong?

Join us in our struggle for Jannah! In this week’s Jumuah Special you’ll discover a selection of seven good deeds and their reward. So get super-motivated to apply them instantly!

The Prophet salallahu ‘alayhi wa sallam said: Allah, The Exalted and Most High said: I have prepared for My pious worshipers such things as no eye has ever seen, no ear has ever heard of, and no mind has ever thought of. All that is reserved, besides what you have seen, is nothing.’ Then he recited: No person knows what is kept hidden for them from the coolness of their eyes as a reward for what they used to do [ Quran 32:17] [Al-Bukharee]

7 deeds and their reward in Jannah

You know about Paradise but sometimes it all feels far away. Just then it is time to remind yourself how real are the rewards awaiting you as a believer in the Gardens of Wonders! Our central ayah is a true hope-giver, mind-tickler, and stress-buster!

A house in Paradise

Deed 1: Give up that argument!

Next time you are in the middle of an argument tell yourself to stop, and remind yourself of how beautiful a house in Jannah must be. What will you gain by winning this argument anyway? You can make your point once and then just say: I respect your view, but I don’t want to argue over it.  Mind though that if the arguing is to show the truth of a matter and refute what is false then you should speak out at least once, but never to just win over or degrade the other.

Deed 2: No lying– even when you are joking.

You know lying is a sin. But sometimes when you are with friends you might make a story juicier than it really is. It’s very easy to slip into exaggerating when you are joking, but next time stop yourself. And teach your children from when they’re young to never add or take away from the truth, even for fun.

Don’t underestimate good manners, from holding open the door for someone, to your way of eating, to being modest. Every day spend some time studying Islamic manners. An excellent example is the book Riyaad Us-Saaliheen and especially the chapter: “The Book of Good Manners.” Then make dua’ to Allah to guide you in acting upon your knowledge!

A date palm in Paradise

The Messenger of Allah salallahu ‘alayhi wa sallam said:  Whoever says: ‘Subhan Allahil-Adheem wa bihamdihi (Glory is to Allah, the Magnificent, and with His Praise)’ a date-palm tree is planted for him in Paradise. [At-Tirmidhee]

Deed 4: Say subhanallahil adheem wa bihamdihi all through your day.
It’s as simple as that!

The Messenger of Allah, sallallahu `alayhi wa sallam, said: Allah will raise the status of His righteous slave in Paradise, and he will say, ‘O my Rabb, how could I deserve this?’ He will say, ‘Because your child sought forgiveness for you.’ [Ahmad]

This is one of the few good deeds that will reach someone in their Hereafter.

The highest dwellings in Paradise

In an amazing hadith Rasulullah salallahu ‘alayhi wa sallam mentions the specific reward for those who strive in the path of Allah: The best of the shuhadaa’ are those who fight in the first rank and do not turn their faces away until they are killed. They will have the pleasure of occupying the highest dwellings in Paradise. Your Rabb will smile at them, and whenever your Rabb smiles upon any of His slaves, that person will not be brought to account [Ahmad]

Deed 6: Support widows and the destitute.

By helping them you can have the status and insha’Allah alike high dwellings in Paradise! The Prophet, sallallahu `alaihi wa sallam, said: The one who helps widows and the destitute is like one who fights in jihad for the sake of Allah. I (the narrator) think he said: “And he is like the one who stands all night in prayer and never sleeps, and like the one who fasts continually and never breaks his fast. [Muslim] So sponsor a widow or find out if there are widows and destitute in your local area and help them with shopping, visiting, housework, etc!

The Prophet salallahu alayhi wa sallam said: The one who was devoted to the Quran will be told on the Day of Resurrection: ‘Recite and ascend (in ranks) as you used to recite when you were in the world. Your rank will be at the last ayah you recite. [Abu Dawud]

Deed 7: Read, understand and memorize the Quran each day of your life.