Reform Your Home (Part I) 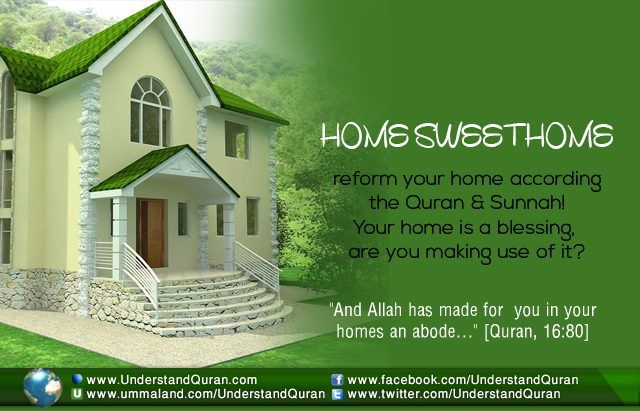 Your home is a blessing. Are you making good use of it? Many of our homes are full of shortcomings and neglect of our deen, so it’s time to take action and ask: how can I fill my home with productivity and emaan?

Let’s learn tips from the Quran and sunnah on how to reform our homes, inshaa’Allah!

3 reasons why you should put your house in order

First let’s get motivated on why the home plays a vital role in this life and especially the next:

1. It is a place to protect yourself and your family from the Hellfire.
There are many motives mentioned in the Quran and ahadeeth why your house is so important for you. Firstly, it is the main place to protect youself and your family from the fire of Hell by making your house a place of worship and encouragement of doing good deeds. Allah says: O you who believe!  Ward off from yourselves and your families a Fire (Hell) whose fuel  is men and stones, over which are (appointed) angels stern (and)  severe, who disobey not, (from executing) the Commands they receive  from Allah, but do that which they are commanded. [Quran, 66:6]

3. It is way to protect yourself and keep your evil away from people.
Uqbah ibn Amir asked the Prophet: How can salvation be achieved?  He replied: Control your tongue, keep to your house, and weep over your sins. [At-Tirmidhi] A reflection point is to connect the controlling of your tongue to keeping to your house; the home is not only a place to protect yourself from the fitan (tribulations) of the outside world, but also a way to keep your own evil away from others!

Tips on how reform your home

Is your house a place where the angels are writing down backbiting, swearing, display between relatives or neighbours who are not mahram and even where music and indecent tv programs are being played? The first step is to make your house a qiblah— a place of prayer!

“Her house” refers to the room in which the woman is and “her courtyard” to the central part of the house to which all the doors are open, like the hallway.  What a blessing that your house gives you the opportunity to fulfil this beautiful advice of the Prophet himself!

Tip: play the adhaan in your house if you live in a place where there is no public adhaan. It will greatly enhance an atmosphere of emaan in your house, help you to pray on time, and have a great effect on the children, inshaa’Allah!

2. Revive the sunan of the house.
Have you noticed how many ways of the Prophet salallahu ‘alayhi wa sallam you can revive in your home? For example, the sunan of eating, drinking, sleeping, purifying yourself, and getting dressed all take place in your house! Now, there are specific sunan that are related directly  to the house. Let’s learn some and revive them, inshaa’Allah:

b) Sunnah of leaving your house.
The Prophet said: If a man goes out of his  house and says: بِسْمِ اللهِ ، تَوَكَّلْـتُ عَلى اللهِ وَلا حَوْلَ وَلا قُـوَّةَ إِلاّ بِالله.
Bismillaahi, tawakkaltu `alaa-llaahi, wa laa hawla wa laa  quwwata illaa billaah – in the name of Allah, I put my trust in Allah, and there is no help and no strength except in Allah-  it will  be said to him: this will take care of you, you are guided, you have  what you need and you are protected. The shaytan will stay away from him, and another shaytan will say to him: what can you do with  a man who is guided, provided for and protected? [Abu  Dawood, At-Tirmidhi]

c) Bless your household by saying salaam.
Saying the salaam when you enter your house is mustahabb (recommended). Anas ibn Malik said: The Messenger of Allah ) said to me: O my son, when you enter upon your family and say salaam, it will be a blessing for you and the members of your household. [At-Tirmidhi, hasan] And Allah ‘azza wa jall says: But when you enter the houses, greet one another with a greeting from Allaah (i.e. say: As-Salaamu ‘Alaykum — peace be on you), blessed and good. [Quran, 24:61]

d) Use the siwaak when you enter your house.
`Aa’ishah said: When the Messenger of Allah entered his house, the first thing  he would do was use siwaak. [Muslim]

e) Recite Surah al-Baqarah in your house.
The Messenger of Allah said: Do not make your houses into graves. The shaytan flees from (and in another variation: does not enter)  a  house in which surah al-Baqarah is recited. [Muslim, Al-Haakim]

f) Recite the last two ayaat of Surah al-Baqarah for three nights.
The Prophet said: Allah wrote a document two thousand years  before He created the heavens and the earth, which is kept near the  Throne, and He revealed two aayaat of it with which He concluded surah al-Baqarah. If they are recited in a house for three  consecutive nights, the shaytan will not approach it. [Ahmad]

To be continued inshaa’Allah!

May Allah ‘azza wa jall enable all of us to apply this knowledge, ameen.