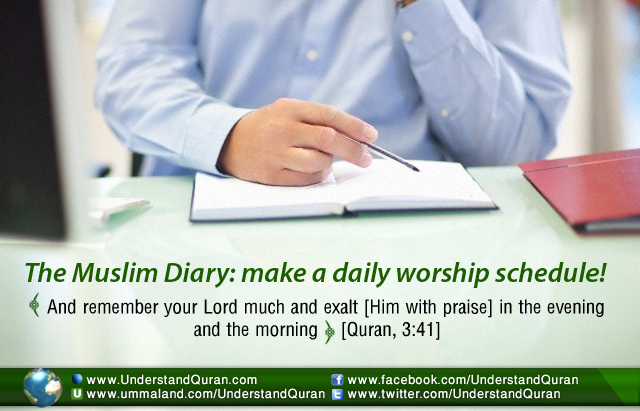 Not for nothing are we human beings called insaan, of which one of the meanings is “forgetful.”
We forget all the time. When we are sad, we forget when we were happy. By the evening we forget what we had for breakfast. And we tend to forget about Allah ‘azza wa jall. That is exactly why believers use various acts of worship each day to remind them about Allah.

In this week’s  central ayah Allah ‘azza wa jall gives you and me a reminder for daily success:
. . . And remember your Lord much and exalt [Him with praise] in the evening and the morning. [Quran, 3:41]

In these times of hastening and “being busy” and “oh, I forgot,” here is a selection of highly recommended acts of worship in addition to the five daily prayers and their sunnah prayers.  At the end you will find a practical schedule you can print and use each day to ensure you get them covered. And remember: do these acts out of deep love for your Lord and not just to “tick them off!”

1.The morning and evening remembrance.
The morning and evening remembrance (or adhkaar, the plural of dhikr) are a set of supplications and ayaat from the Quran that the Prophet salallahu ‘alayhi wa sallam used to read every morning (after the start of the fajr prayer to be completed before sunrise) and evening (after ‘asr, before maghrib).
The rewards? Immense. Examples of the reward of single supplications are a guaranteed entrance to Paradise, protection all day from any harm and forgiveness of thousands of sins. Almost each supplication carries a great reward.
Where can I find them?
In the pocket size supplication book Hisnul Muslim– Fortress of the Muslim under the chapter: “Morning and Evening Remembrance,” or on www.makedua.com.

2. The forgotten prayer:  duha prayer.
What is it?
The Prophet salallahu alayhi wa sallam mentioned about this highly virtuous sunnah (voluntary) prayer: The prayer of the pious should be observed when the young suckling camels feel the heat of the sun. [Ahmad, Muslim, At-Tirmidhee] This prayer is prayed anytime between approx fifteen minutes after sunrise and until approx twenty minutes before the start of the Dhohr prayer. It should be minimum two rakaat and can be eight, twelve rakaat etc, as long as you say the tasleem (the salaam at the end of prayer) after each two rakaat.
The rewards?
The Prophet said: In a human [body] there are 360 joints and man must make a charity for each one.” The people said: “Who can do that, O Messenger of Allah?” He responded: “One may cover the dirt that one finds in the Masjid or remove something harmful from the road. If one could not do that, he could pray two rak’at of Duha and that will be sufficient for him. [Ahmad, Abu Dawood]
And Abu Hurayrah said: My Khalil [friend, meaning the Prophet] advised me to take in consideration three things and I will not leave them until I die: [1] to fast [sawm] three days of every month; [2] to observe the Duh’a-prayer; [3] to observe the witr-prayer before sleeping. [Al-Bukharee, Muslim]

3.The 100x dhikrs
What is it?
The Prophet used to say certain dhikr 100 times each day: for forgiveness, as glorification, as gratefulness, examples are: Astaghfirullah, SubhanAllah,  SubhanAllahi wa bihamdihi and laa ilaaha illAllahu wahdahu laa shareeka lah, lahul mulku wa lahul hamdu wa huwa alaa kulli shay’in qadeer. You don’t have to say them in one go, but can spread saying them throughout the day.
The rewards?
Saying astaghfirullah (I seek Allah’s forgiveness) or astaghfirullah wa atoobu ilayk (I seek Allah’s forgiveness and turn to Him): The Messenger of Allah said: O people repent to Allah, because I repent hundred times a day. [Muslim]

Saying subhanAllahi wa bihamdihi
The Prophet also said: Of those who say hundred times a day: Subhan Allahi wa bi hamdihi [Exalted is Allah and to Him belongs all praise], his misdeeds are erased, even though they are as the foam of the sea. [Al Bukharee, Muslim]

Saying laa ilaaha . . .
The Messenger of Allah  said: He who utters a hundred times in a day these words: `La ilaha illallahu, wahdahu la sharika lahu, lahul-mulku wa lahul-hamdu, wa Huwa `ala kulli sha’in Qadir (there is no true god except Allah. He is One and He has no partner with Him; His is the sovereignty and His is the praise, and He is Omnipotent),’ he will have a reward equivalent to that for emancipating ten slaves, a hundred good deeds will be recorded to his credit, hundred of his sins will be blotted out from his scroll, and he will be safeguarded against the devil on that day till the evening; and no one will exceed him in doing more excellent good deeds except someone who has recited these words more often than him. [Al-Bukhaaree, Muslim]

4. Specific ayaat of the Quran, on specific times of the day.
What is it?
The Prophet used to read certain ayaat and surah’s each day on specific times. Follow this sunnah and gain great rewards inshaa Allah!
The rewards?
The last ten ayaat of Surah Ale Imraan after waking from sleep:
The Messenger of Allah slept until halfway through the night, or just before or after that. The Messenger of Allah (peace and blessings of Allah be upon him) woke up and started wiping the sleep from his face with his hand. Then he recited the last ten verses of Surah Al ‘Imran, then he got up and went to a water skin that was hanging there, and did wudu (ablution) from it and did it well, then he stood and prayed. [Al-Bukharee, Muslim]
Al-Nawawi said: This indicates that it is mustahabb (recommended) to recite these verses when getting up from sleep.

Surah Al Mulk before going to sleep:
The Prophet said: Surah al Mulk is the protector from the torment of the grave [Al-Haakim, An-Nasaa’i] and Jabir radiyallahu ‘anhu said it was the custom of the Prophet not to go to sleep until he had read Tabarakalladhi Biyadihil Mulk and Alif Laam Meem Tanzeel [Surah As-Sajda] [Ahmad, At-Tirmidhee]

Ayat al-Kursi after each obligatory prayer:
The Messenger of Allah said: Whoever recites Ayat Al- Kursi immediately after each prescribed Prayer, there will be nothing standing between him and his entering Paradise except death. [An-Nasa’i,  Ibn Hibban]

Download the Muslim Diary!
By using a daily worship schedule you can show your Lord that you are eager and doing your best to remember Him as effectively as you can. How else can we claim we want to please Him, but we are not even making a daily schedule of worship for ourselves while we write our agenda’s and diaries full of appointments, meetings and worldly things to do?

Print your daily chart of worship here:In A4 sizeIn A3 size To download the Muslim Diary– a pocket guide to daily worship– click here.

Take inspiration from this beautiful poem:

‘My mind ponders and contemplates,
Dwelling on the reality of life,
Yet nothing is as scary as the Realness of the Ever-Living.

His closeness,
His knowledge of my inner self,
The insides tremble and frighten at this reality,

I awake,
Sometimes,
I hear nothing except my heart beating,
Beat after beat it beats,
One thought is flowing in my mind,
All that my mind and body desire at this moment,
Is to stand,
To stand before Him.

This feeling I wouldn’t exchange for the world,
To fall prostrate and praise Him, tell Him I love Him and am longing to meet Him.

Life is a journey with many intended ambitions –
Yet mine is simple…………… to meet my Lord when I am closest to Him.’
[Taken from the Muslim Diary, Al-Ansariyah Publications]
Praying you will benefit,