Miracle Stories: The She-Camel of Allah 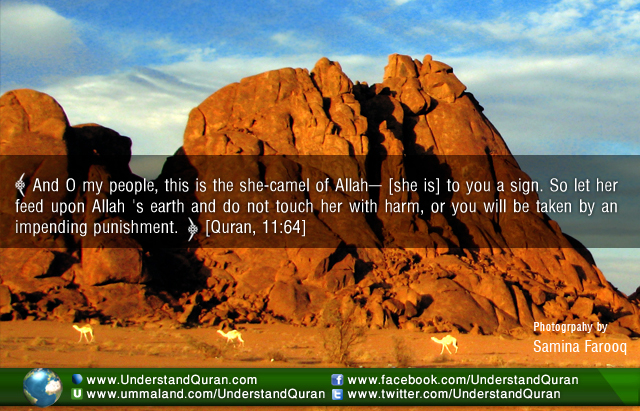 Allah mentions the stories of various Prophets and their nations in the Quran. Some Prophets were just sent with clear speech such as Nuh alayhi salam. Others, like Musa alayhi salam, were sent with various miracles. Among the most interesting of stories in the Quran is a story that is not that well known and not oft-repeated, in spite of the multitude of lessons in it. This is the story of Prophet Saleh alayhi salam, his people— Thamud, and the she-camel of Allah.

The people of Thamud were people who were blessed with strength and intelligence. Buildings they built were carved into the mountains, and they were very oppressive and tyrannical to other people. Moreover, they denied the blessings of Allah upon them and were staunchly involved in their idol worship. Allah, out of His Mercy and Benevolence, sent to them a Messenger from among themselves, the Prophet Saleh alayhi salam. He invited his people to worship Allah alone. He said,

‘My people, worship God. You have no god other than Him. It was He who brought you into being from the earth and made you inhabit it, so ask forgiveness from Him, and turn back to Him: my Lord is near, and ready to answer.’ [1]

He invited his people to Allah, told them of the blessings of Allah in creating them, and reminds them of the mercy of Allah- my Lord is near, and ready to answer. Yet, Thamud make a mockery of him, and question his intelligence!

‘Saleh, We used to have such great hope in you. Will you forbid us to worship what our fathers worshipped? We are in grave doubt about what you are asking us to do.’ [2]

Thamud just wanted to live their lives as they knew it, not willing to go out of their comfort zone. They had comfortable lives doing idol worship, and attributed many of their successes to their idols. Moreover, they thought that Saleh alayhi salam was possessed and mentally disturbed. However, on the ground things were different. Some people were being receptive to the message of the Prophet Saleh alayhi salam and they wanted an end to that. They didn’t want to be challenged by what they saw to be a new religion, and wanted to cut its root off.

One day Saleh alayhi salam called the people on a certain day, and he reminded them of Allah and advised them to be conscious of Allah and to believe in Him. Then the people made a unique challenge to the Prophet Saleh:

“Ask your Lord to make a she camel, which must be 10 months pregnant, tall and attractive, issue from the rock for us.”

Saleh alayhi salam replied: “Look now! If Allah sends you what you have requested, just as you have described, will you believe in that which I have come to you with and have faith in the message I have been sent with?”

Saleh alayhi salam really wanted his people to believe in Allah. He wanted good for them so much that he prayed and prayed to Allah so that Allah sends a female camel, 10 months pregnant from the hills. Then, lo and behold, Allah split the rock asunder, and out came a camel!

The Camel had its rights; so does the Quran.

Scholars mention many of the characteristics of the camel. It produced so much milk that thousands of villagers could be fed. However, it would drink water from the well on one day, and everyone else could drink water from that well on the other day. It came with a lot of barakah but it had its conditions too. Similarly, the Quran is a blessed book, and has given us more than just milk, it has given life to our dead hearts. However, it has its conditions as well. We are to obey what is in the book, we are to give the book and by extension the commands in it, their due rights.

However, Thamud were not impressed. They hated the camel— some simply because they had to accept Allah, some because they didn’t want the people to accept Islam and some people simply because the camel was supposedly “restricting” their lives. Similarly we at times feel that the Quran is “restricting” our lives and not letting us live the life we had wanted. A blessing from Allah comes with a responsibility. The Quran came with a responsibility and if we take it we are rewarded. If we choose not to take it, we are going to be punished. Similarly, Thamud decided to remove this camel from their lives and killed it. And then Allah sent down upon them a severe punishment. This is a warning sign to us, that if we are to get complacent with the Quran, try and remove it from our lives, we are asking for destruction, in this life and also in the hereafter

[3] Ibn Kathir, Stories of the Prophets, Chapter on Prophet Saleh