Mind Your Tongue: How to Tame a Tiger and Make it Work for Good 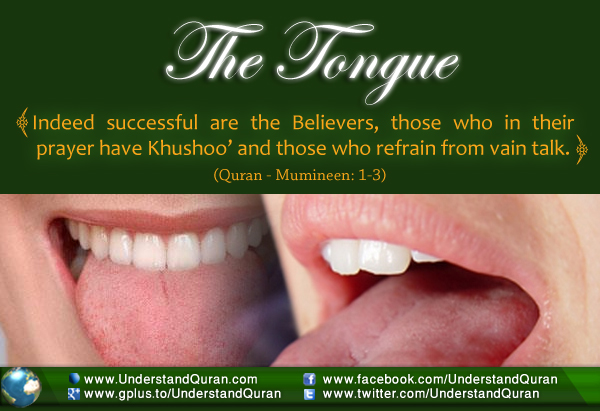 Allah ‘azza wajal made it so easy for your tongue to move— it moves more than your limbs!

If your words are good, you can earn rewards. But you can also utter words that make you lose the reward of your previous good deeds.

Imam al-Ghazali said: The tongue is a great endowment from Allah; though small in size, its crime is enormous.

Let’s learn in this week’s Jumuah Special how to use your tongue in a productive way!

Your tongue can make or break you. That’s why the whole body warns the tongue saying,
Fear Allah concerning us, for we are (dependant) upon you. If you are upright then we will be upright and if you are corrupt then we will be corrupt. [Sunan at-Tirmidhi]

Allah ‘azza wajal reminds you about vain talk in the beginning of Surah al-Mumineen:
Indeed successful are the Believers, those who in their prayer have khushoo’ (devotion, concentration, humility) and those who refrain from vain talk.

What do we learn from this ayah? If you want to be a successful believer and achieve khushoo, avoid vain talk.

There’s another amazing motivator; Allah subhanahu wa ta’alaa says: Not a word is said except that there is a watcher by him ready to record it. [Quran, 50:18] Try to memorize this ayah and remind yourself of it all the time!

On the authority of ‘Uqbah bin ‘Aamir radiyallaahu ‘anhu, who narrated that the Prophet salallaahu ‘alayhi wa sallam was asked, O’ Prophet! What is salvation? How can I be saved? He said, Withhold your tongue, withhold your tongue and let your house confine you and weep over your sins. If you do these three things, that these are means of salvation. [Sunan at-Tirmidhi and Musnad Imam Ahmad]

The tongue is a blessing from Allah ‘azza wajal and a great tool of communication. Animals are unable to speak, we are!
How can you show gratefulness for your tongue? That’s right, by using it in the right way.

Sahl ibn Sa’ad (radiAllahu’ anhu) reported that the Messenger of Allah said, Whoever guards what is between his jaws and legs, I shall guarantee him paradise. [Saheeh al-Bukhari]

Let’s first look at some don’t’s of the tongue so we can recognize them in our lives and break our bad habits. Then we’ll look at how we can use our tongues in the right way insha’Allaah so we can make this tiger work for good!

One of the Greatest Productivity Killers: Backbiting

The Messenger of Allah once asked his Companions, ‘Do you know what is backbiting?’ They said, ‘Allah and His Messenger know best.’ He (sallallahu’alayhi wasallam) said, ‘To mention about your brother that which he hates.’ They said, ‘What if that which we say about our brother is true?’ He (sallallahu’alayhi wasallam) said, ‘If there is in him what you say about him then that is backbiting, and if you say of him that which is not true then you have slandered him.’ [Saheeh al-Muslim]

Allah ‘azza wajal says in the Quran, Do not backbite each other, would any of you wish to eat the flesh of your dead brother, no rather you hate it! [Surah Hujarat:12]

Four Tips on How to Overcome the Evil Habit of Backbiting

1. Remember the punishment of Allah and reflect on the ayaat of the Quran that talk about bad speech.
2. Fear that your own faults might be revealed. The Prophet said, O you who believe with your tongues, yet eeman has not entered your hearts. Do not backbite the Muslims, nor follow their faults. For he who follows others faults then Allah will declare (disclose) his faults and he whom Allah reveals his faults, then Allah disgraces him in his own house. [Sunan Abu Dawood]
3. Know that you give your rewards to someone else if you backbite them. A man came to al-Hasan al-Basri (rahimahullaah) and said that he had heard that al-Hasan al-Basri had backbitten him. Upon this he (rahimahullaah) said, Who are you that I may give you my rewards? It is also said; if I would backbite, I would backbite my parents, because they deserve my rewards the most!
4. The most important thing is that there is a great reward in staying away from backbiting. The Prophet said, Whoever protects the honor of his brother in his absence, Allah will protect his face from the Fire on the Day of Judgment. [Sunan at-Tirmidhi]

Don’t’s of the Tongue

How Silence is Golden

To conclude, we can do either of two things with our speech to become successful: 1). use it to encourage to good, or 2). keep silent.

Your speech can be khayr (good), sharr (evil), or laghw (vain). Next to good speech, silence can be a great productivity booster too! Silence can be ‘ibadah; it’s an adornment without jewels and a fortress without walls.  It frees us from having to apologise to anyone, the al-Kiraam al-Kaatibeen (recording angels) having nothing to record when we are silent, and our faults are concealed.

Three Ways You Can Control Your Tongue

2. Surround yourself with good company and remind yourself and others to good speech.
It takes two to gossip. Research and learn the punishment for bad speech. Imagine how the punishment in the grave would feel. If the angel of death were to take your soul in would you want bad words to be your last?

3. Use the money jar. The idea is to keep a jar in your house in which you put a certain amount of money whenever you use bad language, for example each time you swear or gossip. The amount you put in should be big enough to make you feel regret and remember how much this bad language will cost you in the Hereafter! You can give the money to charity.

Do’s of the Tongue:

It’s not difficult to break the habit of foul language. Replace it with dhikr. Whenever you can, begin to replace your swear words with Alhamdulillah, or Subhanallah or other words of remembrance. This way you get the reward of remembering Allaah (swt) and you cleanse your heart and tongue of foul language, because Allaah (swt) hates foul speech!

Finally, please make dua’ with me that we will be of these people: Indeed, Allah will admit those who believe and do righteous deeds to gardens beneath which rivers flow. They will be adorned therein with bracelets of gold and pearl, and their garments therein will be silk.  And they had been guided [in worldly life] to good speech, and they were guided to the path of the Praiseworthy. [Quran, 22:23-24]