The Importance of Being Truthful 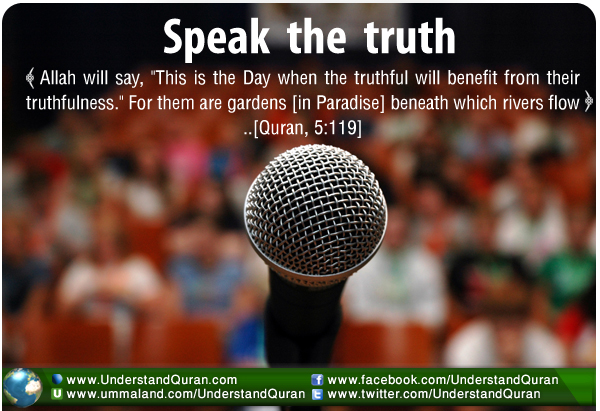 Guess what? There are no white lies in Islam! This is one of the beautiful traits of Allah’s guidelines.

As-sidq (truthfulness) is a command of Allah ‘azza wajal; it’s an essential part of faith, a must-have quality for all the prophets (peace be upon them), and is mentioned in 100 places in the Quran!

In this week’s Jumuah Special you’ll discover how to go from lying to truthfulness insha’Allah.

In this week’s central ayah Allah ‘azza wajal tells you about the sweet reward awaiting you just for being truthful: Allah will say, “This is the Day when the truthful will benefit from their truthfulness.” For them are gardens [in Paradise] beneath which rivers flow . . . [Quran, 5:119]

Why do we lie?

Some people actually enjoy cheating and deceiving others.  Looking at those reasons, they can all be eliminated by thinking about the hereafter. A lie will never protect you on the Day of Judgment. It will never bring you what you want in the hereafter, and if you have deceived people it can lead to terrible punishment in the grave or even the hellfire. Lying is one of the most-counterproductive habits ever!

8 ways to keep it real

1. Realise that lying is bad for you.Each day you’re faced with the same choice hundreds of times: whether to lie or to speak the truth. It often happens without thinking and you might ignore the impact of these small decisions, but even the smallest of lies can break up relationships and forever impact your hereafter.

Lying is literally bad for you. Consider the polygraph machine— known as the lie detector. It doesn’t actually detect lies, specifically, but rather it detects the signs of stress you show while telling a lie. And we all know that stress affects your body, so lying is bad for both your body and brain!

Now look at this beautiful advice the Prophet salallahu ‘alayhi wa sallam gave you: Leave that which makes you doubt for that which does not make you doubt, for truthfulness is certainty and tranquility, whilst lying is doubt and confusion. [At-Tirmidhee, al-Nisaa’i, Ahmad]

2.  Train yourself with a no-excuse policy. If someone lies to you even once, don’t you find it difficult to trust that person afterwards? Beware of lying, even if it’s just once. Speaking the truth is a habit you need to train yourself in; you need to keep correcting yourself.

The Prophet salallahu ‘alayhi wa sallam said: You must be truthful, for truthfulness leads to righteousness and righteousness leads to Paradise. A man will keep speaking the truth and striving to speak the truth until he will be recorded with Allah as a siddeeq (speaker of the truth). Beware of telling lies, for lying leads to immorality and immorality leads to Hellfire. A man will keep telling lies and striving to tell lies until he is recorded with Allaah as a liar. [Muslim]

Ziyad, who was a governor of Iraq, said in a speech: The lies of a person will eventually become well-known. If you find out that I lied even once then you are free to disobey me; and If you hear that have I told a lie then be certain that I must have told other lies. Ali ibn Abi Talib radiyallahu anhu said: The truth teller achieves three things: (other’s) trust, love, and respect.

4. Beware of lying to children.
Come here and I will give you a sweet! (even though you don’t have one). The danger-zone for many of us is what we tell our children to make them listen!

Abdullah Ibn ‘Aamir radiyallahu ‘anhu narrated that: Once, when I was a child, Rasulullah was at our home. I was outside playing and my mother called out: ‘O ‘Abdullaah, come here and I will give you something’ the Messenger of Allah asked: “What do you wish to give him?” she replied: ‘Dates’ Rasulullah  said: “If you hadn’t have intended to give him anything, then it would have been recorded against you that you lied.”

The Prophet said: Lying is improper whether in earnest or in jest, even if any one of you promises his child something and does not fulfill his promise. [Al-Bukhaaree, Abu Dawud]

5. Practice what you preach.
How truthful are you if you know the punishment of gossiping, yet you backbite when you’re with your friends? This should make you ever more aware that the more knowledge you gain, the more careful you should be in whatever you might do or say.

6. Fight hypocrisy non-stop.
The salaf (predecessors) used to fear nifaaq (hypocrisy) in themselves non-stop. What about you? Rasulullah salallahu ‘alayhi wa sallam said: the signs of a hypocrite are three: When he speaks he lies, when he promises he is unfaithful, and when he is entrusted he betrays. [Al-Bukhaaree, Muslim] Constantly test yourself on these three signs and may Allah protect us from them!

7.  The truth is your way out.
Did you know being truthful is a way out of all your problems, even though you would think lying is sometimes easier to get out of a situation? Allah ‘azza wajal says: O you who believe! Be afraid of Allah, and be with those who are true (in word and deeds) [Quran, 9:119] This means: be truthful and adhere to truthfulness, and you will be among its people and will be saved from calamity, and this will make a way out for you from your problems. [Ibn Kathir]

8. I’m not lying— I’m only joking. Not!
The Prophet did joke, but he never said anything except the truth.  So the next time you want to make your jokes funnier or your story juicier, think about the punishment of lying and the reward of telling the truth. Is it worth it?

HOMEWORK: Be real for a house in the middle of Jannah.

Finally, next time you are about to lie, even if you are joking, think about this guarantee and ask yourself if it’s really worth it. The Prophet salallahu ‘alayhi wa sallam said: I guarantee a house in the middle of Paradise for the one who leaves off lying even if it be in jest. [At-Tirmidhee]

I leave you with a beautiful proverb that really stuck with me: Love truth even if it harms you, and hate lies even if they serve you.

May Allah ‘azza wajal make us of the siddiqeen, ameen!

*To learn more about the Beautiful Name of Allah Al-Haqq, read this article.