Don’t Be Afraid— to Fear Allah! 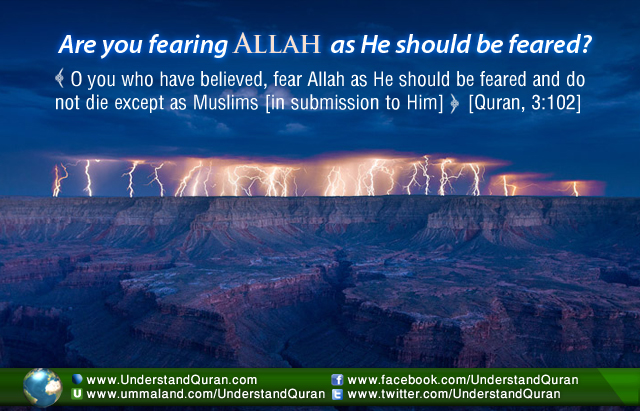 Do you actually fear disappointing the One you so dearly love? Have you in some way gone past the stage of fearing Him from your heart?

Let’s explore why fearing Allah ‘azza wa jall in a balanced way is crucial for your eternal success.

In this week’s central ayah Allah the Majestic gives you a weighty instruction in order to succeed in life: O you who have believed, fear Allah as He should be feared and do not die except as Muslims [in submission to Him] [Quran, 3:102]

Imagine that you die before taking even one moment to turn to Allah ‘azza wa jall and seek His forgiveness for all the times you wronged others and yourself. Your heart is losing its softness, not living up to your repentance— death is overtaking you while you are indulging in your desires. Are these actually part of the things you fear?

Fear of Allah ‘azza wa jall is a beautiful, blessed, and unique type of fear, as it makes you flee to the One you fear, as He says: So flee to Allah. Verily, I (Muhammad) am a plain warner to you from Him [Quran,51:50] This beautiful ayah combines the meaning of both  the fear and hope you should have:  fear of Allah and turning to Him, for there is no refuge from Him except in Him. No one offers refuge from Him except Him; doesn’t this show you He is more Merciful than anyone else?

Words for Fear in the Quran

There are more than ten words for fear mentioned in the Quran, the most common being khawf (خَوف). Khawf is the type of fear you feel when you actually see the upcoming danger and in turn you are afraid of what is coming. For example when there is a severe weather warning, you see the signs and should prepare. So see the signs Allah ‘azza wa jall laid out for you in this life and prepare for the next!

Khashiyah (اَلْخَشِيَه) means you fear the direct harm of something, like fear of a dog or snake, fearing they bite you. Allah ‘azza wa jall constantly warns you in the Quran about things and people before you did wrong and their punishments, so you can choose not to go down that road and it can add to your khashiyah of the dangers of certain deeds.

Khushoo (اَلْخُشُوْع) is normally mentioned related to prayer and feeling humility and having concentration in prayer, but it also has an aspect of fear build in it. The type of fear you feel in your heart and then affects your limbs and your muscles. Keep making dua’ that the speech of Allah reaches your heart and even causes an effect on your body.

Taqwa (تقوى) means that you protect yourself, or take precaution out of a certain fear or concern. An example is when you lock up your house as a precaution measure for burglars. And this is exactly how you should be as a believer, active and alert at all times in this world and take precaution by your actions and deeds in order to protect yourself from bad consequences in this life and the next.

7 Ways to Increase Your Fear of Allah
1. Don’t forget yourself.
Sometimes you are so worried about and focused on others, you forget about yourself and you no longer have fears for yourself. You lose the connection with yourself and find yourself not getting emotional when you hear the Quran or when you make dua’. Reconnect with yourself, look in the mirror and recognize your weaknesses in your relationship with Allah ‘azza wa jall.

3. Realize that fear is a blessing.
Allah ‘azza wa jall says: But for he who has feared the position of his Lord are two gardens. So which of the favors of your Lord would you deny?  [Quran, 55:46-47] If you feel fear for standing in front of Him and mind your actions, this genuine fear actually qualifies you for Paradise; your fear is a blessing in disguise!

4. Reflect on the fear of the creation.
Did you know the Day of Judgement will be on a Friday? The Prophet salallahu ‘alayhi wa  sallam said:  There is no angel, sky, earth, wind, mountain, or river that does not fear Friday [ Ibn Maajah] With knowledge of this narration, remind yourself of the Day of Judgement on Friday– and every other day— and let it motivate you to fill your days with good deeds.

5. Be inspired by the fear of Jibreel.

Jibreel ‘alayhi wa sallam came to the Prophet salallahu ‘alayhi wa sallam and was crying. So the Prophet asked him, ‘What makes you cry?’ He said, “My eyes have not been dry since Allah created Jahannam, out of fear that I would disobey Him and He would throw me in it. [al-Bayhaqee] Have you ever cried just thinking about the Hellfire?

6. Think of the fear of the Companions.

Think of the amazing deeds they did, yet they felt so much fear. Whenever you do a deed, have both hope that Allah ‘azza wa jall will record it for you as fear it might not be accepted so you remain motivated to keep doing good deeds and aim higher and higher!

7.  Advise yourself and others.
Make it a habit to talk to yourself and tell yourself out loud: Fear Allah! Also gently advise others out of love for them and their success in this life and the next byreminding them to fear Allah ‘azza wa jall, saying: اتقواالله‎, fear or be aware of Allah.

May Allah ‘azza wa jall adorn us with genuine, balanced fear of Him and assist us in acting upon the fear in this life, so we can be safe in the next, ameen!