Death, Resurrection, and Signs in Nature 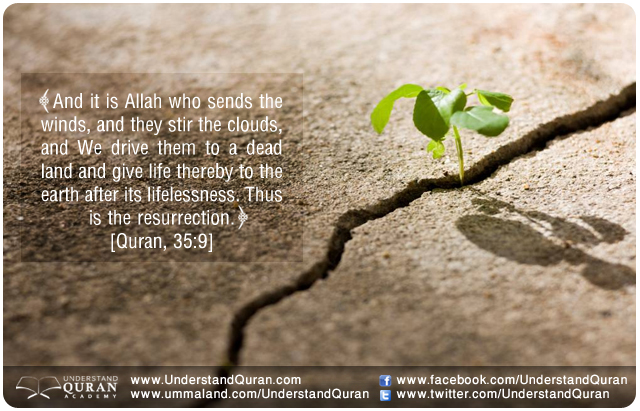 Don’t let the title deceive you; this is not going to be a somber reflection on the reality of death, at least not exclusively so. That topic has been written on exhaustively, although awareness of death is really something we can never have too much of.

If there is one fundamental truth about the human condition, it’s the inevitability of death. Death is one of those things that chuck reflective people headlong into an unrelenting existential crisis (and thus philosophy is made). It’s no surprise, then, that the Quran’s allusions to death come off as emotionally subduing.

That’s certainly part of the story, but there’s more to it than that. There’s an aspect of Quranic descriptions of death that is often missed. Take the following verse, for example:

Indeed, in the creation of the heavens and earth, and the alternation of the night and the day, and the [great] ships which sail through the sea with that which benefits people, and what Allah has sent down from the heavens of rain, giving life thereby to the earth after its death and dispersing therein every [kind of] moving creature, and [His] directing of the winds and the clouds controlled between the heaven and the earth are signs for a people who use reason. [Quran, 2:164]

Signs of the Beneficial Order Strewn Across Reality

The verse is one of the “signs“ passages of the Quran, wherein it points to the beneficial order strewn across reality and makes an implicit case for the great artificer and provider. The verse is supposed to appeal to our human intuitions, and in that sense it’s inviting, upbeat even. And yet, note how naturally the mention of death occurs.

It’s as if according to this verse, death, in some of its forms at least, is an altogether relatable feature of the world. The ominous, somber aura associated with death is momentarily stripped away, and it’s located smack-dab among the ubiquitous signs of our Lord. For a moment, death seems inevitable and yet almost quite garden-variety. It’s this naturalness of death the Quran alludes to that I want to focus on.

Of course, death is still demarcated from the other signs of God in nature by an important consideration. One of the key themes of the Quran is postmortem resurrection. As a part of this discussion, the Quran relegates a good few passages to its ostensibly counterintuitive nature; the idea of being brought back to life after death to have your deeds accounted for seems very far removed from our everyday experiences. The Quran’s contemporaneous opponents expressed their incredulity thus:

The Quran swoops in to allay this puzzlement via several a fortiori arguments, such as: didn’t Allah create you out of absolutely nothing? If so, then what is stopping you from believing in creation out of something, namely dust and bones?

And it is Allah who sends the winds, and they stir the clouds, and We drive them to a dead land and give life thereby to the earth after its death. Thus (will be) the resurrection. [Quran, 35:9]

The parallel between the fundamental reality of death in our lives on the one hand and the phenomena readily observable in nature on the other, is something I find fascinating. It’s as if Allah has constructed the cosmos in such a way that analogues of death and resurrection— albeit human concerns— are located throughout.

In other words, inevitable and grave the reality of the death and resurrection may be, nature tells us that it’s not entirely “other.” In a way, death is a necessary process that both the animate and inanimate realms must go through in order to achieve felicity (except, of course, those who abuse their own free will). The following rather poetic verse in the Quran seems to attest to this:

And you see the earth barren, but when We send down upon it rain, it quivers and swells and grows [something] of every beautiful kind. [Quran, 22:5]

The Phenomenon of Metamorphosis

This association isn’t found only in growth of vegetation. A rather striking parallel is the phenomenon of metamorphosis— the process whereby the humble caterpillar becomes a gorgeous butterfly. Without delving too much into the icky entomological details, the life of a caterpillar is characterized by constant feeding. Quite literally, its sole purpose is to chew on leaves and grow in size.

Once it reaches a certain body weight, it spins a silk cocoon around itself and rests. During this rest period, most of the caterpillar tissues are disintegrated. Via a subsequent little-understood process, the mangled bits of the now-history caterpillar come together to give rise to the beautiful Monarch or the majestic Swallowtail.

The process has been (accurately, to my mind) compared to an old T-4 vehicle which, in the course of a road trip, takes a pit stop and builds a garage around it. Inside the garage, most of the car is crushed into a misshapen heap of steel, rubber and glass. After a while (not too long), the garage doors open, and a red-and-black-streaked helicopter whirrs out. It’s hardly surprising that the Aztecs took the butterfly to symbolize life and death.

There are so many other examples of “natural” deaths and resurrections. Some occur under the microscope, like the programmed and genetically regulated cell death used to control embryogenesis and immunology. Some others are historical, like the proliferation of mammal life-forms on earth, made possible only after the extinction of dinosaurs. Without the now open ecological niches, mammalian mass emergence could hardly have been possible. This is why pre-Darwinian naturalists believed that extinction is God’s way of “setting the stage” for new waves of creation.

A Profound Spiritual Message— the Plausibility of Resurrection

The Quran utilizes this fact for didactic purposes. A profound spiritual message— the plausibility of resurrection— is piggy-backed onto the ubiquity of death and subsequent resurrection. Thus, what may appear to be a uniquely human concern is inscribed on the fabric of the cosmos for all to see, spelling out the inevitable reality that humans are so wont to deny.

May Allah grant us a deeper insight into His signs— not only the signs in His speech, but also those found in His handiwork.