What You Can Learn From the Conversations of the Hereafter! 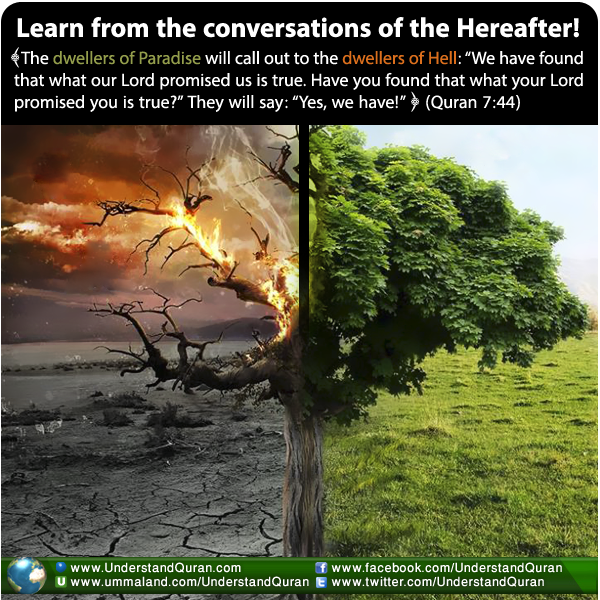 Imagine two people talking to each other on the other side of the room. They’re talking about how to reach this successful station and what not to do. Imagine you have the chance to join them; wouldn’t you pay attention to each word they’re saying, take notes, and use this information for yourself?

In this week’s Jumuah Special you’ll have the chance to reflect on some of the conversations of both the people of Paradise and the people of Hell-fire and take their findings back to your life to learn from, insha’Allah!

Hell-fire and Paradise are already there; they were created before the rest of creation and Allah ‘azza wajal created inhabitants for each of them. Allah subhanahu wa ta’ala didn’t just describe Hell-fire and Paradise— He also decided to enrich us in the Quran with the details of many dialogues, conversations, and discussions of its inhabitants.

These are the dialogues you will be part of yourself one day. So ask yourself: What can I learn now from the conversations of the people of the Hereafter?

6 lessons to learn from the conversations of the hereafter

Those who were patient in hard times, patient in avoiding what Allah has forbidden, patient in following His commands, and patient with others, will taste the fruit of their patience. Patience takes work, so work patience in this world to hear these words in Jannah:

And those who kept their duty to their Lord will be led to Paradise in groups, till, when they reach it, and its gates will be opened and its keepers will say: Salamun ‘alaykum! You have done well, so enter here to abide therein. [Quran, 39:73]

Lesson 2: Be grateful for guidance.

Feel a deep sense of gratitude for the fact that Allah Al-Haadi  has guided you, and thank Him every day for His hidaayah (guidance)!

If you are of ahlul-Jannah, the people of Paradise, you will then say in total ecstasy: All the praises and thanks be to Allah, Who has guided us to this, and never could we have found guidance, were it not that Allah had guided us!  [Quran, 7:43]

On the complete opposite side, fear and horror will take over you.  After some time the people of Hellfire begin to lose hope.

Lesson 3: Call upon your Lord while you still can.

Call upon Allah ‘azza wajal now you still can, call upon Him for every matter, situation or hardship you are in and ask Him to protect you from the Fire.

And those in the Fire will say to the keepers (angels) of Hell: “Call upon your Lord to lighten for us the torment for a day!” They will say: “Did there not come to you, your Messengers with (clear) evidence (and signs)?” They will say: “Yes.” They will reply: “Then call (as you like)!” [Quran, 40:49-50]

Lesson 4: Pray, feed the poor, mind your speech, and remember The Day of Judgement.

When you read the dialogues of ahlul-Jannah and ahlun-Naar, you can learn from their mistakes now by listening to their words! When the people of Jannah ask the people of Hell, why did you enter the fire? The first thing they will say is, we didn’t pray. Do you see the importance of prayer?

Apart from your connection to Allah in prayer, mind your connection with the ummah and make it your duty to look after the poor and needy. Actively look out for those who need help (or guidance) and give your wealth and time to helping out those in need local and further away.

Doing these, always strive to keep your conversations with others pure from evil habits like backbiting, swearing, or simple talk about useless matters.  Finally, always remind yourself of the Day of Judgment to keep all your actions in check, and, most importantly, repent when you go wrong.

[Who will be] in gardens, questioning each other, About the criminals, [And asking them],  “What put you into Saqar?”  They will say, We were not of those who prayed, Nor did we used to feed the poor. And we used to enter into vain discourse with those who engaged [in it], And we used to deny the Day of Recompense. Until there came to us the certainty. [Quran, 74:40-47]

Realize all the blessings Allah is giving you right now, even one glass of water. Increase in saying alhamdulillah!

The dwellers of Hell will call out to the dwellers of Paradise: “Throw down some water to us, or some of what Allah has provided you with.” They will say: “Allah has forbidden them to the disbelievers.” [Quran, 7: 50]

How easy is it to follow the media, singers, actors, and fashion instead of sticking to the ways of the prophet salallahu ‘alayhi wa sallam? When you feel tempted by your environment, learn from this moment of extreme regret when the people of Hell realize that those whom they followed in the world are not able to help them in their pain and deep suffering!

. . . and has prepared for them a flaming Fire (Hell). Wherein they will abide forever, and they will find neither a protector, nor a helper. On the Day when their faces will be turned over in the Fire, they will say: “Oh, would that we had obeyed Allah and obeyed the Messenger.”  [Quran, 33:64-66]

May Allah Ar-Rahmaan make you and me of the people of Paradise, ameen!