Al-Kawther: A River of Goodness Through This Life and the Next 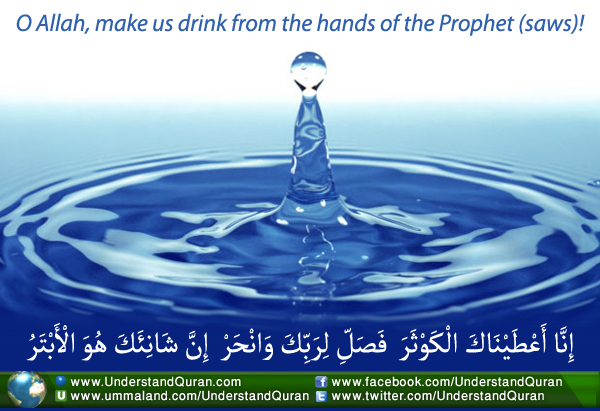 In today’s Jumuah Special you’ll learn how to be productive through the surah that made the prophet (salallahu alayhi wa salam) smile!

Anas (radiyallahu ‘anhu) said, The Holy Prophet was among us. In the meantime he dozed; then he raised his head, smiling, and said, “A chapter was revealed to me earlier.” Then he read, “Indeed, We have granted you al-Kawthar. So, pray to your Lord and sacrifice. Indeed, the one who insults you, he is cut off… [Saheeh Muslim]

Surah al-Kawthar is the shortest surah of the Quran and many of us have memorized it, but do we truly feel it when we recite it? What does this surah have to do with us? It was the powerful emaan booster given by Allah (‘azza wajal) to His prophet and the community in a very difficult time, so let’s find out how we can use it to boost our faith and make us more productive!

A Heart-melting Scene in the Hereafter

Imagine for a moment that you’re on the plains of al-Hashr, the gathering on the Day of Judgment. Anxiety is all around you, but you don’t care— you’re having emotions you’ve never felt before.

Think back to the the last time you fasted on a long, hot day. Forget food— you just wanted one glass of water right? This day, the sun is low and people will be sweating like never before.

Imagine a beautiful, exclusive lake of abundant good on the Day of Judgment, covered with vessels like stars in the sky for all the believers to drink from at a time when you will be craving for a drink. The lake will provide a drink sweeter than honey and whiter than milk, sweet enough to satisfy your taste buds forever.

Rasulullah (salallahu ‘alayhi wa sallam) said about al-Kawthar: It is a pond where my Ummah will be brought to on the Day of Judgement. Its vessels are as numerous as the stars in the sky.[Saheeh Muslim]

And he said: I entered Paradise and I came to a river whose banks had tents made of pearls. So I thrust my hand into its flowing water and found that it was the strongest (smell) of musk. So I asked, “O Jibril! What is this” He replied, “This is Al-Kawthar which Allah, the Mighty and Majestic has given you.” [Imam Ahmad]

What a lofty goal to strive for! How can you be of those who drink of the prophet’s hands and get his intercession? Start living by Surah Al-Kawthar, a river of goodness through this life and the next!

1.      Change your way of thinking: be thankful. One of the most infamous productivity-killers is ingratitude. Ingratitude makes you feel depressed, angry, and worried. You constantly think about what you don’t have. You get angry looking at what others have. In this very first ayah Allah ‘azza wajal does not mention the hardship the Prophet salallahu ‘alayhi wa sallam was going through, including the death of his son and the opposition of the pagans. Rather Allah reminds the prophet in the toughest of times of what He had given to him:  abundant good in this life and the next.  Next time a trial hits you, shift your way of thinking from focusing on the trial and what you lost to what Allah has given you.

2.      Benefit from the prophet. Ibn `Abbas said about the meaning of al-Kawthar: It is the good which Allah gave to him (the Prophet)… The river which is in Paradise is part of the goodness which Allah gave him.’ [Al-Bukharee] Allah ‘azza wajal has given you a chance to benefit from the Prophet in many ways. He has made you his follower and given you the Quran through him. His character teaches us how to build your character. The abundance given to him can flow like a river through your life, if you only take his example. Thank Allah for your guidance, strive to understand the Quran, and work on your character. If you want to be close to him on the Day of Judgment, each day send lots of prayers for the Prophet salallahu alayhi wa sallam, who said:  The closest of people to me on the Day of Resurrection will be those who send the most blessings on me [At-Tirmidhee]. Imagine all those times you say: salallahu ‘alayhi wa sallam!

Ayah 2: So pray (fasalli) to your Lord (li Rabbika) and sacrifice (wanhar)

3.      Treat your salah as your life-saver. Know and act upon this in life and you will succeed insha’Allah: salah is the first act of ‘ibadah you will be asked about on the Day of Judgment. If it is good, the rest is good. What has caused you to enter Hell? They will say: We were not of those who used to offer their Salat (prayers).  [Quran, 74:42-43]

4. Make sacrifice a part of your day. Thank Allah by actions and not only by words. Sacrifice an hour of time or part of your salary to help someone in need or sacrifice your skills to help out at a charity fundraiser. The problem is that many of us don’t feel the need to make sacrifices. We pray, but when it comes to sacrificing time or wealth we do it occasionally. The secret of a successful Muslim is that you make sacrificing a part of each and every day.

5.      Dealing with ridicule. The leaders of the Quraysh were ridiculing the prophet salallahu ‘alayhi wa sallam, saying he was abtar, cut off from all future hope and spreading his message because his sons died. Being ridiculed can either make you or break you. From this surah you learn that the good in the Hereafter is exclusively for those who believe and do good. When you are mocked because of your hijaab or your beard, let this surah remind you not to become weak in faith!

6.      Don’t take pride in children. Your possessions and popularity don’t determine that you are good. “Good” means you have a heart that is thankful to Allah. Raise your children as your legacy, never take pride in them as it is Allah to whom we all belong.

7.      Always believe in the promise of Allah and live by it. Who could ever think these powerful Quraysh leaders would be destroyed? What became now of Abu Lahab, Abu Jahl, and the like? At the battle of Badr the Prophet stood above their bodies and said: Have you found true what your Lord promised you?” Somebody said to him, “You are addressing dead people.” He replied, “You do not hear better than they but they cannot reply.” [Saheeh al-Bukharee] The name of Muhammad is being called out by millions worldwide in the adhaan, the shahada, the prayer. So who is really abtar – cut off? Whatever happens, know that the promise of Allah is true— all you need to do is stick to your deen. Leave a legacy. Set up a charity project, help others learn the Quran, and leave the rest to Allah ‘azza wajal.

8.       Say bismillah. The prophet salallahu ‘alayhi wa sallam said: Every action that does not begin with Allah’s remembrance is cut off  (severed). [An-Nasa’i] “Cut off,”, according to the scholars, means “cut off from blessings.” So increase in saying bismillah!

THE AYAH JOURNAL, Qur’an & Productivity is a global project with the exciting goal to inspire every Muslim worldwide to open the Qur’an every day, pick one ayah, and apply it to our own lives by making acting on the ayah your mission for the day. Let’s bring back the message of the Qur’an to our daily lives! Check www.ayahjournal.com and follow us on www.facebook.com/ayahjournal for vibrant Qur’an and productivity tips.