7 Things to Do to Increase Your Tawfeeq 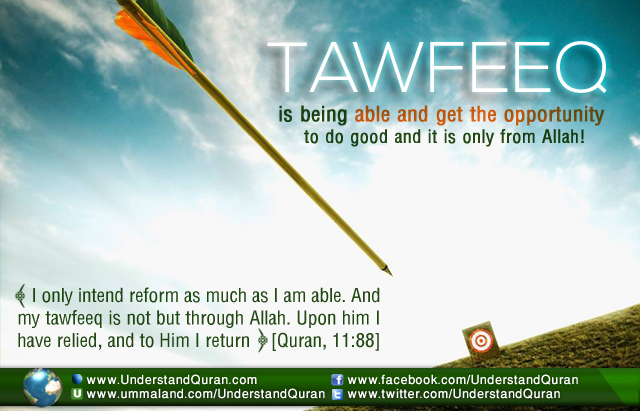 In this week’s central ayah Allah ‘azza wa jall describes the words of the prophet Shu’ayb ‘alayhi sallam: He said, O my people, have you considered: if I am upon clear evidence from my Lord and He has provided me with a good provision from Him . . . ? And I do not intend to differ from you in that which I have forbidden you; I only intend reform as much as I am able. And my tawfeeq is not but through Allah. Upon him I have relied, and to Him I return. [Quran, 11:88]

What is tawfeeq? And how does it come to you? Let’s learn about the meaning of tawfeeq and how to apply this ayah in your life in shaa Allah!

Tawfeeq comes from the root waaw-faa-qaaf, which means to agree or reconcile. Tawfeeq is both the ability and the opportunity to do something and this happens when all the means come together so you can do the good you want, and this is only from Allah ‘azza wa jall.

The best type of guidance

The best thing that can happen to you is Allah ‘azza wa jall guiding you to what truly benefits you in this life, and the next and the best of guidance (or hidaayah) is when the Lord of the Worlds grants you tawfeeq.  The one given tawfeeq is called muwaffaq.  The ayah, And my tawfeeq is not but through Allah [Quran, 11:88], refers to attaining goodness andt ruth and being correct in one’s affairs.
But how many don’t recognize tawfeeq? When Allah gives you tawfeeq your affairs are gathered together and you are able to achieve your goals, however it is extremely important you take the first step. In order for Allah to choose you for this specific form of guidance, you need to actively seek tawfeeq from Him in all your affairs, big or small, in this world or the Hereafter.

1. Have a sincere intention.
When your intention becomes sincere and when you wish for that which is good and correct, then Allah ‘azza wa jall will grant you tawfeeq. That is why the scholars mentioned sincerity to be from the biggest of causes of tawfeeq.  Like Shu’ayb said: I only intend reform as much as I am able. And my tawfeeq is not but through Allah [Quran, 11:88] So truly wish for the truth and for yourself to attain goodness and correctness in your affairs and keep reminding yourself about the importance of a sincere intention in all you do for Allah ‘azza wa jall!

2. Be absolutely certain; trust and turn to Allah.
Another cause for being granted tawfeeq is to have yaqeen (certainty) that this tawfeeq can only come from Allah and,  very importantly, to rely on Him and turn to Him in repentance. How many times do people attribute success in their career or having done good deeds to themselves, without even thinking it was only by the tawfeeq of Allah? So have true belief that tawfeeq only comes from Allah,  put your trust in Him and repent: . . . Upon him I have relied, and to Him I return [Quran, 11:88]

3. Desire Paradise and ask for it.
The Prophet sallallahu `alayhi wa sallam said: Whoever makes the Hereafter his preoccupation, then Allah places freedom from want in his heart, gathers his affairs, and dunya (worldly life) comes to him despite being reluctant to do so. And whoever makes dunya his preoccupation, then Allah places his poverty in front of his eyes, make his affairs scattered, and nothing of the dunya comes to him except that which has been decreed for him  [At-Tirmidhee]

Allah gives tawfeeq for the slave when he asks for Paradise, so ask for it!
A bedouin came to the Messenger of Allah whilst he was travelling and he took hold of his camel’s halter or reigns and said: O Messenger of Allah! Tell me of something that will draw me closer to Paradise and distance me away from the Hellfire. He said, the Prophet  turned and looked to his companions and said: Indeed he has been granted tawfeeq. Indeed he has been granted tawfeeq.  Then he said: What did you say? So he (the bedouin) repeated and the Prophet  said: That you should worship Allah and associate none with Him, that you establish prayers, pay the zakah and join ties (kindred). Let go of the camel. [Muslim] Note the bedouin’s will to attain Paradise as an example of tawfeeq. So daily ask Allah for Paradise!

4. Pray the istakhaarah prayer.
Praying this sunnah prayer when proceeding with decisions in your life means you seek tawfeeq. Praying this beautiful prayer with the dua for istakhaarah included in it is a cause for being granted tawfeeq!

5. Ask for a good end.
Realize the importance of being granted tawfeeq in the last moments of your life. The Prophet sallallahu `alayhi wa sallam said: If Allah wishes good for a slave, he utilises him.  It was said: How does he utilise him O Messenger of Allah? He said: He grants him tawfeeq to perform righteous deeds before death [At-Tirmidhee] May we be of those who are utilized by Allah, ameen!

6. Reflect on your friendships. The Salaf used to say: If a person of the sunnah is granted tawfeeq, then the biggest blessing that Allah bestows on him is to give him tawfeeq in finding (another) companion of the sunnah who takes him by the hand and leads him to the truth.
A beautiful example is Khaythamah ibn Abi Sabra who said: I came to Madinah and I asked Allah to facilitate for me in finding a righteous companion, so He facilitated for me Abu Hurayrah. I sat with him and said: Indeed I asked Allah to facilitate for me righteous companionship so I was granted tawfeeq. He said to me: Where are you from? . . . (until the end of the narration) [At-Tirmidhee]
This is how those who were true to Allah in their intentions were granted tawfeeq in meeting those from the sahaaba. So ask Allah for tawfeeq in friendships!

7. Be grateful whenever you are given tawfeeq.
Whenever Allah ‘azza wa jall enabled you to carry out that good deed you wanted to do, thank Him and realize with heart and soul that you were chosen to be granted tawfeeq. And whoever is grateful, Allah will give him more. So be grateful for any tawfeeq and He will give you more in shaa Allah!

O Allah, make us always ask for tawfeeq, recognize tawfeeq is from You only and trust in You. Grant us tawfeeq in all that is good, utilize us on Your path and distance us from the Fire and all deeds that lead to it, ameen!