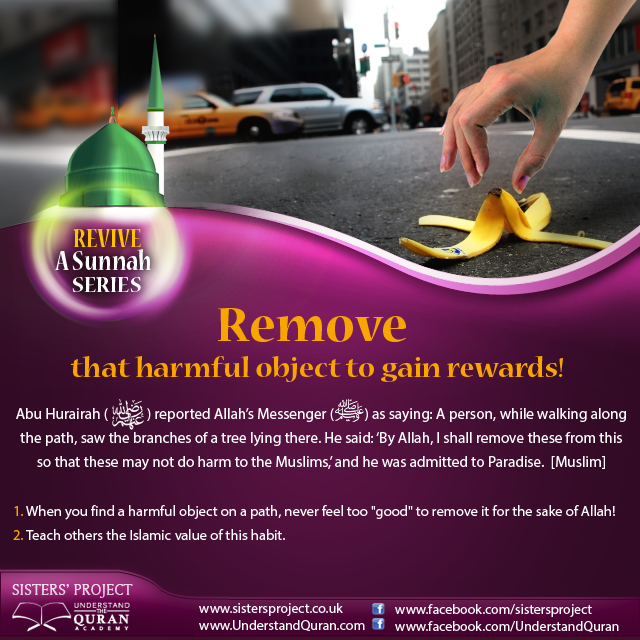 You’re walking along and see a piece of rubbish in the middle of the street.

You around it without giving it a second thought.

You just walked past an opportunity to gain Paradise!

Why? Because removing a harmful object from a path carries amazing rewards!

Narrated by Abu Hurayrah (radiyallahu ‘anhu), Allah’s Messenger (salallahu ‘alayhi wa sallam) said: ‘While a man was going on a way, he saw a thorny branch and removed it from the way and Allah became pleased by his action and forgave him for that.’ Then, the Prophet  said, ‘Five are martyrs: One who dies of plague, one who dies of an abdominal disease, one who dies of drowning, one who is buried alive (and) dies, and one who is killed in Allah’s cause.’ [Al-Bukhari; the Book of the Adhaan]

Abu Hurayrah reported Allah’s Messenger (salallahu ‘alayhi wa sallam) as saying:  While a person was going along the path, he found a thorny branch upon it. He pushed it to a side and Allah approved (this action) of his and (as a mark of appreciation) granted him pardon. [Muslim;The Book of Righteousness, Manners and Joining the Ties of Kinship]

Abu Hurayrah reported Allah’s Messenger as saying that he saw a person enjoying himself in Paradise because of the tree that he cut from the path which was a source of inconvenience to the people.   [Muslim]

The Prophet (salallahu ‘alayhi wa sallam) also said:
A person, while walking along the path, saw the branches of a tree lying there. He said: ‘By Allah, I shall remove these from this so that these may not do harm to the Muslims,’ and he was admitted to Paradise.  [Muslim]

You know that saying ‘laa ilaaha illAllah’ is a way to show your belief, but do you know that removing something harmful from the path even is one of the branches of emaan?

The Prophet (salallahu ‘alayhi wa sallam) said: Eeman has sixty or seventy-odd branches. The least of them is to remove something harmful from the road, and the most lofty of them is the saying: ‘Laa ilaaha illAllah’. And modesty is a branch of eeman. [Muslim]

This also indicates as explained by shaykh Al-Fawzaan in his explanation of Al Usool uth-Thalaathah that placing that which is harmful upon the path is  forbidden because the path is for those who wish to walk upon it, and harmful matters impede those who want to proceed or put them in danger. Such as stopping his car upon the road; this is from harm. And letting water flow out from the house onto the path; this is from harm. And putting rubbish on the path; this is from harm. The adhaa (harmful matter) is anything which causes harm to the people, whether it be thorns or rocks or filthy things or refuse.

Finally, look at this beautiful Prophet’s advice:
Abu Barza reported: I said: Allah’s Messenger, teach me something so that I may derive benefit from it. He said: Remove the troublesome thing from the paths of the Muslims. [Muslim]