Gain in the Rain 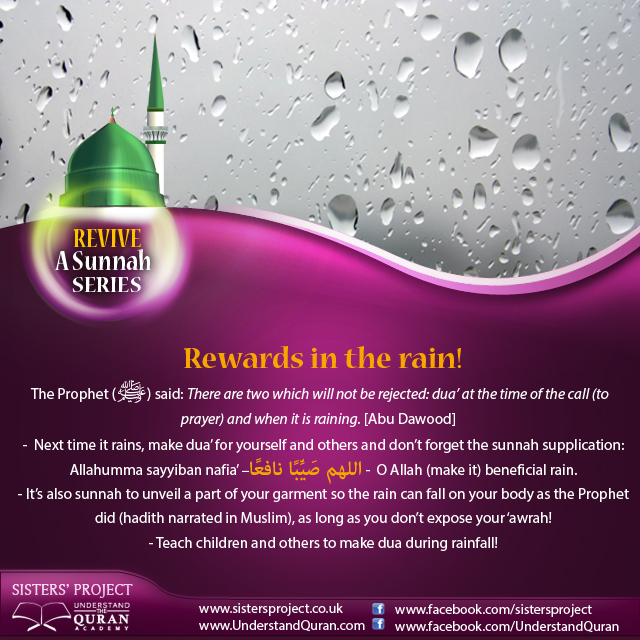 What do you do when it rains? Look for an umbrella? Complain? Seek cover?

It’s time to learn about the rewards of supplicating in the rain! Here are three sunan to revive:

1.       Ask for benefits.  It is narrated on the authority of Aisha (radiyAllahu anha) that when the Messenger of Allah (salallahu ‘alayhi wasallam) saw rain he would say: Allahumma sayyiban naafi’an – O Allah (make it) a beneficial rain cloud.  [Al Bukhari 1032]

2         Turn complaints into dua.  Never complain again when it rains; instead, supplicate!

As it said in the hadeeth of Sahl ibn Sa’d that is attributed to the Prophet (peace and blessings of Allaah be upon him): There are two which will not be rejected: du’aa’ at the time of the call (to prayer) and when it is raining. [Narrated by Abu Dawood and classed as saheeh by al-Albaani in Saheeh al-Jaami’ (3078)]

The next time it rains, make as many dua’ as possible for yourself, your family, and the ummah, as this is a time in which your supplications will not be rejected, inshaa’Allah!

Involve children in making dua when it rains as part of their tarbiyyah (eduction).

And: . . . When the rain came down from the heavens he (The Prophet May peace be upon him) used to remove his garment from his back until the rain fell on it (his back) [Haakim in Al-Mustadrak]

Imam an Nawawi explained that the rainfall is a mercy which Allah has just created, therefore use it as a blessing.