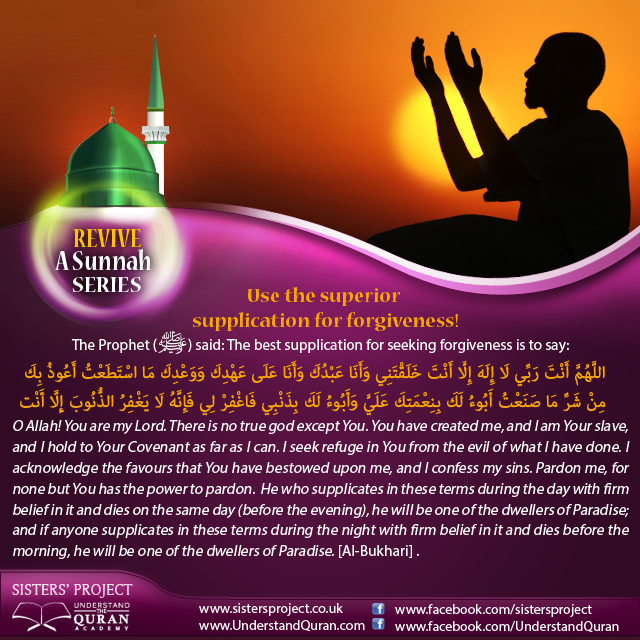 Think about all the things that cause you distress, anxiety, and worries. Could there be something that might relieve you of it all? If so, what an incredible value it would have!

The Prophet (peace and blessings be upon him) said: If anyone constantly seeks pardon (from Allah), Allah will appoint for him a way out of every distress and a relief from every anxiety, and will provide sustenance for him from where he expects not. [Abu Dawud]

There is a way out, and it’s called istighfaar— seeking forgiveness of Allah, the Most High. The power of istighfaar is beyond comprehension, and of all sunnah supplications the following has been mentioned by the Messenger of Allah as the “master of supplications for forgiveness.”

Shaddad bin Aus (may Allah be pleased with him) said that the Prophet (‫ﷺ‬) said: The best supplication for seeking forgiveness (syed-ul-istighfar) is to say:    ‫اللَّهُمَّ أَنْتَ رَبِّي لَا إِلَهَ إِلَّا أَنْتَ خَلَقْتَنِي وَأَنَا عَبْدُكَ وَأَنَا عَلَى عَهْدِكَ وَوَعْدِكَ مَا اسْتَطَعْتُ أَعُوذُ بِكَ مِنْ شَرِّ مَا صَنَعْتُ أَبُوءُ لَكَ بِنِعْمَتِكَ عَلَيَّ وَأَبُوءُ لَكَ بِذَنْبِي فَاغْفِرْ لِي فَإِنَّهُ لَا يَغْفِرُ الذُّنُوبَ إِلَّا أَنْتَ‬ – [Allahumma anta Rabbee, laa ilaaha illaa anta, khalaqtanee wa ana ‘abduka, wa ana ‘alaa ‘ahdika wa wa’dika mastata’tu, a’udhu bika min sharri maa sana’tu, abu’u laka bini’matika ‘alayya, wa abu’u bidhanbi faghfir lee, fa innahu laa yaghfirudh-dhunuba illaa anta] – O Allah! You are my Lord. There is no true god except You. You have created me, and I am Your slave, and I hold to Your Covenant as far as I can. I seek refuge in You from the evil of what I have done. I acknowledge the favours that You have bestowed upon me, and I confess my sins. Pardon me, for none but You has the power to pardon. He who supplicates in these terms during the day with firm belief in it and dies on the same day (before the evening), he will be one of the dwellers of Jannah; and if anyone supplicates in these terms during the night with firm belief in it and dies before the morning, he will be one of the dwellers of Jannah. [Al-Bukhari]

Reflection on the meaning of this supplication starts with an acknowledgement of your relationship with Allah, the Glorified. You realize that you’re always in the blessings of Allah and should not just praise Him, but also be in a state of praise.

The next step is to acknowledge your sins, shortcomings, and mistakes. After this humble realization, you show that you turn to Him only, realizing that only Allah can forgive you, and even further, that He can pardon you, leaving no trace of your sins in your book of deeds!  This supplication shows you that as a servant of Allah you should always be in a state of thankfulness as well as in a state of seeking forgiveness.