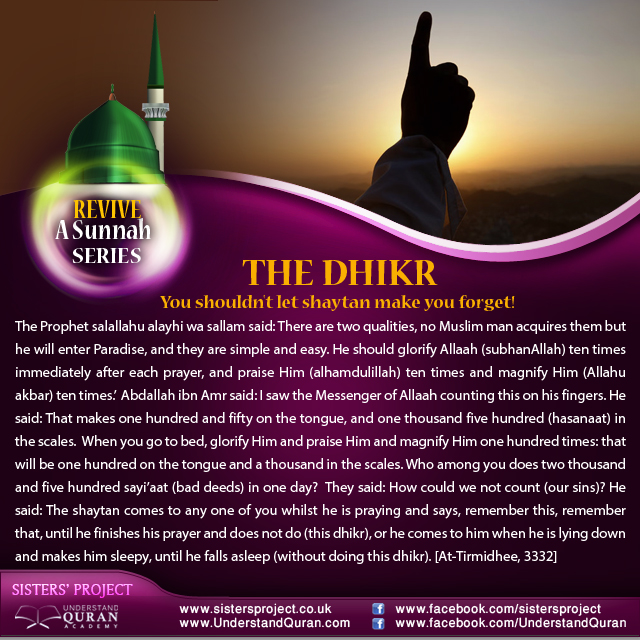 The Messenger of Allah (salallahu alayhi wa sallam) said: There are two qualities, no Muslim man acquires them but he will enter Paradise, and they are simple and easy. He should glorify Allaah (say Subhaan Allah) ten times immediately after each prayer, and praise Him (say Al-hamdu Lillah) ten times and magnify Him (say Allahu akbar) ten times.

Abdallah ibn Amr said: I saw the Messenger of Allah counting this on his fingers.

He said: That makes one hundred and fifty on the tongue, and one thousand five hundred (hasanaat) in the scales. [Translator’s note: each of three phrases repeated ten times makes thirty; multiplied by the number of daily prayers, which is five, makes one hundred and fifty. Each of these good deeds of the tongue will be rewarded with ten hasanaat, which will be added to the total of good deeds to be weighed in the balance or scales on the Day of Judgement].
When you go to bed, glorify Him and praise Him and magnify Him one hundred times: that will be one hundred on the tongue and a thousand in the scales. Who among you does two thousand and five hundred sayi’aat (bad deeds) in one day?’

They said: ‘How could we not count (our sins)?’

He said: ‘The shaytan comes to any one of you whilst he is praying and says, remember this, remember that, until he finishes his prayer and does not do (this dhikr), or he comes to him when he is lying down and makes him sleepy, until he falls asleep (without doing this dhikr). [At-Tirmidhee, 3332]

1. Revive this sunnah and use the dhikr: 10x SubhanAllah, 10x alhamdulillah, 10x Allahu akbar after salah! (Most of us know only of the 33x of each of them and then once: laa ilaaha illAllah wahdahu laa shareeka lah, lahul mulku wa lahul hamdu wa huwa ‘alaa kulli shayin qadeer.)

2. Count them on your right hand to revive a sunnah!

4. Use notes where you pray and to not forget in the bedroom, and beat the shaytan! These supplications are very simple, but we are not consistent like the Prophet warned us.