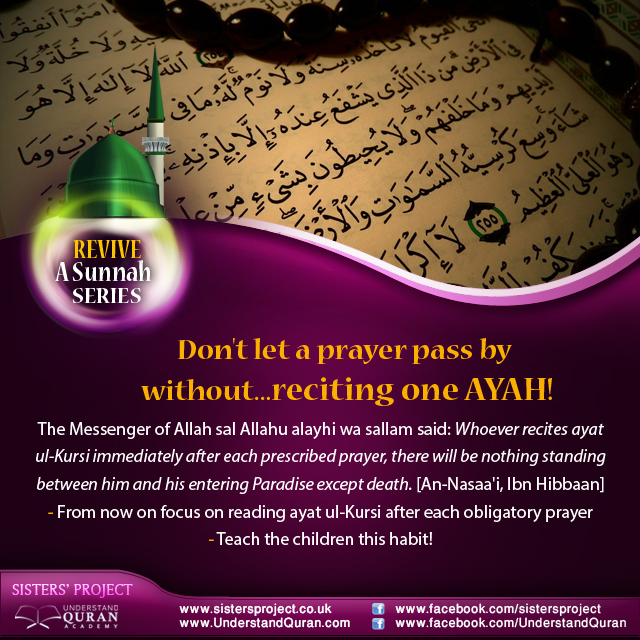 A guarantee to Paradise, inshaa’Allah!

You might know that you should read Ayat Ul-Kursi [Quran, 2:255] after each fardh prayer to gain this immense victory, but do you actually do it? From now, focus on reading Ayat Ul-Kursi after each obligatory prayer!

The Virtues of Ayat Ul-Kursi

Imam Ahmad recorded that `Ubayy bin Ka`b said that the Prophet asked him about the greatest ayah in the Book of Allah, and `Ubayy answered, ‘Allah and His Messenger know better.’ When the Prophet repeated his question several times, `Ubayy said, ‘Ayat Al-Kursi.’ The Prophet commented,

(Congratulations for having knowledge, O Abu Al-Mundhir! By He in Whose Hand is my soul! This Ayah has a tongue and two lips with which she praises the King (Allah) next to the leg of the Throne.) This Hadith was also collected by Muslim, but he did not include the part that starts with, ‘By He in Whose Hand . . . ‘ [Tafseer ibn Katheer]