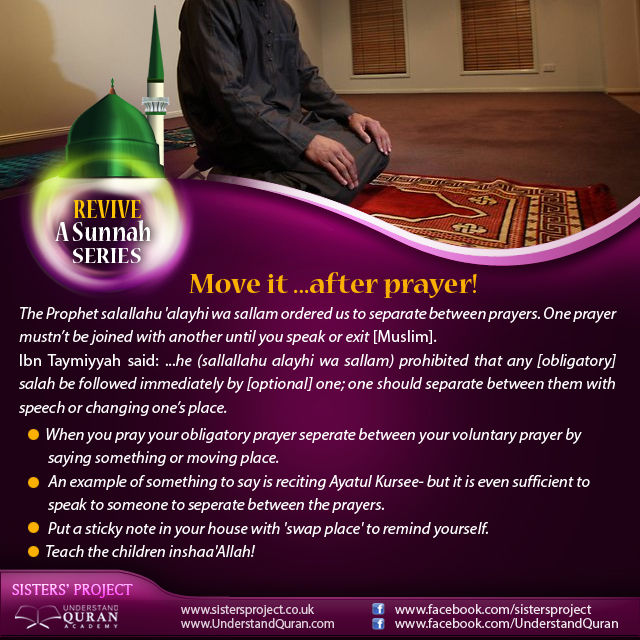 Do you know that when you see people getting up after an obligatory prayer to pray their sunnah prayer in a different spot, they are actually reviving a sunnah?

The Prophet salallahu ‘alayhi wa sallam ordered us to separate between prayers. One prayer mustn’t be joined with another until you speak or exit. [Muslim]

According to the scholars this refers to the seperation between your fardh and sunnah prayers by either speech, an action or movement.

Ibn Taymiyyah raheemahullah said: . . . he (sallallahu alayhi wa sallam) prohibited that any [obligatory] salah be followed immediately by [optional] one; one should separate between them with speech or changing one’s place.

So next time you finish a prayer, move it! Or separate between your obligatory and sunnah prayers by reciting dhikr (like Ayatul Kursee) or even speaking to someone.

You can put a sticky note with “swap place” in the room in which you normally pray until it is a habit; besides, every place where you make sujood will witness for you on the Day of Judgement!

Don’t forget to teach others and the children, inshaa’Allah.