REVIVE A SUNNAH: Supplications from Paradise— and Hell! 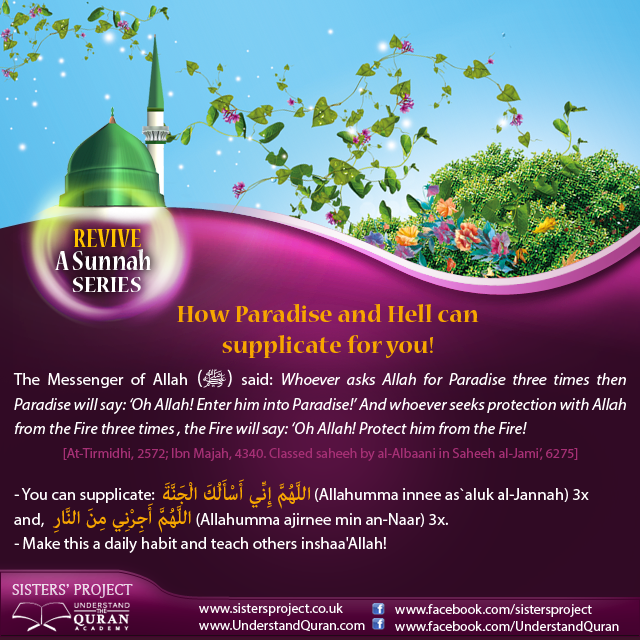 Stop for a moment and think about Paradise, its vast fields, sweet rivers, palaces, foods, and drinks. How would you feel being there in the company of those you love most— enjoying pleasures you never knew before— forever?

Now visualize the Hellfire with its heat, screaming, torture, horrific foods, and boiling drinks. Can you imagine the heart-breaking despair?

Paradise and Hellfire are a reality, and each one of us will meet our destiny in one or the other.

Imagine Paradise and Hellfire could speak and even make dua’ to the Most High. Do you know there’s an amazingly simple deed you can say wherever you are, without any effort, which will take you ten seconds and will make Paradise and Hell supplicate for you?

The Messenger of Allah (صلى الله عليه وسلم) said: Whoever asks Allah for Paradise three times then Paradise will say: ‘Oh Allah! Enter him into Paradise!’ And whoever seeks protection with Allah from the Fire three times , the Fire will say: ‘Oh Allah! Protect him from the Fire! [At-Tirmidhi, 2572; Ibn Majah, 4340. Classed saheeh by al-Albaani in Saheeh al-Jami’, 6275]

Shaykh Al-Hafith Al-Mubarkfuri (may Allah have mercy on him) mentioned about this hadith:
Whoever asks Allah for Jannah . . . This can be said with the following words: “Oh Allah, I ask you for Jannah” or “Oh Allah, let me enter Jannah.” For example: اللَّهُمَّ إِنِّي أَسْأَلُكَ الْجَنَّةَ (Allahumma innee as’aluka al jannah) or  اللَّهُمَّ أَدْخِلْنِي الْجَنَّةَ (Allahumma adkhilnee-l-jannah).

Shaykh Al-Hafith Al-Mubarkfuri went on to specify that we say this . . . three times.  This means he repeats that request at one time. Saying it three times is an earnest request. This etiquette of supplication is authentically reported in the sunnah.

Allah has the ability to make things that don’t normally speak or are non-living talk. Oh Allah enter him into Jannah . . . (Allow him to enter with those in the beginning or with those later.)

Whoever seeks protection . . . (This refers to the person who seeks guard or protection from the Fire) . . . from Hell . . .(This can be said with the following words: “Oh Allah, protect me from Hell.” For example:  اللَّهُمَّ أَجِرْنِي مِنَ النَّارِ —Allahumma ajirnee min an Naar.)

Jahannam says . . .(this means that Hell says, “Save him and rescue him”) . . . from the Fire. (These words refer to Hell asking Allah to allow the slave to be saved from entering the Fire or residing inside it forever.) [Taken from: Tuhfatul Ahwathee bi Sharhee Jami’ At-Tirmithi]

If we truly understood the reality of Paradise and Hellfire, we would make these supplications multiple times a day!