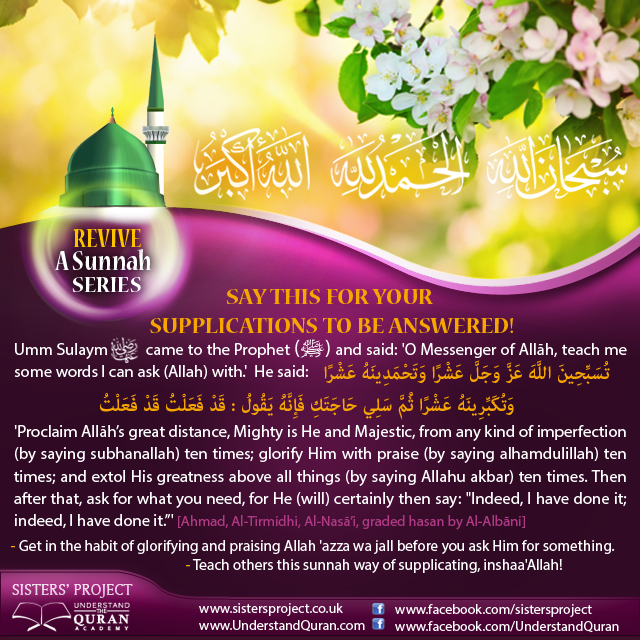 Imagine going to a friend’s house to ask to borrow money. Would you, as soon as the door is opened, say: Assalamu alaykum, can you lend me money please? Or would you first enquire how they were doing, if it were a good time for them, and then explain the reason for your request?

When it comes to asking Allah ‘azza wa jall, why do we so often dive into what we want without praising Him first? Doesn’t He deserve the most beautifully presented requests?

From Anas ibn Malik (may Allah be pleased with him), (who) said: Umm Sulaym came to the Prophet ﷺ and said: ‘O Messenger of Allāh, teach me some words I can ask (Allah) with.’  He said: ‘Proclaim Allāh’s great distance, Mighty is He and Majestic, from any kind of imperfection (by saying subhanallah) ten times; glorify Him with praise (by saying alhamdulillah) ten times; and extol His greatness above all things (by saying Allahu akbar) ten times. Then after that, ask for what you need, for He (will) certainly then say: “Indeed, I have done it; indeed, I have done it.”’ [Ahmad, Al-Tirmidhi, Al-Nasā’i, graded hasan by Al-Albāni]

When you glorify and praise Allah ‘azza wa jall before you ask Him for your needs, you gain:
1. The rewards of reviving a sunnah
2. The rewards of saying subhanallah, alhamdulillah and Allahu akbar
2. Your supplication being answered, inshaa’Allah!