It’s Sunnah— Cover Your Mouth When You Sneeze! 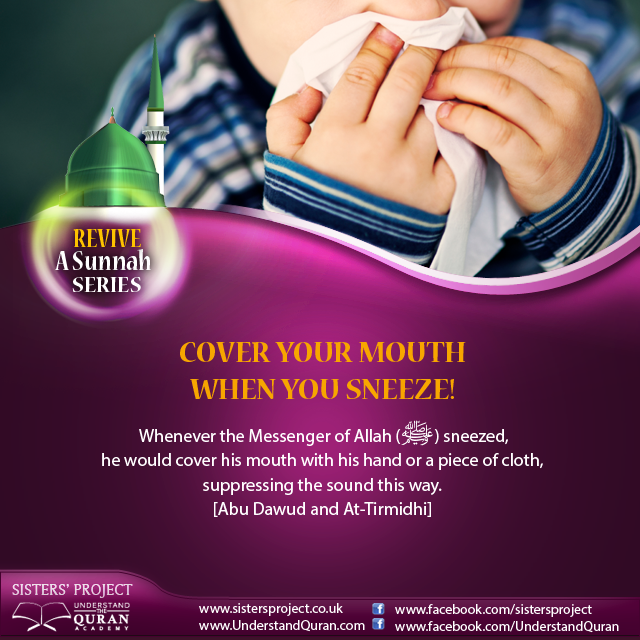 Do you know that Allah azza wa jall likes sneezing but dislikes yawning? As a Muslim you can even gain rewards by sneezing!

It was narrated from Saeed from his father, that Abu Hurairah radiyallahu ‘anhu said: Allah’s Messenger salallahu ‘alayhi wa sallam said, ‘Allah likes sneezing, and He dislikes yawning, so if one of you yawns, let him suppress it as much as he can, and not make any noise, for that comes from Shaitan who is laughing at him.’ [Hadith No. 5028, Book of Etiquette, Sunan Abu Dawud, Vol. 5]

The natural act of sneezing is a mercy and grace of Allah. It relieves us from discomfort, and we should thank Allah ‘azza wa jall for it. When you say ”alhamdulillah” when you sneeze, you’re reviving a sunnah!

Narrated Abu Hurairah radiyallahu ‘anhu: Allah’s Messenger salallahu ‘alayhi wa sallam said: ‘If anyone of you sneezes, he (she) should say ”Alhumdulillah” (Praise be to Allah) and his brother or his companion (i.e. one who is with him/her) should say ‘’Yarhamuk Allah’’ (May Allah have mercy on you). When the latter says ‘’Yarhamuk Allah,” the former should say ‘’Yahdikumullah, wa yuslihu balakum’’ (May Allah guide you and set your affairs straight).’   [Hadith No. 6224, Book of Al-Adab, Sahih Bukhari, Vol. 8]

There’s another sunnah to revive while sneezing; it’s covering your mouth as the prophet did.
Whenever the Messenger of Allah salallahu ‘alayhi wa sallam sneezed, he would cover his mouth with his hand or a piece of cloth, suppressing the sound this way. [Abu Dawud and At-Tirmidhi]