Pause After Each Ayah in Surah Al-Fatihah! 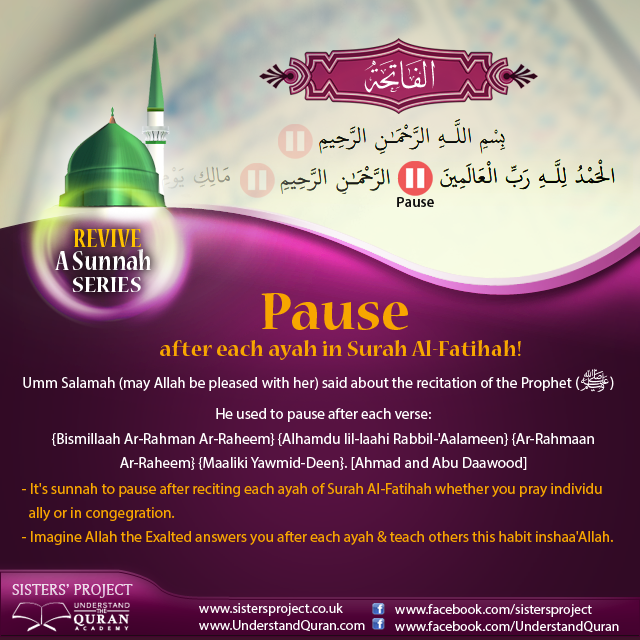 Surah Al-Fatihah is a dialogue between the abd (slave) and his Lord; it’s a conversation between you and Allah the Most High. There is a beautiful, thoughtful sunnah to revive to value this beautiful interaction!

It is recommended for the one who prays to pause after each ayah when reciting Surah Al-Fatihah whether he or she is praying indivudally or in congegration, because it’s a sunnah act.

When Umm Salamah (may Allah be pleased with her) was asked about the recitation of the Messenger of Allah (peace and blessings be upon him), she said: He used to pause after each verse: {Bismillaah Ar-Rahman Ar-Raheem} {Alhamdu lil-laahi Rabbil-‘Aalameen} {Ar-Rahmaan Ar-Raheem} {Maaliki Yawmid-Deen}.” [Ahmad and Abu Daawood]

When it comes to reading Surah Al-Fatihah while praying in congegration, the Fatwa of The Permanent Committee for Islamic Research and Fataawa reads: It is obligatory on the one led (in prayer) to recite Al-Fatihah – whether he recites it at the same time the Imaam recites Al-Fatihah in the loud prayers, or while the Imaam is reciting a Surah after Al-Fatihah, or during the Imaam’s pause after reciting Al-Fatihah if he pauses. This is optional. It is better, though, to recite it during the Imaam’s pause after finishing the recitation of Al-Fatihah, if he paused, so as to reconcile between the differing evidence concerning this.