Clip Your Nails the Sunnah Way 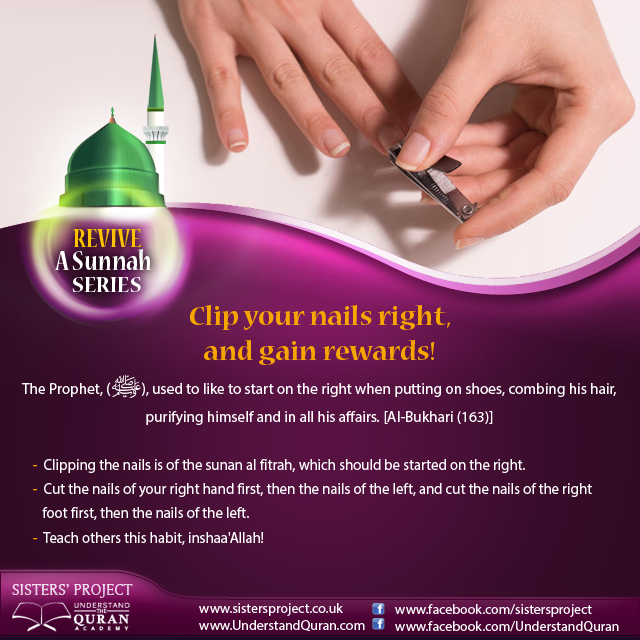 Do you know you can even get rewarded for such a simple act as the way you clip your nails?

Clipping the nails is one of the sunan al-fitrah as Prophet Mohamed, salallahu ‘alayhi wa sallam, said:  The fitrah is five things: circumcision, removing the pubic hair, trimming the moustache, cutting the nails, and plucking the armpit hairs. [Al-Bukhari and Muslim] According to another hadeeth, ten things are part of the fitrah, including cutting the nails.

It’s mustahabb, or recommended, to start on the right, as ‘Aa’ishah, radiyallahu ‘anhaa, said: The Prophet salallahu ‘alayhi wa sallam used to like to start on the right when putting on shoes, combing his hair, purifying himself and in all his affairs. [Al-Bukhari (163)]

Al-Nawawi, rahimahullah, said in al-Majmoo’ (1/339): There is scholarly consensus that clipping the nails is sunnah, and that applies equally to men and women, and to the hands and feet. It is mustahabb to start with the right hand, then the left, then the right foot then the left.

Anas, radiyallahu ‘anhu, said: The Messenger of Allah salallahu ‘alayhi wa sallam, set a time limit for us to cut our moustaches, cut our nails, pluck our armpit hairs and shave our pubic hairs: we were not to leave it any longer than forty days. [Ahmad, Muslim and al-Nisaa’i; this version narrated by Ahmad]

Whoever does not cut his nails is going against the fitrah. The reason behind this is cleanliness and hygiene, because dirt can gather under the nails. It also serves the purpose of making us different from those among the disbelievers who allow their nails to grow long, and from animals that have claws and talons. [Fataawa al-Lajnah al-Daa’imah, 5/173]

As believers we shouldn’t go with the fashion of long nails or fake nails, as these are impermissible in Islam.