Have an Argument? Pray Two Rakah! 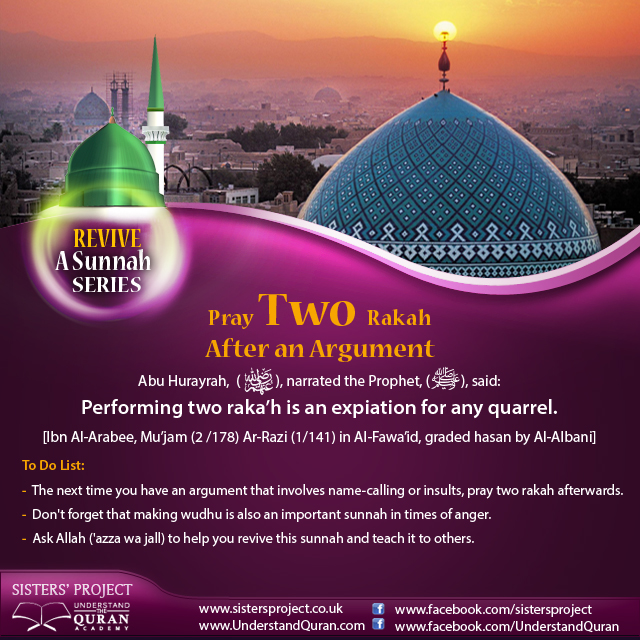 Walking off and feeling angry the rest of the day?

Snapping at everyone who comes near you?

Picking up the phone to blow off steam to someone who really doesn’t need to know?

What do you do after an argument?

You can’t always avoid quarrels, but did you know that there’s a beautiful sunnah to revive afterwards?

Abu Hurayrah, may Allah be pleased with him, narrated that the prophet, peace and blessings be upon him, said:

Al-Alamah Muhammad Abdur Ra’uf Al-Manawee, may Allah have mercy on him, commented on this hadeeth saying: First a person should perform wudu which diminishes the anger. Then he should pray the two rak’ah.[Faydul Qadir hadeeth 3355]

In Arabic, the word لحاء means an argument (or quarrel) in which name-calling, insulting, and abuse occur.  Praying straight after an argument will help bring you calm, plus the immense reward of expiation. It will also remind you of Allah (‘azza wa jall) and your struggle to do what pleases Him. You’ll soon realize that your anger about worldy matters is insignificant compared to Allah’s anger when you deal with your anger in the wrong way.