Revive a Sunnah: Clean Those Teeth and Please Allah! 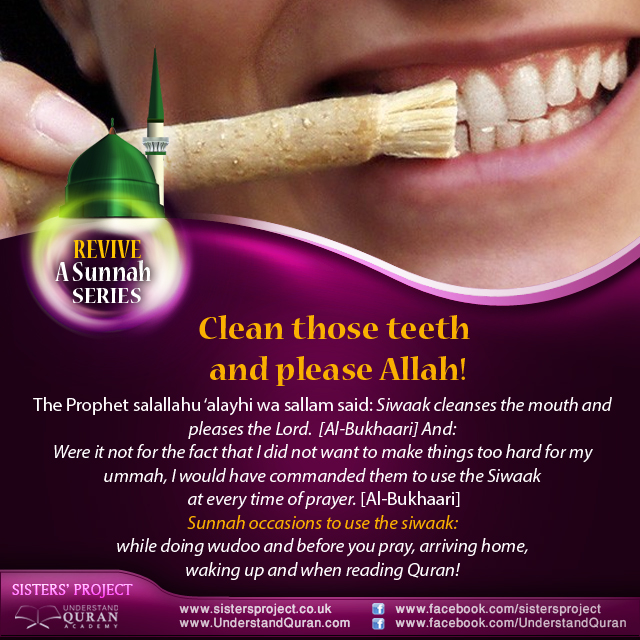 Siwaak means cleaning the mouth and teeth with a siwaak, which is the name given to the tool used. The siwaak is a stick or twig (of the arak tree) used for this purpose.

Now, you don’t have to throw your toothbrush in the bin, but use the siwaak or miswaak (“natural toothbrush”) in addition to it and gain the pleasure of Allah ‘azza wa jall.

It is a sunnah and act of ibaadah for which you will be rewarded!

So get a siwaak, as it is recommended at all hours of the night and day. To gain lots of rewards use it at these recommended times, at least someof the time! (as mentioned in the ahadeeth):

Attributes of siwaak and how to use it

The fuqaha’ have described the siwaak as: a stick of medium length and thickness, no thicker than one’s little finger, and free of knots. It should not be so wet that it will twist, because then it will not remove dirt, nor should it be so dry that it will hurt the mouth or crack during use. No doubt this is describing the ideal, otherwise the reports do not specify any particular type of siwaak. It is permissible to use any kind of siwaak that will do the job.

There is nothing wrong with using siwaak that is flavoured with mint, lemon and so on, so long as they do not cause any harm. But a person who is fasting should avoid using any flavoured siwaak, and should only use natural siwaak when he is fasting.

The fuqaha’ suggested that when using siwaak, a person should start on the right, and use a side-to-side motion rather than up-and-down, as the latter may harm the gums. [Islam Question and Answer, General Supervisor: Shaykh Muhammad Saalih al-Munajjid]

Introduce the siwaak to your children and remember that it is impolite to use it in front of others, so use it with modesty (just as you would not brush your teeth in public).