And What About AFTER Ramadan? 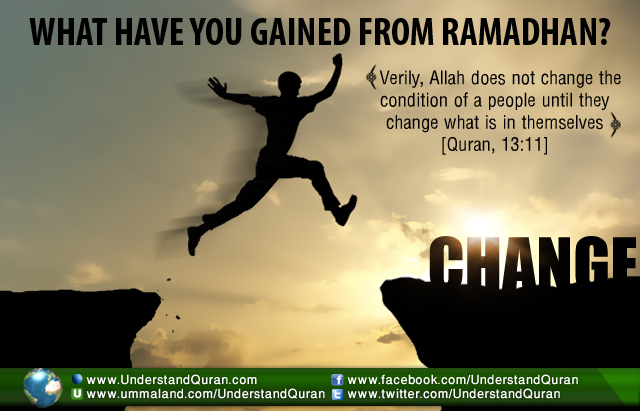 Ramadhan is over. How do you feel?

When the last day of Ramadan was announced, something happened. A lot of us started to change; people started giving up, blaming Shaytan for their own weaknesses.

In this week’s central ayah Allah ‘azza wa jall says: Indeed, Allah will not change the condition of a people until they change what is in themselves. [Quran, 13:11] If you are hit by the post-Ramadhan blues, it’s time to hit back. Here’s how in shaa Allah!

When you feel Ramadhan’s ending means going back to all your old ways, you need to realize something quick: Shaytan has no power to force mankind into committing sins! Allah ‘azza wa jall says to him: Certainly, you shall have no authority over My slaves, except those who follow you of the ghaawoon (those who go astray; criminals, polytheist and evildoers). [Quran, 15: 39-42] All Shaytan can do is call you to misguidance and make it look attractive to you. Yes, the devils are unlocked again now and the real test comes; how will you deal with it

Ramadhan is finished and you might already feel your emaan decreasing, taqwa dripping from your heart, your desires taking over again. Take some inspiration from this and realize your own strength.

The Prophet salallahu ‘alayhi wa sallam said: The believer can seize the forelock of his Shaytan as one of you seizes the forelock of his camel whilst traveling. [Ahmad]Ibn Katheer explained: What is meant by seizing his forelock is defeating him and overwhelming him, as one does with a camel when it runs away, then you seize it and overpower it. [Al bidaayah wa-n nihaayah]

Abul-Faraj ibn al-Jawzi rahimahullah said: Know that the likeness of Iblees with one who is pious is like a man who is sitting with food and meat in front of him, and a dog comes near him. He tells it, ‘Get away!’ and it goes. Then it comes to another man who is weak in faith and every time he tries to shoo the dog away, it does not go. The former is like a pious man whom the shaytan approaches, and his dhikr is enough to banish him; the latter is like the one who is weak in faith; the shaytan does not leave him because of his weakness of faith. We seek refuge with Allah from the shaytan. [Talbees Iblees, p.48]

So be confident and know you are stronger than Shaytan. Increase in saying ‘a oodhu billahi minash-shaytanir-rajeem’ in your daily life, and mean it!

The salaf (pious predecessors) used to supplicate six months after Ramadhan for Allah ‘azza wa jall to accept their deeds in Ramadhan. For the next six months they would supplicate to grant them the blessing of being alive in the coming Ramadhan. So keep making dua regularly that your fasting may be accepted from now on

Ramadhan is just a demonstration of what you are able to do each day; it is all about willpower. Remind yourself: Whoever fasts Ramadhan out of faith and in the hope of reward, his previous sins will be forgiven [Al-Bukhaaree]. And think what you would do if your sins were all forgiven? Would you go back to your old ways?

Allah ‘azza wa jall gives us these treasures hidden in our every year. Fast one month a year and all your sins can be forgiven. Isn’t that an amazing deal? The Prophet salallahu ‘alayhi wa sallam said:Whoever fasts the month of Ramadan and then follows it with six days of fasting during the month of Shawwal will be as if he fasted for the year [Muslim]. Fast a month plus six days = equals fasting 365 days. Be clever, look for these lucrative offers and grab them with both hands!

You just knew you had to get up for fajr in Ramadhan (not only because you had to have suhoor anyway), but how could you miss a prayer in Ramadhan? We worship Allah ‘azza wa jall and not Ramadhan; so give yourself no other option, put your obligatory prayers first and on time. This is your no-matter-what priority!

And your renewed relationship with the Quran doesn’t end here, it just started. Give yourself no other option than opening the Quran each day. Allah ‘azza wa jall knows what hurts you or causes you to feel down; for each of your diseases is a cure and the Quran is one such source of healing.  The Prophet salallahu ‘alayhi wa sallam said: Make use of the two cures, Quran and honey. [Ibn Majah]

Finally: don’t fall apart when you make a mistake

You will slip— maybe you already have. Know that Allah ‘azza wa jall gave you a tool for this, and it is called tawbah (repentance). Never despair or give up on yourself, thinking: see, I cannot do this. When you missed that prayer, didn’t even open the Quran or started backbiting again, you must realize it and seek the forgiveness of Allah from your heart. Then ask Allah to give you the tawfeeq (ability) to get back on track, quick.  Don’t give up praying on time, reading Quran each day, etc. just because you missed a couple of opportunities. Get yourself back together and try again, and ask Allah to help you!Praying you will benefit.
Khawlah bint Yahya – United Kingdom