The Importance of Fajr, Post-Ramadan! 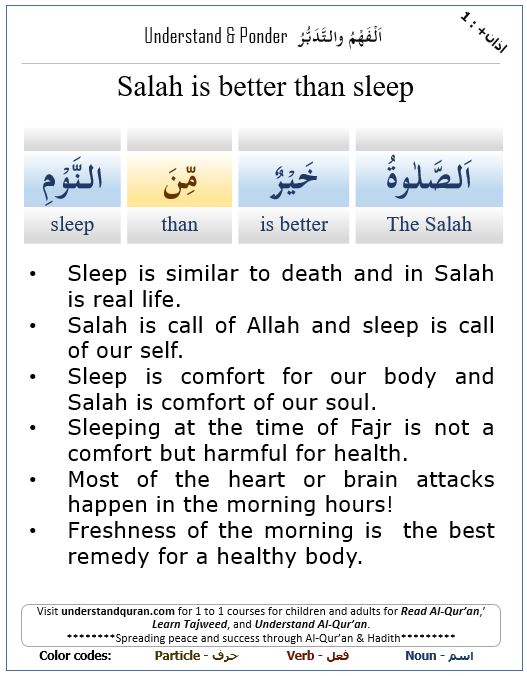 One of the most beautiful aspects of the blessed month of Ramadan is the praying of Fajr by the ummah in multitudes. Almost overnight, the musallis in masajids were full in Ramadan. It is interesting and heart-warming to see such a drastic change. However, there is a flipside.

The fact is that despite the great training in the University of Ramadan during the intensive month-long course, on the very day of Eid the Masjid is empty for Fajr. All the ibadah for the whole month comes crashing down in just a day.

So why does this happen? We could theorize a lot, but perhaps it is that we have lost the importance of Fajr in our lives. Let us discuss a few of the reasons why we should aim to make Fajr even after Ramadan!

Witnessed by double the number of angels
Allah says in the Quran, “Indeed, the recitation of Fajr is witnessed.” [1] However, is not every prayer and every recitation witnessed? Why does Allah single out Fajr specifically for this mention in the Quran? After all, Allah doesn’t mention something unless there is a strong reason for it!
Imam as-Suyuti states, “The meaning of witnessed here means that both the angels of [previous] night and the angels of the [new] morning intently listen to the Fajr prayer being recited aloud because of its great status and virtue.” [2] Allah sends different angels for the night and the day, and it is only at Fajr that angels of both the night and the day witness it and listen to the recitation.

Jannah is the reward
The Prophet sallallahu alayhi wasallam said, “Whoever prays the two cooler prayer times (i.e., Fajr and `Asr) will enter Paradise.” [5] The scholar, Ibn Allan comments on the hadith saying, “Fajr and ‘Asr were specified since they are two times when one can easily miss the prayer: whether they are lost in sleep during Fajr or engrossed in trade and work at ‘Asr. It is understood that the one who prays these two, usually prays all five daily prayers.
Finally, the reward mentioned in the hadith indicates that the one who regularly prays Fajr and ‘Asr can be expected to have a good ending to his or her life; they die upon faith as a Muslim. Which of us would not be eager to rise for the Fajr prayer if we truly understood the benefits: a death on faith and eternal success?” [6]

Safety from Hellfire
A promise of Paradise doesn’t always equal safety from hellfire, as Muslims can be sent into hellfire to be purified of their sins and then enter paradise. However, even a second of hellfire would be a terrible chastisement on our body and something beyond our wildest imaginations! Therefore, it is important to see those deeds which mention “will not enter hell” as a reward as that is a guarantee of entering Jannah without hisaab. The Prophet sallallahu alayhi wasallam said, “Whoever performs the Prayer before the rising of the sun [Fajr] and before its setting [‘Asr], will not enter the Hell.” [7]

A Sign of Sincerity in Faith and Safety from Hypocrisy
Fajr is in the depths of the morning, right at dawn. It is something which isn’t readily witnessed by people around us unless they themselves pray Fajr. Therefore, the urge to show off is less, and therefore it is a big test of our sincerity as mentioned above in the quote from at-Teebi. Moreover, the Prophet sallallahu alayhi wasallam said, “The most burdensome prayers for the hypocrites are ‘Isha and Fajr, but if they only knew what they contain, they would come even if they had to crawl.” [8] This is a very stern warning from Allah and His Messenger sallallahu alayhi wasallam as we all very well know the consequences of hypocrisy aren’t too different from the consequences of disbelief.

So, what can be done? I hope I haven’t made you hopeless with the article so far. It is also important to remember that Allah doesn’t expect from us perfection but requires us to make an effort. So, what effort can we make?
In brief:
• Sleeping Early
• Setting multiple alarms
• Making dua to Allah to make Fajr easy on us
• Major regret if one has missed out on it
• Reminding oneself of the importance of Fajr
• Getting a friend or family member to waking you up
Don’t forget to avail our Ramadan special discounted offers which are going to be closed soon, get them HERE.
May Allah help us continue Ramadan productivity throughout the year Aameen Ya Rab!