The Best of Islam: How Dhul Hijjah Can Make You a Better Muslim 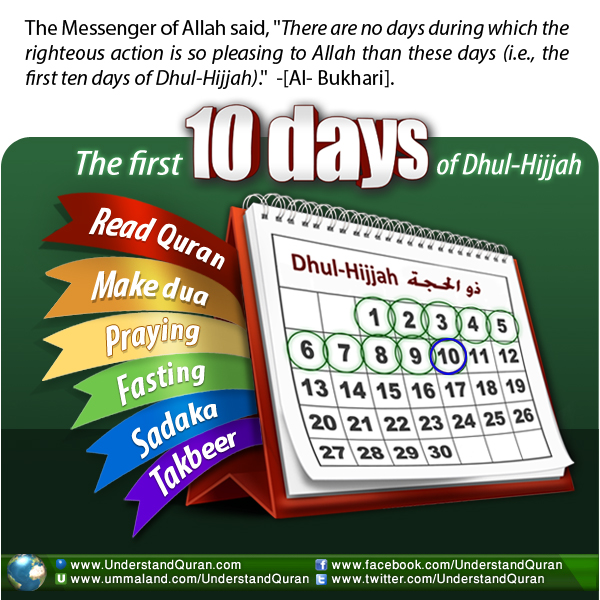 Prophet Muhammad (saw) stated, The best of you are those who possess the best of characters. [Tabarani, Sahih)

The best character is achieved by doing good deeds. The best of deeds are deeds done during the first 10 days of Dhul Hijjah, and the best of days is the ninth day of Dhul Hijjah (The Day of Arafah).  As these days of excellence have loomed, let’s revive the sunnah of practicing and instilling its spirit as the sahabas did, thus re-molding ourselves into better Muslims and helping us reap great benefits and rewards.

The Importance of the First Ten Days of Dhul-Hijjah

There are no days which are more beloved to Allah than the first 10 days of Dhul Hijjah. [Bukhari]

Allah (swt) takes an oath on the ‘The Ten Nights’ in surah fajr  [Quran 89:2], which refers to the the first ten days of Dhul Hijjah, and when Allah(swt) himself takes an oath on anything, then it’s to highlight its excellence.

Ibn Hajar says in Fath al-Bari: The most apparent reason for the ten days of Dhul-Hijjah being distinguished in excellence is due to the assembly of the greatest acts of worship in this period, i.e. salawat (prayers), siyam (fasting), sadaqah (charity) and the Hajj (pilgrimage), increase in tahlil (to say la ilaaha illallah), takbir (to say allahu akbar) and tahmid (to say alhumdulillah).” In no other periods do these great deeds combine.

The barakah are at the highest within these nights, and the rewards are the greatest.

Preparation of the Sahabas for the Ten Nights

Abdullah ibn Abbas reported the Prophet (saw) to have said: Of all the days Allah has created that we do good deeds, none has reward more than that of the first 10 days of Dhul Hijjah. The Sahabas asked, ‘Oh Prophet, even more than fighting in the cause of Allah? The Prophet(saw) answered in affirmative and said except in the case of a man who went out, giving himself and his wealth up for the cause(of Allah), and came back with nothing.’ This person has reward that is tantamount to that of First 10 days of Dhul Hijja.  [Sahih Al-Bukhari]

Let’s analyze the application of the sahabas regarding whom the Prophet (saw) stated that they were the best of generation and the foremost people.

Recommended acts during these days

Jabir (r.a) reported that the Prophet (saw) said the best of all days is Day of Arafah.

When he witnesses the descent of Allah’s angels and Allah’s forgiveness of sins, Iblis weeps. Hence, for a believer it’s requisite to follow the Sunnah and implement it in our lives by exhibiting the best of Islam. Acts of excellence are dearer to Allah (swt) due to which on the 9th day of dhul hijjah, Allah will assemble the angels and make them witness the glory of Islam on the earth and retort them saying this is why I created humans, Subhan Allah.