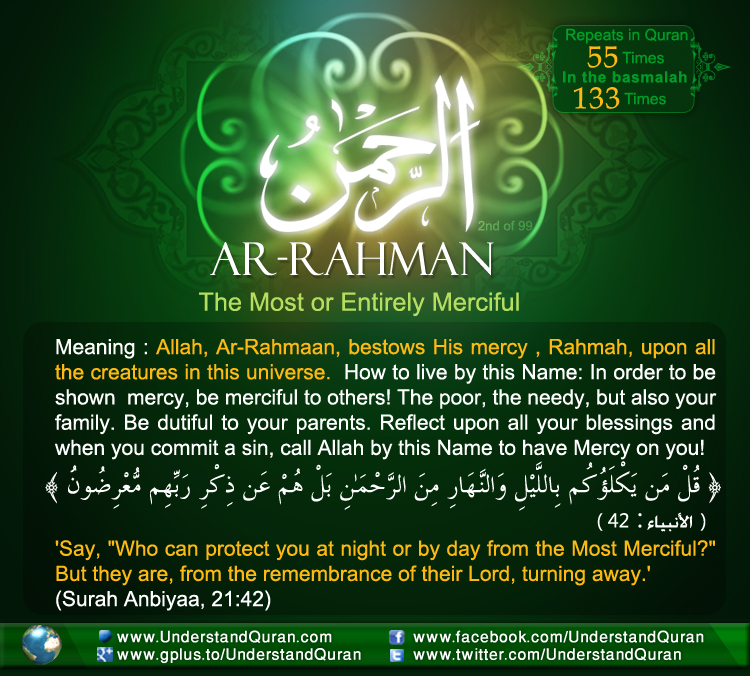 Allah calls Himself Ar-Rahmaan— The Most Gracious, the intensely Merciful— on 55 occassions in the Quran and 133 times in the basmalah. Ar-Rahmaan is the One whose intense and perfect Mercy embraces the whole creation!

The Most Gracious, Most Lovingly Beneficent

This root appears 339 times in the Quran in nine derived forms. Examples of these forms are rahima (“bestows mercy”), al-arhaam (the wombs”) and rahmatan (“mercy”).

Linguistically, rahmaan shows intensity (thus the ending is –aan). For example ghadbaan means extremely angry. Ar-Rahmaan points out to the intensity, abundance, and vastness of the mercy (rahmah) of Allah ‘azza wajal, and the attribute of grace is inseperable from the Almighty.
Allah first mentioned His name – Allah – that is exclusively His and described this name by Ar-Rahmaan, which no one else is allowed to use, just as Allah said, Say (O Muhammad) invoke Allah or invoke Ar-Rahmaan, by whatever name you invoke Him (it is the same), for to Him belong the Best names. [Quran, 17:110] [Tafseer ibn Katheer]

Ar-Rahmaan Himself says: [This is] a revelation from the Entirely Merciful, the Especially Merciful . . . [Quran, 41:2] That Day, no intercession will benefit except [that of] one to whom the Most Merciful has given permission and has accepted his word. [Quran, 20:109]

The mercy of Allah

Explaining the mercy of Allah, ar-Rahmaan, the Prophet salallahu ‘alayhi wa sallam said: Allah has divided mercy into 100 parts, and He retained with Him 99 parts, and sent down to earth one part. Through this one part creatures deal with one another with compassion, so much so that an animal lifts its hoof over its young lest it should hurt it. [Al-Bukharee] Be amazed at the fact that the other 99 parts are yet to come and they are with Allah Himself. You will not enter Jannah because of your deeds, but by the rahmah of Allah only.
The Prophet salallahu ‘alayhi wa sallam also said, When Allah created the creatures, He wrote in the Book, which is with Him over His Throne: Verily, My Mercy prevailed over My Wrath. [Al-Bukharee]

1. Never despair.
No matter how many sins you commit, He can have mercy on you if you just turn to Ar-Rahmaan. Every mistake or sin is an opportunity and a sign that it’s time to get closer to Him! Whenever you commit a sin, call Him by this name to have mercy on you and remind yourself of one of the most optimistic ayaat in the Quran: Say, O My servants who have transgressed against themselves [by sinning], do not despair of the mercy of Allah. Indeed, Allah forgives all sins. Indeed, it is He who is the Forgiving, the Merciful. [Quran 39:53].

2.Be merciful to others.
Be merciful to not only the needy but also to your family if you want the mercy of Ar-Rahmaan! The Prophet salallahu ‘alayhi wa sallam said: Allah will not be merciful to those who are not merciful to the people. [Al-Bukharee] The Prophet salallahu ‘alayhi wa sallam gave a simple formula on how to deal with others: Whoever wishes to be delivered from the fire and enter the garden should die with faith in Allah and the Last Day and should treat the people as he wishes to be treated by them. [Muslim] So no matter how big or small, think how you would like to be treated in the same situation.

3.Keep family ties.
Be active in being in touch with your family: regularly visit, call, and exchange gifts, and never abandon your family. The Prophet salallahu ‘alayhi wa sallam said:  . . The womb (rahm) is derived from the Merciful, so whoever keeps relations with his family then Allah will keep relations with him, and whoever abandons his family then Allah will abandon him. [At-Tirmidhee] Be the first to make up after an argument. The Prophet salallahu ‘alayhi wa sallam said: It is not permitted for a Muslim to forsake his brother for more than three (days); whoever does this and dies, he will enter Hell. [Abu Dawud]

4. Be good to your parents.
Daily ask Ar-Rahmaan to have mercy on your parents! Ar-Rahmaan instructs you: And your Lord has decreed that you not worship except Him, and to parents, good treatment. Whether one or both of them reach old age [while] with you, say not to them [so much as], “uff,” and do not repel them but speak to them a noble word. And lower to them the wing of humility out of mercy and say, “My Lord, have mercy upon them as they brought me up [when I was] small. [Quran, 17:23-24]

5. Recognize mercy and be grateful.
Reflect upon Allah’s mercy when you see all the blessings around you; food, water, oxygen. Only Ar-Rahmaan can make it rain and He made the rain sweet and not salty. When you love someone or are loved, know that this feeling was manifested by the mercy of Allah. Think about the mercy of Ar-Rahmaan in sending the Prophet Muhammad salallahu ‘alayhi wa sallam to you, and be intensely happy and grateful to have such a merciful Lord.

Note: We have to be careful if translating the names of Allah ‘azza wa jall into a different language. The name Ar-Rahmaan is most commonly translated as The Most Merciful, The Entirely Merciful, The Most Gracious.

O Allah, Ar-Rahmaan, we know that Your mercy is perfect. Let us never despair of Your mercy, guide us to be merciful to others, to maintain our family ties, and to seek Your pleasure. Enable us to reflect on Your mercy around us, adorn us with gratefulness, and enter us into Paradise by Your mercy, ameen!

PS: Did you already sign up to our newsletter? Sign up now and receive the free welcome gift to the Series The Names of Allah!