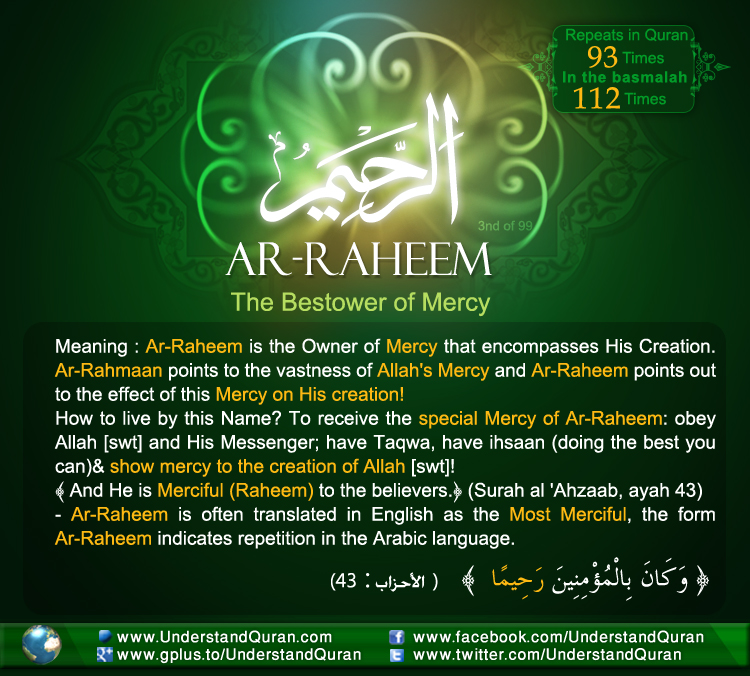 Allah calls Himself Ar-Raheem— The Bestower of Mercy, The Most Compassionate— on 93 occasions in the Quran, 112 times in the basmalah. Ar-Raheem is the One who bestows His continuous mercy on all of creation and who bestows even more grace and greater rewards in response to the good deeds of the believers!

The Most Compassionate, the Bestower of Mercy

This root appears 339 times in the Quran in nine derived forms. Examples of these forms are turhamoona (“receive mercy”), ruhman (in affection”), and ar-raahimeena (“[of]those who show mercy”).

Linguistically, raheem shows continuity or repetition (the ending of –ee(m)). For example jameel means beautiful and kareem means honourable or generous, which reflect characteristics or states. Related to Ar-Rahmaan, Ar-Raheem refers to the action or the effect of Allah’s intense mercy on creation, indicating how this mercy encompasses creatures. Imagine a shower of blessings, and imagine the shower as very intense and continuous. Allah is the intensely and the continuously Merciful.

The merciful of the creation

Certain names Allah ‘azza wa jall uses only to describe Himself. He says: Say: Invoke Allah or invoke Ar-Rahmaan, by whatever name you invoke Him (it is the same), for to Him belong the Best names. [Quran, 17:110] As for Allah’s name Ar-Raheem, Allah ‘azza wa jall has described others by it: Verily, there has come unto you a Messenger from amongst yourselves. It grieves him that you should receive any injury or difficulty. He (Muhammad) is anxious over you (to be rightly guided) for the believers kind and merciful. [Quran 9:128]

Being kind to others is a blessing

Know that kind and compassionate treatment is liked by Ar-Raheem and is in fact His blessing from Him to you. A person who is hardhearted is deprived of this divine blessing and mercy. Aishah radiyallahu ‘anha reported that some Bedouins came to the Messenger of Allah salallahu ‘alayhi wasallam and asked, ‘Do you kiss your children?’ He replied, ‘Yes.’ They then said: ‘By Allah, we do not kiss them.’ He then replied, ‘I cannot help you if Allah has snatched kindness from your hearts.’ [Al-Bukharee, Muslim] So open up your heart to others and constantly warm your heart with the remembrance of Allah ‘azza wa jall.

1. Obey Ar-Raheem, hold onto the Quran.
And He is Merciful (Raheem) to the believers [Quran, 33:43]. Allah ‘azza wa jall mentions ways for you in the Quran to receive His special mercy as a believer. He says: and obey Allah and His Messenger so that you all may receive Mercy [3:132]. This mercy is only reserved for those who try their best to hold on to the guidelines, prohibitions, and commandments mentioned in the Quran and Sunnah. And this is a book, We have sent it down as one blessed, so follow it and fear Allah so that you all may receive Mercy [6:155].

2. Strive for taqwa.
O you who have believed, have taqwa of Allah and believe in His Messenger; He will [then] give you a double portion of His mercy and make for you a light by which you will walk and forgive you; and Allah is Forgiving and Merciful [Quran, 57:28]. Taqwa can be described as consciousness which inspires you to be on guard against wrong action and eager for actions which please Allah ‘azza wa jall and to stay away from those actions which displease and anger him. Tips to increase your taqwa are: be alert to whatever may divert you from Allah, and be alert to your desires that may lead you to the forbidden. Ascribe each success, material or spiritual, to Allah only, and long for His pleasure in everything you do, big or small. Renew your emaan by reflecting on Ar-Raheem’s creation and remember death by living each day with the knowledge it can happen anytime.

3. Pray four units of prayer before ‘asr.
The Prophet salallahu ‘alayhi wa sallam said: May Allah have mercy on one who prays four raka’aat before the ‘asr Prayer [At-Tirmidhee].

4. Listen to the Quran attentively.
And when the Quran is recited, listen to it with attention, that you may receive mercy [Quran, 7:204]. Have you noticed the effect on your heart when you sit and listen to the Quran with your ears and heart, with no distractions around you? The more you respect and honour the Book of Allah, the more cure, guidance and mercy you will receive through it.

5. Turn to Ar-Raheem.
Whenever Ar-Raheem gives you a trial, know that no one can give you a way out but Him, so turn to Him as soon as hardship hits you. And if Allah should touch you with adversity, there is no remover of it except Him; and if He intends for you good, then there is no repeller of His bounty. He causes it to reach whom He wills of His servants. And He is the Forgiving, the Merciful [Quran, 10:107]. No matter what sin you commit, Allah ‘azza wa jall forgives you if you repent of it. That’s the beauty of Al-Ghafoor Ar-Raheem.

6. Ask Ar-Raheem for compassion.
The Prophet salallahu ‘alayhi wa sallam said: He who is not merciful to our young (people) and who shows no respect to our elderly is not one of us. [At-Tirmidhee] Ask Allah ‘azza wa jall to bless you with a soft heart and to enable you to feel compassion towards your relatives, friends, and the whole Muslim nation. How many do not feel responsible or attached to the ummah? The Prophet salallahu ‘alayhi wa sallam said: The similitude of believers in regard to mutual love, affection, fellow-feeling is that of one body; when any limb of it aches, the whole body aches, because of sleeplessness and fever. [Muslim]

O Allah, Ar-Raheem, we know that You bestow Your mercy perfectly and continuously on all that exists. Guide us to hold onto Your book and the sunnah so we may attain your special mercy and adorn our actions, speech, and thoughts with a deep sense of taqwa. Make us turn to You at all times, asking for Your Mercy, and make us compassionate so we will enter through the gates of Your paradise by Your mercy, ameen!

PS: Leave a reply below on what the Name Ar-Raheem means to you in your daily life!

PPS: Did you already sign up to our newsletter? Sign up now and receive the free welcome gift to the Series The Names of Allah!