Learn Tajweed and Beautify the Quran 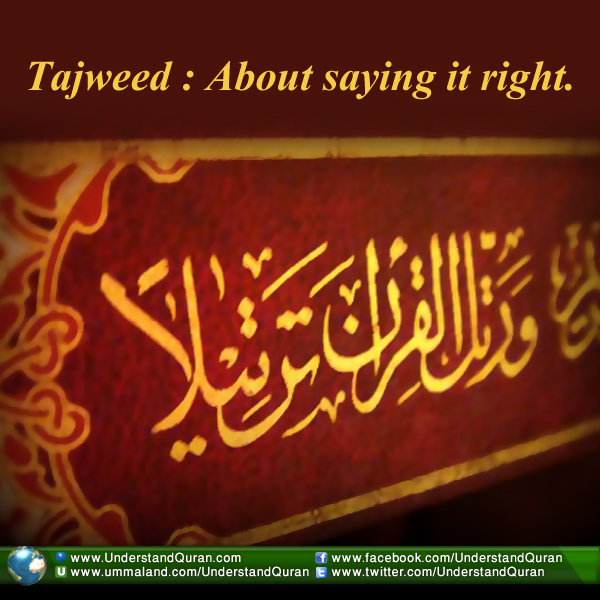 It’s depressing to observe how most of us just go on reciting the Holy Quran without realizing the immense pleasure it can bring to our busy hearts. So why don’t we feel content when reading our Holy Quran?

1. Improper pronunciation: That’s it! Just think of reading an article. If you couldn’t pronounce the letters properly, would you continue reading it with interest? Certainly not!

2. Not knowing what it means: If we can’t understand what we’re reading, we feel bored after a while.

Of the above two factors, improper pronunciation creates a huge impact when reading the Holy Quran, so it’s a must to learn tajweed and to recite the Holy Quran as it should be recited.

Briefly, we can define tajweed as elocution. Technically we can describe it as the pronunciation of each letter according to its own set of rules.

I’ve seen many people considering that it’s not so important to learn tajweed. They think it’s not necessary and that just reciting will bring them rewards. But ayahs and hadiths teach us that learning tajweed is necessary.

So what is its true recital? It is to recite exactly in the way it was revealed, and this ayah shows how Allah (swt) desires to see His book recited.

Ali ibn Abi Talib said in the explanation of this ayah that tarteelan, which means measured recitation, is defined as the tajweed of the letters and knowing where to stop them correctly.

The Quran will either testify in your favour or against you. This is quoted from a hadith in Muslim, which means that we all should try to recite the Quran properly. If we do so, The Quran will intercede for us on the Day of Judgement. If not, there is no doubt that it will act against us.

When Umm Salamah was asked about the recitation of Prophet (SAWS), she expressed his recitation as, Clearly distinguished letter by letter . . .

Now what do you say? Is it necessary or recommended?

2. The Best of People: Uthmaan (ra) said that the Prophet (saws) said, The best of you are the ones who learn the Quran and teach it to others. [Bukhari]

4. Way to Paradise: The Prophet (saws) said, A reader of the Holy Quran will be called upon on the Day of Judgement: ‘Start reading the Holy Quran and ascend the (high) stages of the Heaven, and recite slowly as you had been reading in the world, as your abode will be where the last verse of your recitation will end.’ [Abu Daud and Tirmizi]

5. Mental and spiritual peace and satisfaction: Hazrat Bra’a ibn ‘Aazib (ra) states that a person was reading Surah Al-Kahf and his horse was tied near him with two ropes. It so happened that a patch of cloud reached the horse and covered it. The animal began jumping. Next day in the morning the man went to the Holy Prophet (saws) and related the incident to him. The Holy Prophet (saws) said, This was ‘Sakeenat’ (mental and spiritual peace and satisfaction) that came down as a result of the recitation of the Holy Quran. [Bukhari and Muslim]

Once you’ve learned tajweed, you can go through this checklist to see whether you’re perfect with your tajweed or not:

1. The articulation points of the letters: If you know how to pronounce each word distinctly, then your knowledge of tajweed is good.

2. The characteristics of the letters and the usage of the tongue: If you’re familiar with the features of each letter and your tongue automatically moves to it, then your tajweed sounds better.

3. Rules change in the letters: If you know the rules change in each letter due to the influence of other letters and know where to stop them, then your tajweed is the best!

Don’t worry . . . If you find it difficult to read the Holy Quran, Don’t worry my dear brothers and sisters. You have a double reward because:

1. You recite the Quran.

2. You’re trying your best to learn even if it’s hard for you.

So what’s more? Start learning and feel the tremendous pleasure you receive when beautifying the Quran.