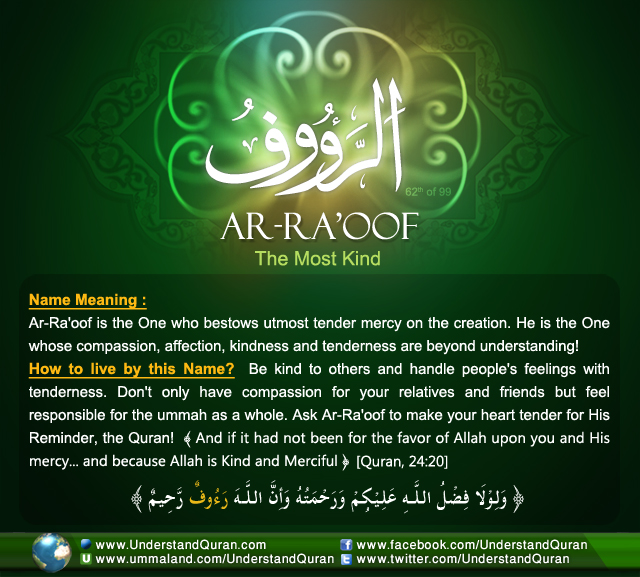 Allah calls Himself Ar-Ra’oof—The Kind, The Compassionate — on ten occasions in the Quran. He is the One who bestows mercy with the utmost tenderness. Ar-Ra’oof has beautiful pity on us, with which He gently warns us, withholds from us, and instructs us to all that is good!

The One Who is Most Kind, the Tenderly Merciful

This root appears 13 times in the Quran in two derived forms.  Examples of these forms are rafatun (pity for them) and rafatan (compassion).

Linguistically, ra’fa refers to the  tenderness, kindness, and affection with which Allah ‘azza wa jall bestows mercy on us. Al-Ghazali mentioned that Ar-Ra’oof has pity, and that pity is the intensification of mercy. It has the same meaning as raheem though in a more intense form. Ar-Ra’oof is the One who bestows pity and mercy on us in many different forms, including warnings and withholding, for us to be guided to success in this world and the next!

The infinite kindness of Allah

Of the ten  times, Allah’s Name Ar-Ra’oof is mentioned eight times with His name Ar-Raheem (The Bestower of Mercy) in the Quran.  How can we understand the concept of ra’fa and the concept of  rahma (mercy)? After a calamity hits us, Ar-Raheem has mercy on us. Ra’fa refers to Allah ‘azza wa jall taking care of us and warning us so that we can protect ourselves from His own punishment.

Ar-Ra’oof says: On the Day when every person will be confronted with all the good he has done, and all the evil he has done, he will wish that there were a great distance between him and his evil. And Allah warns you against Himself (His punishment) and Allah is full of kindness to (His) slaves [Quran, 3:30] How merciful is this? Ar-Ra’oof warns us how to avoid His punishment out of pure kindness and affection, by sending us prophets and messengers for advice, sending us the Quran and guiding our hearts when we turn to Him.

An example was given about ra’fa and rahma; a parent warning their child to dress warm in winter so that they won’t suffer from the cold, is the concept of ra’fa. Whereas if the child gets ill and the parent’s heart that aches for the child and they do everything to find a medicine, that’s merciful (rahma).

Do you reflect on the mercy of Ar-Ra’oof in guiding you to be a Muslim each day? And indeed, it is difficult except for those whom Allah has guided. And never would Allah have caused you to lose your faith. Indeed Allah is, to the people, Kind and Merciful [Quran, 2:143] What about all the times He warned you through certain signs in your life, like that “feeling” you should not go to a certain place? Reflection is ‘ibaadah.

2. Learn from the mercy of the prophet.

Ar-Ra’oof described the Prophet salallahu ‘alayhi wa sallam as ra’oofun raheem: There has certainly come to you a Messenger from among yourselves. Grievous to him is what you suffer; [he is] concerned over you and to the believers is kind and merciful. [Quran, 9:128] Study the seerah to learn how the prophet salallahu ‘alayhi wa sallam dealt with His companions, family, and even his enemies!

3. Increase your heart in mercy.

Be kind to others and handle people’s feelings with tenderness. Sometimes you are so busy with your own life and your own family and friends that you forget about others. The connection you feel with the Muslim ummah is a mirror for your emaan.  Read about the situation of your fellow brothers and sisters around the world and think of ways of how to support them. For example in every witr prayer, make sure you remember the ummah in your dua.

Someone once said: All that time I was waiting for someone to do something about it. Then I realized that someone was me. Ar-Ra’oof has pity on us and He even warns us on how to avoid His punishment. If you see your brother or sister low in emaan or even going astray, feel concerned for them and advise them with kindness and care. Forbidding evil and enjoining good is a duty upon you; how seriously do you take it? You are the best community ever brought forth for mankind (in that) you command the proper and forbid the improper and believe in Allah. [Quran, 3:110] Be inspired by the ra’fa of Allah ‘azza wa jall to help warn and guide others as much as you can!

5. Open your heart to the Quran.

Allah ‘azza wa jall says: It is He who sends down upon His Servant [Muhammad] verses of clear evidence that He may bring you out from darknesses into the light. And indeed, Allah is to you Kind and Merciful. Ask Ar-Ra’oof to make your heart tender for His Reminder, the Quran!

Ar-Ra’oof mentions a beautiful supplication in the Quran, using this name: And [there is a share for] those who came after them, saying, Our Lord, forgive us and our brothers who preceded us in faith and put not in our hearts [any] resentment toward those who have believed. Our Lord, indeed You are Kind and Merciful. [Quran, 59:10]

Memorize this beautiful dua’, call upon Allah ‘azza wa jall with it, and teach it to others!

O Allah, Ar-Ra’oof, we know that Your kindness encompasses us. Increase our hearts in mercy and aid us in forbidding evil and enjoining good in ways most pleasing to You. Make us reflect Your ra’fa, open our heart for the Quran and make us of those who follow Your warnings so we can avoid Your Punishment and enter Paradise safely, ameen!