What the Cricket World Cup Can Teach Us About Life 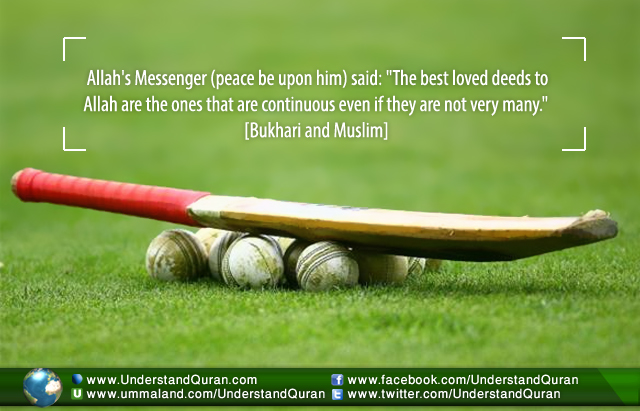 Imam Ibn al-Jawzi mentions that a believer sees the signs of Allah in everything that he witnesses. So, for example, when one sees the break of dawn and sunrise, he or she may think of how at the end of darkness there is always light, and similarly at the end of hardship is ease.Sunset might remind a believer that one day he will pass away as well.

Similarly, world events remind us of Allah and teaches us lessons about life too! Last year, I wrote an article on how the FIFA World Cup taught me about Allah. This year, I would like to reflect on the cricket World Cup, enjoyed very much in the Indian Subcontinent, as well as in Australia, New Zealand, England, South Africa, and the Carribean.

The first lesson that I learned from cricket is that success is based on the team. In our life, we can never be one man shows. Even the Prophets of God, peace be upon them, were entitled with comrades and companions who supported them and helped their cause. Each member of the team has a certain role, and only when they all come together can they be successful.

Divided teams with low morale usually fail, even if the individual quality is quite well. In turbulent times for the Muslims, it is essential for us to take this point. The Muslim Ummah consists of different people of different backgrounds with different skills, and if we could work together, we could do much better for ourselves and the world at large.

Team play also reminds me of strategy and how important it is to have a plan in life. An old saying goes, “If you fail to plan, you have planned to fail.” That is true for our spiritual, family and professional lives.

If we have our day planned and know exactly when we are going to pray and where, it is more likely that we will have greater quality in our prayers. If we have a week planned ahead of us, we are more likely to have a fulfilling time, and better leisure time as well!

Never look down on a “weaker” opponent

This World Cup has had multiple upsets. Smaller and supposedly weaker cricketing nations beat the bigger nations. And that has a life lesson to teach us. At times we look down at other people for being supposedly “weaker”, “of lower intelligence”, “having lower faith” etc.

In a hadith of Sahih al-Bukhari, the Prophet peace be upon him said that one having an atom’s weight of arrogance will not enter paradise. He was asked about the meaning of arrogance. He responded, “To reject the truth and looking down upon the people.”

It is among the worst of sins to look down upon someone else because of their status. It is what Shaytan did to the Prophet Adam peace be upon him. He was arrogant, and the ones who are arrogant are usually brought down to earth.

It is about being consistent

Some teams, some players are great in individual matches but over a period of time they cannot keep up their quality. Life is about consistency. The most successful people in any field are those who are consistent with their lives. Small consistent improvement over a long time is better and more long lasting than bursts of greatness from time to time.

The best players in cricket were defined by their consistency in delivering most of the time. Sure, they all had off-days, but in general they were good. Our faith is similar. It is not enough to pray one day, five times a day with lots of extra prayers, lots of Quran etc. Rather, our faith wants us to pray every single day, five times a day, even if it is for a short time.

That consistency is part of our faith. The Prophet peace be upon him said that the most beloved deeds to Allah are those deeds which are done consistently, even if they are small. [Narrated by Bukhari and Muslim]

Take the initiative and be proactive, not reactive

The best captains and teams are those who are proactive in their decision-making, take the initative, and attack the game rather than those who wait for something to happen and reacting to it.

Most Muslims today are very reactive; we only talk about the Prophet when someone insults him. We remind people of Allah only when they insult Him. We only teach people Islam when there is an extremist attack.

If we had taken the initiative and taught people Islam properly then perhaps there would have been less attacks, less extremism, less violence all around. The Prophet peace be upon him was always proactive, and that was a hallmark of all successful Muslim generations.

No matter how bad things have become, there is always hope

So many times in cricketing history, a team which was down and out brought out their best from seemingly nowhere and won the game. And as such, cricket is often called “the game of uncertainty”. Life is a game of uncertainty too! It is never certain where we will be heading in life tomorrow. So, in spite of how bad things may become, remember, success is always possible. Try your hand, give your best shot and put your trust in Allah, and you never know where you end up. And as Muslims, even if we “fail” in our endeavours, our good intentions are recorded by Allah nonetheless, so it’s a complete win-win!

“If you marry a phenomenal work ethic with the talent you are born with, then you can achieve almost anything” – Harsha Bhogle

This was a quote from one of the best ever cricket commentators in the game about one of the greatest cricketers ever- Sachin Tendulkar, and how right it is!

I am a firm believer that to each one of us Allah has given us a unique talent in something. And if we are to work to find out what that talent is, hone our skills about it, and put in a lot of hard work, then we can all achieve great things in life by the permission of Allah!

Those were some of many lessons that the game of cricket has taught me. What has it taught you? Share in the comments!